Reaper (Heart of the Swarm) 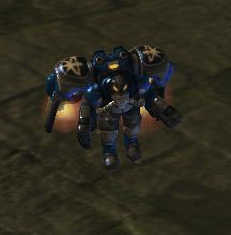 Unit Information
Type:
Ground Unit
Description:
Raider. Capable of jumping up and down cliffs. Heals when out of combat.
Built From:
Barracks
Cost:

The Reaper is a Lightly Armored scouting units with excellent freedom of movement, with an out-of-combat Health-regeneration ability. This unit can now be produced from a Barracks and from a Reactor. It still remains a costly & fragile unit; avoiding enemy fire and use of Bunkers or escaping Melee via Cliff edges for protection is advised.

Only used for opening with an aggressive scout, to save having to use Scanner Sweep, and briefly to secure time for a Reactor and Command Center (2) to produce. If going for a rush, 3 Reapers minimum are needed to two-shot workers (4x2 damage x 3 Reapers) quickly,

Reapers are commonly used as a Hit & Run tactics against Workers and Melee units thanks to its ability to travel up and down cliffs, making it easy to abuse enemy unit's Melee range. With increased health and the Combat Drugs ability, Reapers can take a few hits for an early Marine poke, but mass production beyond the Reaper Opening is not advised as Reapers do not scale in any way into the mid or late game. Hellions or Marines and Medivacs are recommended instead as a transition (depends on match-up).