As in StarCraft: Brood War, Warcraft III and many other RTS games, StarCraft II retains the ability to save and view replays with a number of new and interesting features. The file sizes are still relatively small and average about 100kb for a 15 minute game. Replays are saved and stored in a special folder called "StarCraft II" in the user's Documents folder. If you disconnect from Battle.net while watching a replay you will be able to continue watching the replay until you exit the replay, where you will have to reconnect. 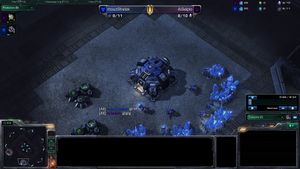 Player's names and colors in the middle of the screen. On the left side you see the "Production" statistic.

The StarCraft II Replay system has a number of improvements and new features compared to Brood War replays. These are listed below.

As you play through a replay, you can now jump back to any point in the replay that you have already seen and view it again. To go forward is not possible, but Faster x8 (Speed) will help.

You may also press B in order to quickly rewind 15 seconds.

You can see a human players selection. E. g. a selected Marine will show a dashed circle around it. If Red selects a unit the circle will be red. In general the circle is in the players colour and what commands are being issued.

You can view a players First-Person view at any time to see exactly what they were doing at any point in time. Each player gets a number. In a 1v1 between MC and MMA, 1 is assigned to MC and 2 is assigned to MMA for example. If you choose "Everything (E)", you can switch temporaliy into the vision of a specific player. By holding V when having a unit of one player selected, your vision will switch to that of the player until you release V.

You can lock the camera to any unit to follow it around the map. To do this select the unit and press Ctrl + F.

An overlay in the top left displays various information for every player as chosen by the viewer. These options are listed below.

None
Closes the box. No stats are displayed on the left side. Does not effect stats in the middle.
Resources
Shows Minerals, Gas and Supply of all players. A player sees exactly the same amount in the upper right corner. It's an important value, if you want to follow Day[9]'s rule "Keep your money low!".
Income
These values are calculated per minute. They show Minerals and Gas, which is harvested by a specific player. The amount of all harvesters is displayed, too. Note: There is a difference between active workers and harversters. E. g. player X has 70 haversters, but 20 are not mining. Active workers would be 50, not 70.
Spending
Displays where resources are being spent, either on Economy, Technology or Army.
Units
All units on the battlefield will be displayed. A killed unit will be deleted and won't be displayed. At the start of every game only 6 workers per base are displayed.
Units Lost
Displays number of lost units.
Production
Displays all research, construction and production taking place.
Active Forces
Displays Army units in terms of resource cost and total Supply stats. Changed name "Army Value" into "Active Forces" with patch 2.0.x.
APM
Displays average and current APM. Due to Game Speed issues, these are currently inaccurate.

Patch 1.3.0 introduced several new features and Patch 1.3.3 changed the Current APM hotkey. These are listed below: 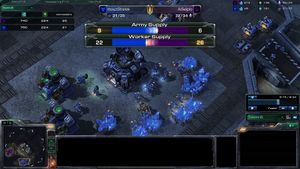 On the left side the income for every player is displayed. In the middle you see army and worker supply.