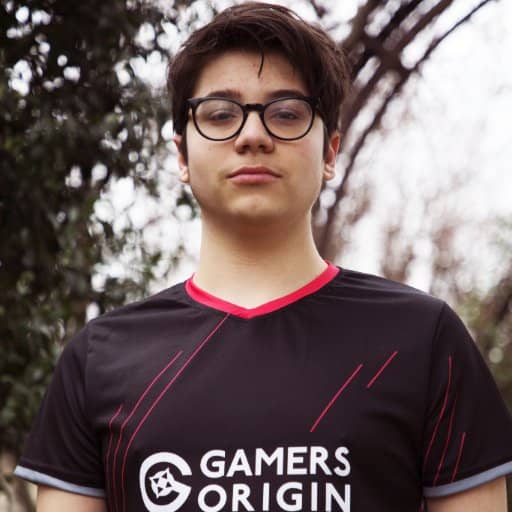 Riccardo "Reynor" Romiti is a Zerg player from Italy who is currently playing for Team QLASH.

Reynor started playing StarCraft II from a young age, following in the footsteps of his father who also played SC2. He started gaining a reputation at the age of 11, where he reached Master. With a rapid growth in skill, he was able to play at Italian LANs, including The Game Championship 2013 and 1st Next SC2 Tournament.

On November 12, 2013, mYinsanity announced that Reynor has joined the Team B roster.[1]

His first notable result was a second place finish at the Campionato Italiano Personal Gamer#2, losing 3:2 against Narcotic in the final. He was also invited to play at Vasacast Invitational 2014, but he fell out after losing to DeMusliM in the Ro32 with a 2:0 score.

Reynor made his first international appearance at the 2013 DreamHack Open: Bucharest. In the Group Stage, he would lose 0:2 against monchi and HwangSin, but was able to defeat Vicius with a 2:0 victory. He closed the tourney with a third place in his group.

Reynor appeared again at a DreamHack event, where he achieved a first-place finish in his group in Group Stage #1, beating sSak and Zeny with a 4-0 in total. However, he would lose to MC in Group Stage #2 and was knocked out from the tournament by sLivko with a 0-4 score.

Reynor won the Italian LAN B.i.G. Party 2015, and in the NationWars III qualifiers, he won 3 games in a row against the Ukrainian team before losing to Bly.

In October 2015, Reynor qualified to DreamHack ROCCAT LotV Championship through the Southern Europe qualifier. In the Group stage, he lost 2-0 to Solar and Elazer but defeated Lambo, Avokado and Semper, closing the tournament with a fourth place in his group.

In 2016, Reynor continued to dominate the Italian scene, winning the LANs Torino Comics 2016 in April, the Sc2 Model Expo Verona 2016 on the 22nd of May and Level Up Roma October.

In 2017 and early 2018, Reynor has yet not been able to play in WCS events because of his age but has found success in online cups and minor tournaments such as Go4SC2 ESL, WardiTV Invitational 2, WardiTV Christmas Invitational 2, Proxy Tempest EU Open, GG year 2017 and many more.

In March 2018, Reynor reached top 8 in WESG, defeating Puck, iAsonu and SpeCial but was eliminated by Dark. A few days after WESG, he confirmed his high level of play by all-killing Team France in the ro32 of StarCraft II: NationWars V. During the Group Stage, he single-handedly defeated Team China and Team Norway with two all-kills, allowing Team Italy to advance to the Playoffs where the team fell to South Korea's all-kill executed by INnoVation.

During a BaseTradeTV King of the Hill event on May 3, 2018 he did a flawless 10 wins streak winning against PtitDrogo, DnS, Optimus, Snute, Nerchio, TLO, souL, Stephano, Denver and Harstem, breaking the previous record set by Serral.[2]

Korea and first steps in WCS[edit]

During his first official trip to Korea to train, Reynor participated in the qualifier for the 2018 Global StarCraft II League Season 3. There, he was successful in qualifying on the second day of qualifiers, defeating TOP, Trust, and Kelazhur to secure a spot in Code S.

Upon qualifying, Reynor was placed in the first group of the Round of 32, alongside Classic, Ryung, and sOs. He was defeated by Classic 2-0 in the initial match after Classic displayed superior builds with Glaive-upgraded Adepts and Double-Stargate Phoenix play. With this, he was then pitted against Ryung in the losers' match. In that match, Reynor came out victorious 2-0 after two late game ZvTs where Reynor displayed strong map control and late game control with brood lords. In the final match, Reynor had to face Classic once more in order to secure a spot in the Round of 16. During this series, Reynor adapted to the style of play that Classic displayed in the initial series, reading potential builds, enabling to first show his trademark multitasking. After two close matches between the two players, Reynor was able to take down the then #2-ranked WCS Korea player Classic 2-0, knocking a tournament favorite out early and becoming one of the youngest players to ever move on to the GSL RO16.

Having only turned 16 days before his GSL group, the 2018 WCS Valencia a week later would be his first ever WCS Circuit tournament. Due to the age restrictions placed on the tournament he wasn't able to attend the Challenger series and had to go through the open brackets. He managed to go through his first two groups 4-1, only dropping maps to Nerchio and Denver respectively. In Group Stage #3 he then beat both HuT and Showtime 2-0 each, moving on to the bracket stage in his first ever WCS Circuit tournament. In the Round of 16 bracket he hit SpeCial who was generally considered to be the best Terran outside of Korea. In the first game on 16bit, SpeCial seemed to dominate much of the early game, consistently harassing and trading, even taking out many of Reynor's hatcheries, but ended up falling to his late game. The two games after, where almost entirely controlled by Reynor, who eventually won the series 3-0. His next opponent would be the large tournament favorite in Serral. Coming off two WCS win in a row in both Leipzig and Austin, he was favored by many people to win the entire tournament. Having just barely edged out his last series against Scarlett however, people were looking at Reynor as the greatest possibility to take him out of the equation. The series itself however ended up being rather onesided in Serral's favor ending 0-3, ending Reynor's run in the Round of 8.