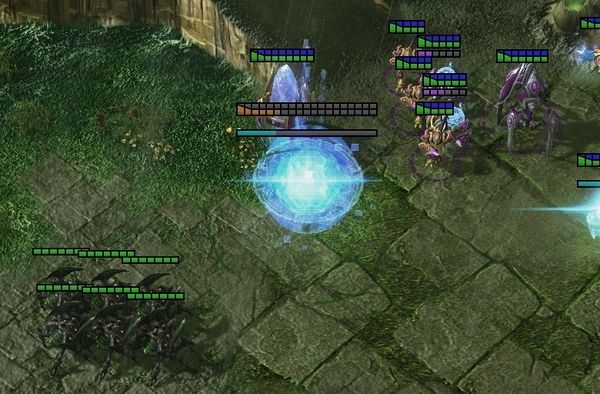 This is a timing attack designed specifically to hit at a time when the 3 Gate Sentry Expand build is weakest: just as the Nexus is finishing, or directly after.

Depending on when you stop making Drones, the build can be executed 3 different ways:

Any opening that expands and gives you 1 Gas will work. The build is commonly used when using a Speedling Expand opening.

The build starts when you have 2 Hatcheries and 2 Queens, and have just started Zergling Speed:

If you're trying to stop the Nexus from finishing, you want to stop at 21 Drones (see the IdrA replay referenced below).

If you're trying to all-in, you want to stop at around 27 or 28 and just make pure Speedlings after your initial Roaches.

If you're just trying to pressure his Sentries, and kill them or deplete their energy, you want to stop at 36, keep your Drones on gas, and expand as you attack.

This build is specifically designed to do well against 3 Gate Sentry Expand. However the earliest versions of this attack will also do well vs 4 Gate, so that is a bonus. Make sure your opponent is doing one of these builds before proceeding. If you are caught unprepared against a Stargate Opening or Dark Templar Rush, you will have no defenses and will most likely lose the game as soon as you start getting attacked.

In general, your Roaches should be shooting Sentries whenever possible. If they surround their army with Force Fields to protect against Zerglings, do not let your Zerglings continually run into the Force Fields and take damage, back them away and try to kill Probes or buildings.

Small or Medium-sized Maps with a wide-open natural are perfect for this build, since it will maximize the amount of Force Fields Protoss will need to cast in order to protect your opponent's base and his units. Some notable examples of this are:

Maps with small chokes into the Natural or a closed off Natural are not good, since Protoss can split your army using just a few Force Fields. Also large maps are generally not preferred since Roaches take so long to arrive. Some examples of bad maps are: