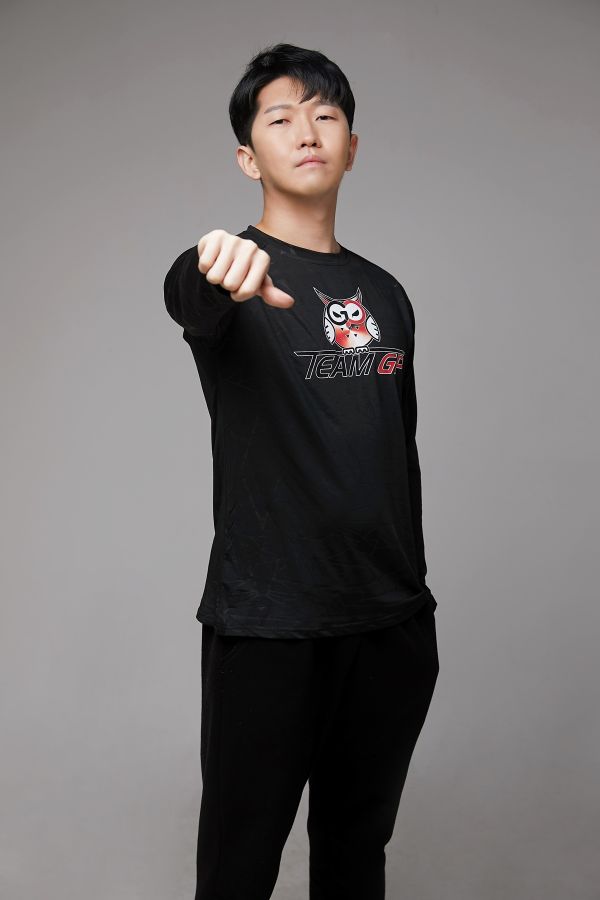 From the beginning of his career to October 2012 Ryung was a player for SlayerS, but following its disbanding in November 2012 Ryung signed with Axiom, following the footsteps of his fellow former-SlayerS player CranK.

Originally on Prime, Ryung first participated in the Gainward SC2 Tournament where he was able to make the Round of 32 out of 768 participants. After dispatching RainBOw and Kyrix, Ryung ended up with a quarterfinal finish where he was eliminated by NesTea. Ryung's debut for the GSL would be in the GSTLs where he was noted as a TvT specialist beating Code S Terrans TOP, SuperNova, and up-and-comer Bomber and narrowly losing to former GSL Champion Mvp. Ryung eventually became teamless in October 2012, as SlayerS disbanded.[1]

Ryung qualified for the Code A GSL May season, beating Revival, Creator and aLive before falling to Bomber in the semifinals with a score of 1-3. Making the Round of 8 allowed him to compete in the up/down matches where both MC and HongUn defeated him, leaving Ryung in Code A.

In the GSL July, Ryung once again competed in Code A, but was knocked out in the Round of 16 by the eventual runner up, Tassadar. However, since Rain decided to quit the GSL, there was an empty spot in the Up and Down Matches which Ryung managed to fill since he won the wildcard tournament among the other fallen Code A members. He later won his Up and Down Group and thus was promoted to Code S.

He was eliminated in 2011 GSL November Code S RO32 and was seeded into Code A RO32 against his teammate Brown. He got eliminated 0-2, ending his GSL run for this year.

Ryung returned to Code A for the 2012 GSL Season 1. In the Round of 48, he faced AnNyeong and won 2-1 to proceed to the next round where he faced Heart. He again won 2-1 and had to face SuperNova in RO24. He got back his last season Code S spot after winning 2-0.

Ryung's first appearance in Code S was in 2011 Global StarCraft II League August where he made it relatively deep, winning his group stage and beating Puzzle before falling to July in the round of 8. In the next season, Ryung would once again make it out of the group stages after beating MarineKing and Bomber only to fall to Clide in the next round.

Ryung also made a strong showing in the next season of Code S in 2011 Global StarCraft II League October . In the round of 32, Ryung was placed in a group with Bomber, MarineKing and Puzzle. Ryung was able to defeat both Bomber and MarineKing to make it through to the next round in first place with a 2-0 score. Ryung's opponent in the round of 16 was Clide. Ryung was defeated by Clide 1-2.

In the next season of Code S, 2011 Global StarCraft II League November, Ryung's round of 32 group consisted of YugiOh, MC and MMA. Ryung was able to defeat YugiOh, but was defeated twice by MC, causing Ryung to have to play in Code A. In Code A Ryung was defeated by Brown, causing Ryung to have to play in Up & Downs next season. There, he would place third in his group, almost making the cutoff for Code S.

By making it to the final round of the 2012 Global StarCraft II League Season 1 Code A, Ryung qualified for the 2012 Global StarCraft II League Season 2 Code S. In the round of 32 Ryung was placed in a difficult group of Mvp, NaNiwa, and Puzzle. Ryung was able to defeat Mvp 2-0 to make it to the winners match against NaNiwa, who he lost to by a score of 0-2. Ryung then had to play a rematch against Mvp. Unfortunately, Ryung was defeated by Mvp by a score of 0-2, and fell down to Code A.

On February 1, 2012, Ryung participated in the ESV TV Korean Weekly Season 2 Weekly 2. After taking down Sting, Shine, and RagnaroK, Ryung went on to face aLive. He was not able to advance any further after he lost to aLive by a score of 2-3 and ended up taking third place.

From September 3 to September 4, 2011, Ryung participated in the IPL Season 3 Qualifier 2 Ryung started off from the Round of 64. Ryung defeated Bischu, KiWiKaKi, Campanella, Zenio, and Check, in order to advance in to the finals to face aLive. In the finals, Ryung defeated aLive by a score of 1-0 and was able to grab first place.

On November 20, 2011, Ryung participated in the IPL 4 United Kingdom Qualifiers. Ryung started off from the round of 32 and defeated KarMa, Gomas, DeMusliM, and then advanced in order to face SaSe. He fell to SaSe by a score of 0-2 and fell in to the losers' bracket. In the losers' bracket, Ryung was able to grab one more victory against BlinG before losing to TAiLS by a score of 0-2 and ended up in fourth place.

On November 12, 2011, Ryung was invited to participate in the IPL Fight Club. His first opponent was Sheth. He was knocked out in his very first match up by a score of 2-5, and was not able to dethrone Sheth.

Ryung and Min are rivals, they played Brood War together, became semi-progamers on the same day, joined the Prime clan together, then joined SlayerS together.