SC is also a popular acronym for StarCraft. 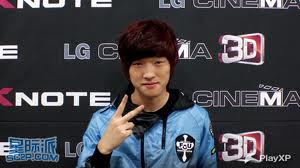 He is also known for being one of the youngest players to have found success in the GSL, debuting at the age of 15.

On October 2012, sC retired from professional StarCraft II and switched to playing League of Legends.[1] On March 13, 2013, it was announced by coach Choya that sC would make a return to Starcraft 2 and that he would play for team FXOpen.[2] After a short comeback sC decided to retire again.[3] On July 8, 2014, sC came back from the retirment for the third time, playing for Micro GamerZ[4] just to retire one month later when it was announced that he was now playing Heroes of the Storm.[5]

sC is a fairly well-rounded player that has begun to be known for his choice of very aggressive opening timings, especially against Zerg players. sC favors constructing specific builds for his opponents to take early game advantages before transitioning into more standard macro play. sC commonly uses a two barracks opening, and he is well known for developing his own style of mid to late-game play, characterized by aggressive attacks with a constant stream of reinforcements rallied to his opponent's base.

sC Qualified for GSL Open Season 3, where he advanced to the round of 32 by beating Lyn, but was knocked out in the following round by eventual quarterfinalist FruitDealer. This performance qualified him for to play in a tie-breaking tournament to determine which players would be able to play in the first season of Code A. sC prevailed in his group and went on to play in Code A in the next season.

In his first appearance in Code A, sC made his way past JSL, GgoBooGie, and Cezanne before finally losing to eventual Code A Champion TOP in the semifinals. sC then defeated FruitDealer in a rematch from the previous season, earning himself a seed in the next Code S tournament.[6]

In GSL 5, sC scored 2-1 in the group stage with wins against MarineKing and InCa and a loss to Kyrix, thus qualifying himself for the 16 player elimination tournament. After beating TricKsteR, sC lost to San in the quarterfinals, the best performance from any of the players who had competed in the previous season's Code A.

sC showed his best career performance in GSL May. sC won a rematch against Code A Champion TOP and defeated ByuN, RainBOw, Polt, and another Code A Champion, LosirA, while only dropping a single map in the entire process. In the semifinals,[7] sC played some of the best games of his career in a series against NesTea.[8] Several factors, including the fact that Zergs were considered very weak in the way the game is played of the time, sC's defeat of NesTea's teammate LosirA, and NesTea's improbable victory over anypro in the previous round led to a huge amount of hype leading into the match. The games themselves were exciting, featuring sC's characteristic two barracks play with several close games in a back and forth series which saw NesTea prevailing in a drawn-out final game. The excitement of the series led to some [9] to call it the best series to have ever been played in the GSL.

Soon afterwards, sC qualified for the LG Cinema 3D Special League, a special tournament played using 3D equipment provided by the LG company, via Seoul Day 2. He made it into the finals after defeating Gaebyul, Rain and Sage. sC met DongRaeGu, who was (at the time) a relatively unknown player with a strong track record for beating Terrans on the Korean ladder, in the finals. The tournament finals were broadcast on GOMTV as a pre-match event for the GSL Super Tournament that was concluding on the same day.[10] sC lost 2-3 to take second place, earning ₩6,000,000.[11]

After this point, sC's performance slumped somewhat. In the GSL Super Tournament sC only advancing to the round of 32, where he lost to Maka. In GSL July, sC lost to Mvp and ByuN. He then played in the Up & Down Matches, where he subsequently fell into Code A.

During GSL 8, sC managed to stay in the GSL by beating TREME, but failed to reach the Up & Down Matches when he lost to TaeJa.

Later, sC's coach Choya revealed via tweet on August 23 that sC had a been suffering from a collapsed lung caused by Pneumothorax, which required surgery.[12] During his time off, sC parted ways with his team FXOpen e-Sports and joined a new team, MvP.[13] After about a month away from competitive play (August 11 to September 19), sC was ready to tackle the GSL again.

GSL November saw sC return to form, beating NesTea with a 2-port Banshee cheese, and LosirA in the round of 32, advancing him to the next stage of group play. In the round of 16, sC beat two time GSL Champion, MC twice, only losing to Puzzle, and took second place in his group. sC was seeded to play Mvp in the round of 8 in a match where Mvp played his iconic mechanical style and sC stuck with a bio style. Despite three close matches, Mvp's play was superior, and sC was knocked out of the tournament. However, his quarterfinals appearance earned him an automatic seeding into the next season of Code S.[14]

Shortly following his round of 16 victory in the GSL, sC traveled to his first event in the USA, MLG Providence. sC played well in the winners' bracket,[15] defeating HasHe, MarineKing, and dde before being knocked to the losers' bracket by LosirA. sC did not fare as well there, as he lost to MarineKing in an extended best of seven series that included several early Banshee build from both players. sC lost the critical seventh game after attempting a proxy two barracks cheese that failed once MarineKing was able to prevent him from building a bunker.[16][17]

Despite undergoing surgery in September and returning to the GSL, sC suffered a relapse of his pneumothorax condition in late November.[18][19] As Pneumothorax is a difficult disease to treat,[20] it is not certain when sC will return to professional StarCraft play. sC has continued to suffer from pneumothorax relapses, the most recent one on December 16, 2011 on his left lung.[21]

However, sC was sighted playing in the IPL Team Arena Challenge 1 broadcasted on December 13, 2011.

On June 29, 2012, sC participated in the EWM Season 3 Week 4. sC received a BYE in round one and then went on to take down Acou, Anna, Tear, and Avenge to advance in to the finals against finale. He had to settle for second place after he lost to finale by a score of 1-2.

On July 23, 2012, sC participated in the 2012 South Korea WCS Preliminaries. sC received a BYE in round one and then took down 김동균, CrazymoviNG, TREME, and faced Dear in the finals. After taking down Dear by a score of 2:0, sC advanced in to the World Championship Series: South Korea Nationals.