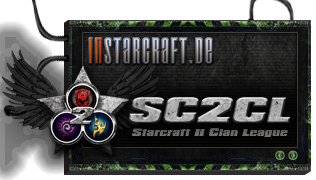 SC2CL's 2nd season was announced on March 1st 2011[1]. The new season featured a new Master Division with a €1200 prize pool as well as a new format for Clan Wars.

Season 2's format for each Clan War is four 1v1 Bo3 matches and one 2v2 Bo3 match. Each match won awards the team with a point that gets counted in a final standings.

The Master Division is the top division of the SC2CL. Tweleve teams participate in it, four qualified from Season 1, four were invited and four qualified.

€1200 are spread among the teams as seen below: