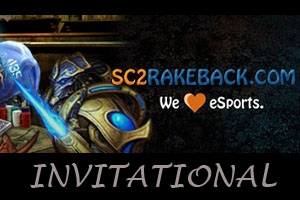 z33k and SC2RakeBack.com now have European tournament series. SC2RakeBack is a strong supporter of the eSports and Starcraft 2 Community, helping push eSports forward through event sponsorships like this one. They offer rakeback for serious players and free bankrolls for beginners. You can also refer your friends to SC2RakeBack.com and make a few bucks yourself! All revenue generated is invested back into the community in the form of stream sponsorships and events. Feel free to check out their website.

SC2Rakeback Invitational #1 takes place Sunday 1 May 2011. There are be 8 qualifiers in April - every Tuesday and Saturday, followed by the €100 32-man invitational on May 1 - there are played as an 3U cup SC2Rakeback Qualifiers. Each of 8 Qualifier cups have prize pool of €10 and 2 invitations. 16 players will qualify through these cups, 16 will be invited by z33k.

For the matches the first map is given by organizer:

After that initial game, the loser must pick a map from map pool. Each map can be played on only once.