SCV (Legacy of the Void) 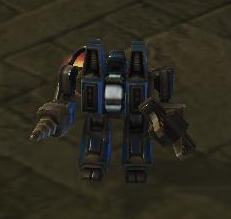 The SCV (Space Construction Vehicle) is the Terran worker unit. It harvests resources, constructs buildings and can repair all Terran mechanical units and buildings. As a building is constructed, the SCV must remain at the site until complete. If the building SCV is killed, the building's construction will halt. Building SCVs can be given queued assignments such as mining minerals and even constructing more buildings. If an SCV builds a Refinery it will automatically start mining gas unless it has been given another command in the queue.

Terran SCVs have 5 more health than the other workers and they can repair other buildings and mechanical units. Since SCVs are both mechanical and biological units, they can be repaired by other SCVs as well as healed by medivacs and medics. Moreover, their Repair ability can be set to autocast. With autocast active, an idle or patrolling SCV will automatically repair any damaged structure or mechanical unit within a close proximity. An SCV that is mining, building, moving, or attacking will not start to repair, even if repair autocast for that unit is toggled.

SCVs are generally used simply for resource gathering and building. However, SCVs can be used to support pushes by repairing units such as the Siege Tank or a Thor. They are also used for building offensive Bunkers or Turrets when needed. Various all-in attacks use SCVs as a meat shield, allowing the frailer units like Marines to deal more damage before getting killed by the opponent's defense.

SCVs can repair Terran buildings or mechanical units (including other SCVs) under attack which is a key part of defending early game pushes. Early pressure may require SCVs to repair buildings, such as those in a wall, as well as keeping key structures, such as the Command Center, from being destroyed. In tight situations, they make a slightly better ramp blocker than Marines and can be used as a last resort to keep melee units such as Zealots or Zerglings from getting a surround.

Due to the nature of Protoss shields, early game Probe harassment leads to a need for good SCV control in the early game. While building, the SCV is vulnerable to the Probe's attack and cannot respond to the Probe attack, direct control to dodge the probe is also limited. Losing an SCV to a probe early on is a rather large disadvantage and can mess up the timing of many builds. Having good control of SCVs is necessary to hold off the Probe until structures are built to prevent any SCV losses. Many of these Probe issues can be prevented by building early buildings close to the mineral line.

Also, an Engineer Bay could be built in Protoss's natural in order to postpone the Nexus. It is usually nearly finished to maximise the postponement while saving minerals.

The Zerg drone is capable of sniping SCVs, but due to the rarity of Drone scouts in TvZ, this is seldom an issue.

Offensively, through the use of Bunkers, the SCV is capable of both harass and containment. SCVs are capable of placing a Bunker where the typical Zerg Fast Expansion would be to prevent the expansion from taking place. This then forces the Zerg to stay on one base and create attacking units to deal with the bunker placement. Because of the ability to Salvage, Bunkers can be placed and Salvaged when their health is low to recoup 75% of the investment made, meaning only 25 minerals has been lost from the harassment. The Terran also has the choice of allowing the expansion to be made and exploiting the Zerg's economic commitment by building a Bunker close to the expansion to bunker rush their opponent. The ability to repair allows SCVs to keep the bunker healthy against attacking forces, meaning Zerg will have to both deal with the SCV and the Bunker while being attacked by the units within.

SCVs play an important role in TvT in the form of repairing Bunkers to hold early harassment and repairing mechanical units such as Siege Tanks and Thors in the mid-late game. They also are used in a number of allins such as the 3 Rax All In or 1/1/1 allin and cheese such as the Worker Rush.