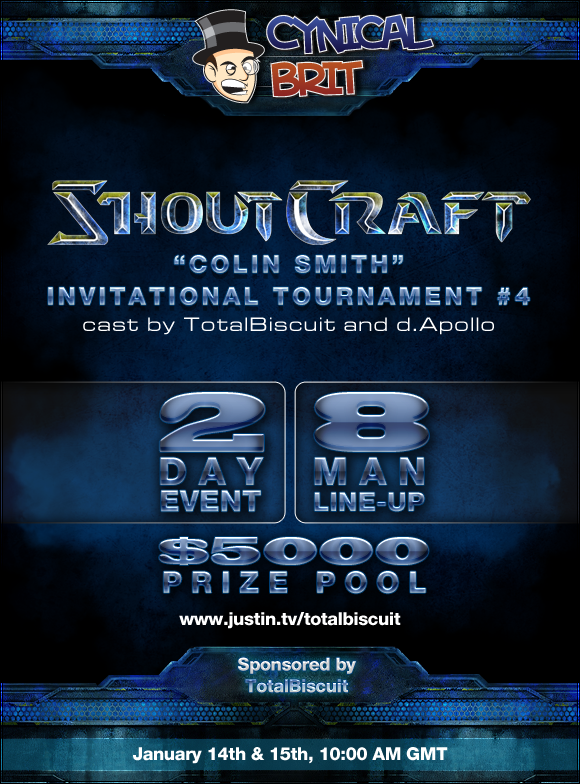 The SHOUTcraft Invitational 4 - "Colin Smith" is the 4th event in The SHOUTcraft Invitational tournament series. The money for the Prize Pool was made from advertisements on TotalBiscuit's StarCraft II Ladder Streams and donations sent in by viewers during the previous event. This tournament featured an original "Tip Jar" system that allowed viewers to donate money directly to the players participating in the tournament, on top of being able to donate money directly towards the Prize Pool of the next event.

It is named after Colin Smith, a viewer who donated a significant sum of money both at SCI2 and SCI3.

All games are commentated by TotalBiscuit and Apollo, in English, in TotalBiscuit's stream, and by ZeratoR, in French, in GameCreds' French stream.[1]

The Ro8 consists of 2 groups of 4 players. Each player plays a Bo3 against every other player in the group. The top 2 players proceed forward and the bottom 2 players are eliminated. The remaining 4 players are seeded into the Ro4 depending on their performance. Seed 1 from group A then plays Seed 2 from group B. Seed 1 from group B plays Seed 2 from group A. These matches are Bo5. The tournament proceeds as normal from that point with the winners advancing to the Grand Final for a Bo7 match-up and the losers entering the bronze match to compete for a 3rd place prize.

Players who have no chance of advancing from the group stage (which will occur if they lose have lost their first 2 Bo3s) qualify for a $50 comeback bounty, if they are able to win their final Bo3. This is to help prevent "meaningless" matches in the tournament.

The direct Prize Pool from the organizers is $5000, in addition viewers can donate money directly to the players in the form of tips.

As the winner of the previous SHOUTcraft invitational, Socke was reinvited and will be joined by 7 other invites.