SHOUTcraft America is a 16-player invitational organized by Genna Bain to determine the best American player. 16 players who are permanent residents of continental America, which includes Canada, North America and all Central and South American countries are invited based on their American Grandmaster Ladder ranking at the end of the 2013 Season 2 on May 1st, 2013. The event is dual-cast by TotalBiscuit alongside a different co-caster each day in the following order: Husky, Day(9), RotterdaM, Frodan, IdrA and Day(9) again, with the offline finals dual-cast by TotalBiscuit and Axslav in the MLG Studios.[1] 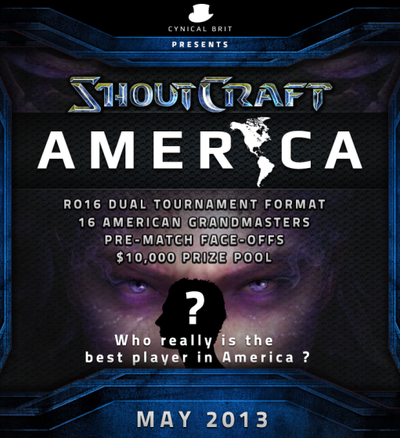 * As was established during the third SHOUTcraft Invitational, the tournament incorporates a tip jar system through which spectators can support players directly by awarding them with money via PayPal.[2]

* Groups were decided in the group selection event