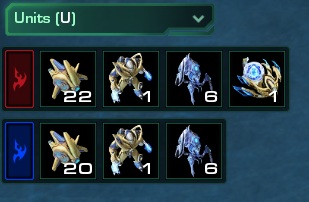 This is an opening that is safe vs. 4 gate and lets you safely choose your tech route. It gets a high Stalker count, which lends itself well to a Blink transition, but Robotics Facility and Stargate transitions are also viable. If your opponent is 4 Gating then you will have the same unit count as them during the first push up the ramp, which means that defending the rush will come down to micro. However, as you have a positional advantage (you are at the top of a ramp), you should be able to win this fight.

When scouting, look for high energy on Nexus compared to your Nexus. If it looks like the opponent only spent two Chronoboosts on their Nexus, then it is likely that a 4 Gate is coming. This can also be indicated by a late second Gas.

If Your Opponent Is 4 Gating[edit]

The game is practically won. If you use your first warp-in to get 3 Stalkers at your ramp then you should have more units than they do (6 Stalkers + 1 Zealot + 1 Sentry) and about the same amount of cool down left on your Gateways. Keep in mind that your Sentry has enough energy for 2 Forcefields at this stage of the game.

If you manages to deny their attempt to place their proxy Pylons at the bottom of your ramp then use Forcefields to cut the opponent's army in half as they try to get up your ramp. It is better to do this than to block them out completely because, with good micro, you should be able to take any fight against the first couple of warp-ins since you have more units. Keep in mind that the 4 Gate runs out of resources after 4 warp-ins; this means that if you can kill one unit every time you place a Forcefield then you will have more than enough units with 3 Gateways. In practice, however, you will be aiming to kill a lot more with each Forcefield placed.

If they are doing an "in your face" 4 Gate with their first Pylons at the bottom of your ramp (you weren't able to deny a Pylon being placed) then do not panic. Forcefield out all their units and kill the Pylons with their Stalkers. If you can deny the Pylons from getting a warp-in on the high-ground then you effectively end their rush.

If you get your second gas stolen, work on destroying the Assimilator with a Zealot and a Stalker and take it as soon as you can. You will want to not build a Sentry (so as to not fall behind in gas) and get a Stalker instead. Then continue as normal. You can warp in a Sentry instead of a Stalker at your first warp-in if you need one to defend against a 4 Gate, but it is highly unlikely that they are going to 4 Gate you after a gas steal. This is as a gas steal usually indicates that the opponent wants to slow down your tech, which in turn indicates that they want to move into the mid-game themselves.

All maps except those without a ramp leading into the main base. This excludes maps such as Tal'Darim Altar and Bel'Shir Beach