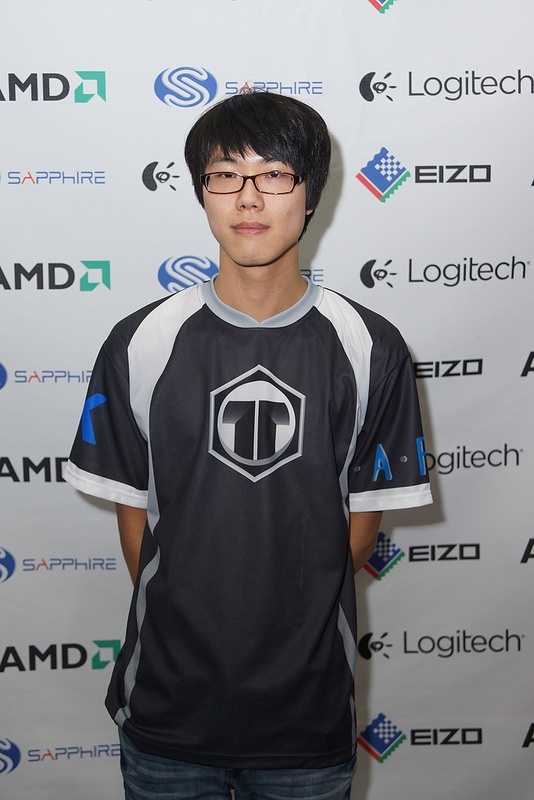 Extremely intelligent Protoss who shows extensive knowledge of the game using many innovative builds and intelligent placement of units and excellent micro and macro. His style is very intel-based and tends to focus more on scouting and reacting accordingly .

He has shown a build that is extremely StarCraft I esque. In this build, Protoss takes complete control of the air through mass Phoenixes and with good micro continually harasses Zerg's drone line while having Charge Zealots warp in to harass and possibly destroy expansions. While this is happening he is teching up to High Templar for Psionic Storm and Robotics Facility for Observers to shut down Creep Tumors and Immortals to counter Roaches, and later to Colossi to counter the high Hydralisk count made to counter the Phoenixes. Note that exactly like in StarCraft I he only pumped Zealots with Charge and had no Stalkers until about 10 minutes in the game. He also built no Sentries the entire game.[1][2]

Sage made his first appearance in the GSL Open Season 2 under the id 'FreeDSL'. He fell 0-2 to SuHoSin in the first round.[3]

Sage qualified for the LG Cinema 3D Special League via the World IT Show. He beat MMA in the first round, Check in the next, and made it to the Semifinals where he was stopped by sC.

Sage generated excitement in the GSTL Season 1, where he performed an all-kill of team fOu in the second week, demonstrating clever and innovative strategies throughout the series.

August 9, 2012, Sage joined Alt-Tab.Gaming,[4] but was teamless after they disbanded November 15.

Sage made his debut in Code A in GSL October, defeating notable players such as SocceR and AcE in the preliminaries. He managed to go through YoDa, Check and Lucky before falling to Oz in the round of 4. He played in the Up and Down Matches where he placed third with a score of 2-2, therefore staying in Code A.

In the 2011 GSL November Sage faced ForGG in the Ro48. There he was defeated 0-2 and knocked out of the tournament.

On June 22, 2011, Sage participated in the ESV TV Korean Weekly Season 1 Weekly 2. After taking down aLive, BanBans, and Jjun, Sage went on to face PuMa. He was not able to advance any further after he lost to PuMa by a score of 0-3 and fell in to the 3rd/4th place match. He was able to defeat San and took third place.

From July 19 to July 21, 2011, Sage participated in the ESV TV Korean Weekly Season 1 Finals 1. To start off the tournament Sage was placed in Group B. After advancing through his group with a score of 2-0, Sage advanced in to the playoffs. In the playoffs, Sage took down NaYa and went on to face YongHwa. He wasn't able to advance any further and fell to the 3rd/4th place match after losing to YongHwa by a score of 0-3. Sage once again wasn't able to grab any more victories and had to settle for fourth place after losing to Curious by a score of 2-4.

On June 28, 2012, Sage participated in the ESV TV Korean Weekly Season 3 Weekly 7. After taking down TOP, Sparta, Tassadar, and Sia, Sage advanced in to the finals to face TaeJa. He wasn't able to grab first place after losing to TaeJa by a score of 1-3 and took second place.

On August 20, 2012, Sage arrived in Poland to train in the Ministry of Win with the aim of attending major European tournaments.[6] He's been streaming his ladder since then and has participated in many online daily and weekly events with great success. Up to 1,500 people simultaneously watched his stream on his third day in Warsaw, Poland.

From August 30 to September 2, he played his first live event in Europe, the Battle at Ministry of Win. He finished 2nd, only losing 3-1 to Nerchio in the finals. On November 15, 2012, he became teamless as Alt-Tab.Gaming disbanded.[7]

With Alt-Tab disbanding, Sage returned to Korea on November 17.[8]

After being teamless for some time, Sage became a member of Root Gaming on February 1, 2013. He said in an interview upon joining the team that he hoped to focus on foreign tournaments.[9]

On May 4, 2013 Sage participated in the WCS AM Challenger League Qualifiers. After losing his first match in the winners bracket to puCK he went on to defeat badcop, Center, trimaster, and HyuN to qualify. In the Main Tournament he lost 2-1 to Vibe in Bracket 5 of the Bracket Stage. He then beat Sen and Oz 2-0 in the group stage to qualify for the WCS AM Season 2 Premier League

From June 28 through June 30 of 2013 Sage participated in the 2013 MLG Spring Championship. Placed in bracket 2 of the Winners Bracket he beat Padre, binski, KawaiiRice, and SaSe without dropping a single map, advancing directly to the Final Bracket. After losing 2-1 to HerO in the winners bracket, he managed to defeat soO 2-1 in the losers bracket, but was then knocked out 2-0 by Sound. He achieved a final placement of 7-8th place.

Opening with a Forge expand, Sage proceeds to into a 2 base, 4 Gateway, proxy Robotics Facility +1 weapon Dark Templar drop.

Lucky's army is drawn away from his main temporarily due to misdirection of 4 Zealots at the front, which provides supply and time for 4 Dark Templars to be dropped and 4 Dark Templars to be warped in via the Warp Prism. Having scouted the Dark Templar tech prior to this drop, Lucky already had the Spore Crawler in the mineral line, which was quickly erased along with his Lair and Roach Warren thanks to the +1 weapon upgrade that finishes exactly at the time of the drop. Sage keeps on the harassment using the Warp Prism to relocate Dark Templars to Lucky's third while transitioning into 6 gateways with a Stargate producing Voidrays for Overlord harassment and taking his own third.

Shortly after losing his Lair, Lucky amasses a 'doom drop' of 34 Roaches, 3 Queens, and an Overseer into Sage's main. Down 42 supply at the start of the battle, Sage manages to defend the drop with well placed Force Fields and unit composition.

While bolstering his economy Sage continues to use the Warp Prism for harassment, however this time dropping Archons with +2 weapons multiple times on Lucky's mineral line and pairing up a Voidray with an Observer to take out Creep Tumors in the center of the map.

In an act of desperation Lucky attempts a second doom drop of 44 Roaches and 1 Overseer, but this time Sage is fully prepared with units in the corner of his base accompanied with 4 Probes which he uses to create numerous Pylons as to restrict the area that Lucky can drop in. The Pylon blocking along with Force Fields and +2 Stalkers prove to be very effective against the mass of non-upgraded Roaches. After a second thwarted drop and no answer to the constant Archon harass on his mineral line, Lucky types out 'gg'.

The particular strategy used by Sage in this game is admittedly inspired by White-Ra, but optimized in his own way because of actually never having seen him use it in person.[11]