Scouting is the act of revealing (either with a unit's line-of-sight or Scanner Sweep) remote areas of the map to gain information about the opposing player(s).

Scouting is a fundamental part of SC2. Almost any Build Order requires some sort of Scouting in the first 3 to 8 minutes. If your Opening is vulnerable to Cheese you should scout. Most Build Order offer help, when to scout and what to scout for.

Thus, what is of supreme importance in war is to attack the enemy's strategy.
Sun Tzu, The Art of War () 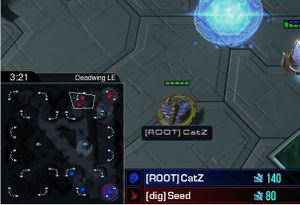 In higher leagues to scout with a worker (see Early Game Scouting) is a controversial debate among many players. E.g. Welmu did not scout duckdeok in two games (Belshir & Newkirk), playing against each other at 2013 WCS Season 2 Europe for 6 minutes. He scouted for Proxy-Buildings, though.

Regarding #2: Some Openings require a worker to scout the Main or the Natural.

Note: In lower leagues a worker scout is recommended, if you die to Cheese often. Scouting a Pylon at your Natural early in the game, might indicate a Cannon Rush. Scouting allows you to take the necessary steps to defend Cheese like that. If a Protoss plays some kind of Gate-FE (like YufFE), a Cannon Rush is very unlikely.

Scouting in the beginning of the game consists of sending out a Drone, Probe, or SCV to find your opponent's location, as well as to learn their opening build order and game plan. When scouting your opponent, you should consider the following:

Zerg players usually send their initial Overlords to find their opponent's base, making sure to position them close to a cliff or edge if there is a possibility of ground-to-air units. Drones can also be used to build an Extractor in the opponent's base, canceling it before it finishes building, continue scouting and repeat. Canceling a building results in a 25% loss of the cost. The prolonging of denying a geyser by canceling and rebuilding even up to 4 times would only result in a loss of 25 minerals and can be very worth it.

As the game progresses, higher-tech scouting units come into play.

This is a translation of a German video created by "creativelearningtv"[1]. Definition:

Active Scouting
If a player uses Micro to scout an opponent, he uses "Active Scouting". E.g. jumping with a Reaper into the enemys base.
Inactive Scouting
All things which helps to improve awareness of the Minimap. E.g. taking all Xel'Naga Towers on the map.

Active Scouting helps to scout buildings and unit compositions. It helps to react to your opponent and plan the next few minutes of the game. It sometimes exploits weaknesses, too (Artosis Pylon).

If a unit is attacked (Zergling at ramp) a player usually gets an acoustic and visual signal. Really good players constantly take a look at the Minimap.

Look in the Strategy section of Liquipedia for each of the three races (Terran Strategy, Protoss Strategy, Zerg Strategy) and read all of the major builds the enemy is likely to perform against you. Try not only to understand the basic build order but also the unit composition and the idea behind the build itself. In most builds, you will want to scout your opponent at around 10 to 15 consumed supply - it's during this time the enemy should have made his first tech choice. Determine beforehand what the enemy should have at this point for each build. Doing so will help you understand weaknesses and possible alterations to standard build orders.

If you are in a higher league, you can use Replay Websites and check out the replays or google for your favorite player (Replays). Download 5 to 10 replays which contain your main race (3 from each of your possible match-ups is best). Notice the build orders each player uses. Watch how the professionals execute their build order and timings against the opponent. Actively participate in watching the replay. At every decision that the professional makes ask "Why would he do that?" In every attack, noticing the flaw each player makes is twice as important as noticing the player's success. You do learn something from success, but you will always learn much more by failure.

Why is this not advised for lower leagues? Player in lower leagues may not understand anything what a professional player does. And they have many problems, like

and things like that. Scouting often leads to failure regarding Macro and Mechanics.