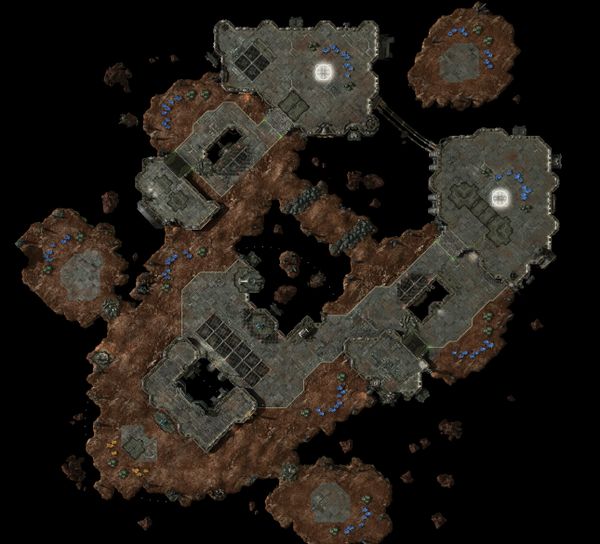 Scrap Station is one of the maps released with the StarCraft II beta. Previously it served as the battleground of the third Blizzard Battlereport between David Kim (P) and Yean-Ho Lee (Z) (then still named: Scrapyard). The map was removed from the Blizzard ladder at the end of Season Two.

The layout resembles the Brood War map Paranoid Android. One of its main features is how as you expand as the game phases: you are moving closer and closer to your opponent.

Guard your half of the station from enemy attack. Rocks protect the main path to the enemy, more distant paths are open. The enemy is close by air.

In beta patch 9, there were made some changes to Scrapyard to make the natural expansion easier to defend.

There are essentially two ways to wall-off on scrap station. One is to have a pylon further back and to build 3 3x3 buildings at the ramp to give a sturdier wall. The drawback of this is that you have to reveal an additional structure. Otherwise, you can use a pylon in the wall-off. This makes it slightly faster, and reveals less tech, but can be more vulnerable.

Patch 1.3.3 reduced the pylon power radius by 1, so make sure your wall-ins still work.