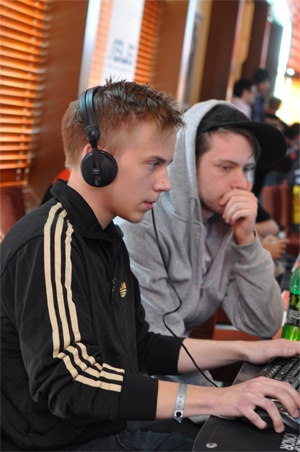 Seiplo is a former Warcraft III and Counter Strike professional gamer. He started playing StarCraft II around the time of the beta after switching from Warcraft III. Initially he hated the game because the game lacked the heroes that Warcraft III had. Seiplo had no plans to become a professional gamer in StarCraft but in his own words "fell" into the professional scene after playing the game and realising that he was talented. He is still in high school and his direction is Computing after he graduates high school he wants to take a gap year before trying to enter university.[1]

Seiplo started to gain recognition in early 2011 after placing well in several online cups. In the spring he attended Copenhagen Games where he reached Ro16 before getting knocked out by MC. MC would go on to win the tournament. He attended the BYOC qualifier at DreamHack Summer but was unable to qualify for the main tournament. His second on stage appearance in a big international offline tournament was ASUS ROG Summer 2011 at Assembly. He made it out of his group and caused a minor upset beating Kas in the round of 16. He would however lose to Stephano in the round of 8.

Seiplo attended DreamHack Winter 2011, and made quite an upset there as well. He made it to the second group stage after beating TLO 2:0, finishing second in his group. The next day he surprised the spectators even more, while barely losing to DeathAngel in his worst match-up he managed to win his group after beating Genius and SarenS. The next day he crushed the DreamHack Summer 2011 champion HuK 2:0, only to be knocked out by eventual winner HerO in the quarterfinals.

On February 16, 2012, Seiplo participated in the ZOTAC Cup Monthly Final January 2012. He was able to take down NoXOuT, Krr, Forsen and easily swayed his way into the finals to face fraer. This is where Seiplo faced a huge wall as he was taken down with a score of 0-3 and took 2nd place.

On April 23, 2012, Seiplo participated in the ZOTAC Cup Monthly Final March 2012. He was able to take down Revival, Sleep, Crane, and went straight into the finals to face fraer. He was not able to take down fraer and took 2nd place with a score of 0-3.

In 2012 he attended Copenhagen Games Spring 2012 where he placed third beating Happy 4:2 in the third place match. At 2012 DreamHack Open/Stockholm he reached the Playoffs beating Players like Naugrim, Turuk or Roll before losing 1:2 to Monster in the Round Of 16.

On July 28, 2012, Seiplo participated in the World Championship Series 2012 Sweden. Seiplo defeated LaLush, Forsen, and SaSe, in order to advance in to the sixth round to face ThorZaIN. He fell to the losers' bracket after losing to ThorZaIN by a score of 1-2. In the losers' bracket, Seiplo was once again unable to grab anymore victories after he lost SortOf by a score of 0-2 and ended up taking third place.