Sentry (Legacy of the Void)

This article covers the current multiplayer version of this unit. For other versions see Sentry (Heart of the Swarm), Sentry (Wings of Liberty) and Sentry (Legacy of the Void Campaign). 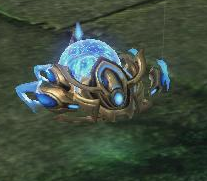 The Sentry is an unusual Protoss spell-casting unit produced from the Gateway after the Cybernetics Core has been built. The Sentry's spells are very powerful: Force Field, Guardian Shield, and Hallucination. These spells — Force Field in particular - are considered essential capabilities in almost all Protoss strategies.

In addition to their spells, Sentries have a primary attack that is capable of hitting both air and ground targets, although their damage output is rather weak; consequently, as with most spell-casters, it is usually considered a support unit and not a primary damage-dealer. The Sentry's spells are extremely useful throughout the game, despite its early position on the tech tree, making this unit an excellent complement to almost any army composition.

The Force Field spell instantly blocks an area on the ground, preventing movement for all non-massive ground units for 11 seconds. This ability can be used for tactical maneuvers such as blocking ramps, trapping enemy units, narrowing chokes or separating armies into multiple parts. Force fields can be destroyed by walking over them with a massive unit. Sentries spawn with the exact amount of energy necessary for this spell (50 energy), so it may be cast immediately upon warp in. This feature is invaluable when used in conjunction with Warp Gates, as any ramp on the map near a Pylon may be blocked off within seconds. For example, a critical mass of six sentries regenerate energy quickly enough to keep a sufficiently small ramp or choke continually blocked with Force Fields.

The Guardian Shield reduces incoming ranged attack damage by 2 per hit for all friendly units inside a large radius (4.5) around the Sentry for 11 seconds. The shield appears as a large spherical barrier around the Protoss army, capable of protecting both ground and air units. This means a single sentry is capable of massively decreasing an opponent's DPS in large battles, making it a high priority target for opposing armies. The Guardian Shield spell increases the effectiveness of Protoss units against Mutalisks. This is because each bounce of the Mutalisk's attack has its damage reduced by 2, i.e. so with Guardian shield the first hit does 7 damage, the second hit does 1 damage and the third hit also does 1 damage instead of the 9-3-1 pattern you would usually see. By the same principle, they are effective against any low damage, high rate of attack type units (such as Marines). Overlapping Guardian Shields do not stack in effect.[1] This spell costs 75 energy to cast, meaning that energy must be saved after the Sentry first warps in. Also, Guardian Shield does not reduce damage from the Oracle's Pulsar Beam.

The Hallucination spell creates a fake replica of a Protoss unit that appears like a real unit to opponents lacking a detector. The hallucinated unit takes twice as much damage as a real unit and is incapable of dealing damage, but hallucinations prove useful in several ways. First, hallucinations are often used for scouting the opponent without risking the loss of any units. During battles, hallucinations can distract and absorb enemy fire. They can also be used early in the game (before detectors) to trick players into misinterpreting your strategy, or even leaving the game early if they feel terribly outmatched by the sheer number of (fake) units they see facing them.[2] This ability previously required research at the Cybernetics Core. However, this requirement was removed with Heart of the Swarm. Hallucinations do not count towards a units kills.

The Sentry's Hallucination ability is very frequently used for scouting. The most common tactic is to create Hallucinated Phoenixes, sending them flying across the map to look at the enemy's base or locate the enemy's army. More uncommonly, Hallucinations are intended to create a distraction, fooling an opponent. Hallucinations associated with certain tech trees, such as High Templar or Immortals can also be presented to the enemy to try instigate inappropriate reactionary counterplay.

Sentries also feature in several timing pushes, where the Force Field ability is leveraged. For example, warping in a Sentry alongside Immortals in a Warp Prism, while dropping them into the opponent's main base, the Force Field can keep the enemy army from defending by blocking the ramp. The high damage output of the Immortals can destroy key tech structures or kill several workers while the defenders are kept at bay by the Sentry.

Sentries are used often in Protoss mirror matches for holding off early rushes by placing a Force Field on the ramp, they also work offensively by pushing key units out of fighting range such as Immortals, and are a vital part of a mid-game army. Guardian Shield is effective in lowering damage from ranged Protoss units such as Stalkers or Adepts. With the energy cost reduction of Hallucination in Patch 4.7.1 Sentry openers have become more powerful, by being able to scout much earlier. This allows players to respond much earlier to their opponent's tech.

Sentries can make a huge difference in PvT. Force Field can be used to block Terrans moving in to try to target key units such as Colossus. This is vital to ensure that the primary damage dealers of the Protoss army survive. Another important ability is Guardian Shield. Since Guardian Shield reduces the damage of each ranged attack by 2, units that attack quickly such as Marines are heavily affected by the ability. The Sentry can be used to block off the ramp from early rushes. The sentry is also extremely effective if a Protoss player attacks early game; Guardian Shield retains its obvious usefulness, but Force Field is also extremely important when a Terran player has units in bunkers to defend. A common Terran tactic will be to bring several SCVs to repair the bunkers as they are under fire. Force Fields can stop SCVs repairing if Force Field is cast such as to surround the bunkers. This will also trap units that come out of the bunker if it dies.

vs Marauders
Sentries, in combination with Zealots, can be used to trap Marauders from moving back down the ramp, thus letting the Zealots kill off the Marauders more easily (negating the Concussive Shells upgrade). You can either split the opponents army and move back once the trapped portion of it is dead or, if you judge your army strong enough, trap the entire army.

Against Zerg, Sentries are considered useful in both the early and midgame. Force Field is vital in helping to block early Zerg rushes, as one Force Field will help block attempts to breach a sim-city at the Protoss natural. An important use of Force Field in the mid-game is to effectively wall off your army from Zerg attackers. Placing Force Fields to reduce the effective surface area of your army makes the Zerg swarm easier to deal with and destroy. Be mindful of Ravagers as Corrosive Bile can destroy Force Fields.

Sentries are a centerpiece of certain attacks such as the Immortal Sentry all-in that is also usually supported by Adepts with or without Resonating Glaives. These pushes usually involve about 6 or so Sentries and rely on proper Force Field management to be effective.