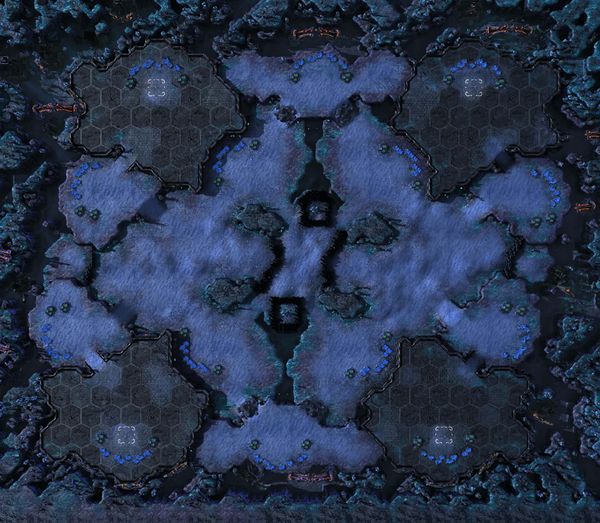 Shakuras Plateau is a four-player map released with the SC2 beta and originally intended for 2v2 play. It replaced Kulas Ravine on the 1v1 ladder on October 7, 2010[1].

Because of the strength of pushes between adjacent mains, especially in Terran vs Zerg, tournaments such as the TSL chose to disable horizontal spawn positions, and on February 26, 2011, Blizzard removed the map from rotation on the ladder[2]. Intended to ameliorate this issue, a new version, here referred to as 2.0, was released and added to the ladder map pool on March 22, 2011[3].

Your first expansion is easy to defend, but additional expansions push you farther into the battlefield. One central path to your enemy. Destroy rocks to open surprise attack routes.

Symmetrical distances are not shown to improve clarity.

A picture of an invisible pylon

There was a known bug involving a specific area in which a building of the smallest size, for example a pylon or a spire, could not be seen by anyone.