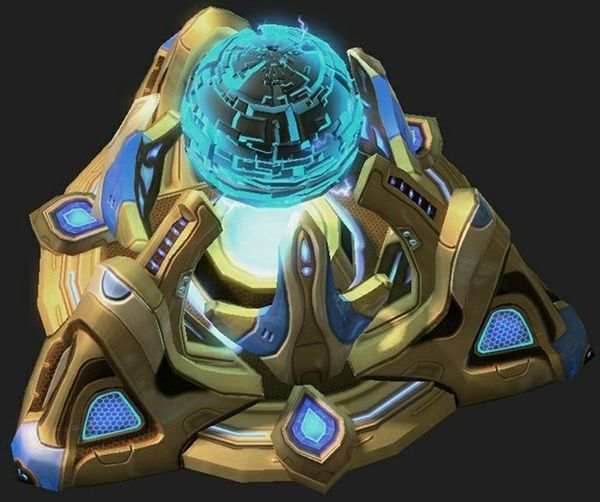 The Shield Battery is a structure that restores Protoss shields. While it was always part of the multiplayer in Brood War, it was only introduced to StarCraft II's multiplayer in Patch 4.0.0, filling the gap in Protoss defensive capabilities left by the removal of the Mothership Core and its Photon Overcharge spell. Shortly after that, in Patch 4.12.0 it became a target for the Nexus's Battery Overcharge ability.

A Shield Battery can restore shields of a single friendly unit or building within 6 range. Friendly units and Photon Cannons are automatically targeted. Other buildings may be targeted with a right-click. Shields are restored at 50.4 points per second, draining 1 energy from the Shield Battery for every 3 shields restored. Hence, a Shield Battery with full energy provides up to 300 additional hit points for nearby fights.

With their lack of mobility, Shield Batteries are generally most useful when placed in direct support of a defensive position; such as at the top of a ramp, or near a Nexus the Protoss player is trying to defend. This placement allows it to support the units that are most vulnerable to attacks, such as a defensive army or the Probe workers.

For example, against certain types of worker harassment rushes, such as a single Oracle or Banshee, a Shield Battery in the mineral line can keep the workers alive for some time (9 or 13 seconds, respectively), giving the defending player valuable time to react. Two Oracles or Banshees, however, can one-shot Probes, making Shield Batteries ineffective.

On the other hand, certain aggressive builds, such as proxy Void Rays abusing a cliff, profit from Shield Batteries supporting wounded units, amplifying the pressure a limited number of units can exert. Shield Batteries are especially prominent alongside a Cannon Rush in PvZ if the Protoss tries to extend the rush from the Zerg's natural into the main base.

Shield Batteries may also be used support Walling tactics. With a unit holding position in a 1-tile or diagonal wall, the Battery can automatically heal the held position unit to stop enemy units killing it and walking in. Batteries can also be manually targeted on damaged buildings. A partially constructed Battery can also temporarily fill a hole and be cancelled before they finish warping in. For example in PvP this can be quickly placed to stop Adept Shades from entering. Cancelling costs 25 minerals, but denying the damage one or two Adepts could have caused in a worker line or denying the scouting of vital tech will easily outweigh the cost of the tactic. Pylons may also be used for the same purpose and come with a small HP and shield advantage, but as they finish warping in more quickly, they allow less time for cancellation.