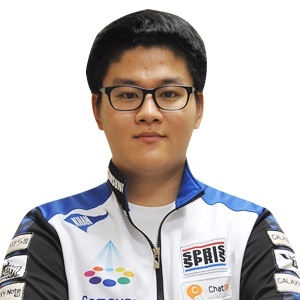 See Shine (Choi Kyung Min) for the player with the same ID (also a Zerg).

He now works as GSL Observer.[1]

Shine was a WeMade FOX Zerg that showed promise, making the quarterfinals of the 2009 EVER OSL and defeating notable players like FanTaSy and EffOrt.

Shine played his first official StarCraft II match during the hybrid 2011-2012 Proleague Season 2, he went 5-15 during the season.

In the first season of GSL Korea 2013 Shine made it to RO16. On his run, he placed second in his group for the RO32, getting beaten by Symbol 0-2, but then beating KeeN, Squirtle and KeeN again with continuous 2-0's. Having made it to the RO16, he faced off against Bomber, TaeJa and sOs. He placed last going 1-4 in matches, he lost to TaeJa 1-2 and then to Bomber 0-2.

Now in OSL Season 2, Shine was seeded into the RO48. He took out Seed 2-0 but was knocked out by MarineKing 1-2 and was knocked out of WCS 2013 placing worst than last season, only making it the RO32.

Shine was back again for GSL Season 3 where he placed even worse than last time around. Having been seeded into the RO48 through the Up and Down matches, he faced off against Creator and lost 1-2 thus ending his GSL run.

He did not place into Season 1.

In Season 2 Shine made to Code S. He made it through Code A by placing second in his group, taking out Panic 2-0 and Flash 2-1, not before losing to Hydra 0-2. In Code S, Shine made in through the Ro16, and in doing so he placed second in his group. He lost to sOs 0-2, but won against YongHwa 2-0 and sOs 2-1. Shine was drawn into group D of the Ro16, along with Soulkey, Zest and INnoVation. However, he lost 0-2 to both Soulkey and INnoVation and was knocked down into Code A.

Shine participated in Season 3 and made it out of his Code A group. Although he lost to TY 0-2, Shine managed to defeat both sKyHigh and ByuL 2-0 and returned to Code S. He was placed into Group A with EffOrt, sOs, and Classic. After losing to sOs 1-2, similarly to the previous season, he managed to defeat the reigning champion Classic 2-1 to face sOs in a rematch. Although Shine beat sOs in the previous season's Ro32 rematch, he was unable to repeat the feat and lost 0-2. He was therefore in Code A until Season 1 of 2015.