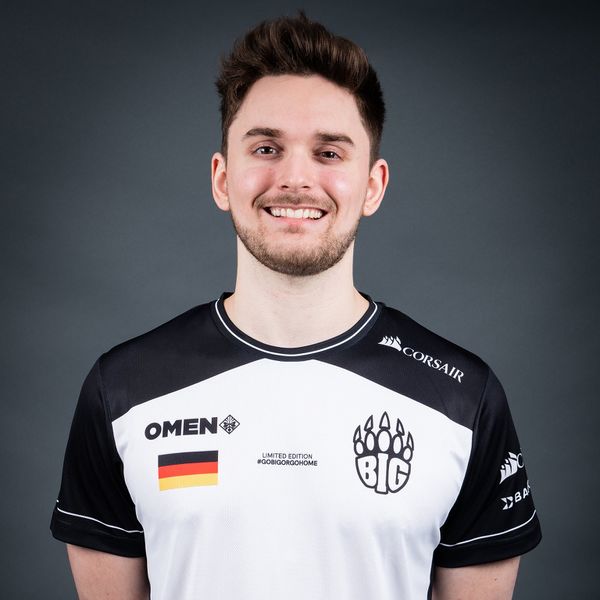 Tobias "ShoWTimE" Sieber (born February 23, 1994) is a German Protoss player who is currently playing for BIG.

ShoWTimE feels the most comfortable in straight macro games, and tries to gain advantages by out-macroing his opponent, although he is also able to show well executed all-ins. Therefore, his favorite player is Rain, because of his solid macro play style.[1]

Since the release of the game in 2010, ShoWTimE has been playing the game constantly but only turned professional shortly after finishing high school in June 2012. In September 2012, it was announced that ShoWTime would join Vega Squadron,[2] a team that ended up closing in January 2013.[3] A month later, he joined ESC Gaming.[4] On 1 August 2014 he left ESC Icybox and was looking for a new team.

He regularly played the qualifier for ESET Winter Masters 2012. In the end he collected enough points to qualify for the round of 16 of this tournament. The round of 16 was played online and only the top eight players were able to participate in the offline part taking place in Hamburg, Germany. He lost his match against Satiini but because Satiini was not able to attend at the offline event ShoWTimE earned his spot. On 19 January 2013 he faced his round of 8 opponent GoOdy against whom he lost and therefore being eliminated from the tournament. In February 2013 ESC ICYBOX announced that ShoWTimE would play for their team from there on.

ShoWTimE scored a second place in the ESET Masters 2013: Season 1 tournament. He later qualified for the 2013 WCS Season 2 Europe Challenger League. There, he lost to Premier League player BabyKnight to fall to the group stage. He defeated both TargA and San 2-1 to qualify for the 2013 WCS Europe Season 3 Premier League. In the Round of 32, he surprisingly defeated Mvp twice with 2-1 scores, securing him a place in the Round of 16. In the Ro16, ShoWTimE placed last in his group, losing to ForGG and Nerchio.

At the end of the year, ShoWTimE was able to reach the semi-finals of the EPS Winter Season 2013 in Cologne but was defeated by Socke.

2014 started good for ShoWTimE as he was able to qualify for the 2014 WCS Season 1 Europe Premier League, as well as winning the EPS Germany Spring Season 2014, winning against Patience 3-2 in the finals and proving himself as one of the best German players.

ShoWTimE went on to dominate the ESL Pro Series Germany in 2014, making it to the finals in all three seasons and winning twice. Unfortunately, he did not have the same success on international stages. He fell to Challenger League in the second season of WCS.

In June 2014, ShoWTimE participated in the 2014 DreamHack Open: Summer, his first Dreamhack event, and made it to the Ro16.

ShoWTimE made Premier league once again in the third season of WCS and shortly after it was announced that he had joined Team Alternate.

ShoWTimE qualified for the newly announced and heavily changed 2015 WCS Season 1. In his Ro32, group he won against iAsonu and MorroW, finishing first while luckily avoiding the group favorite Hydra. The Ro16, which was held in Poitiers, France was also no problem for ShoWTimE as he advanced as second of his group to the quarter-finals. There he met Kane, who to the surprise of many had won his Ro16 group. ShoWTimE strongly defeated Kane with 3-1, advancing to the semi-finals. Already being the underdog in this series against Hydra, ShoWTimE did not show his best games and lost 0-3. Still, this finish showed that ShoWTime was one of the up and coming Protoss players in Europe.

Because of his semi-final finish in Season 1, expectations were high for ShoWTimE in season 2 and he was heavily favoured against the WCS debutant Elazer. Surprisingly, ShoWTimE lost 1-3 against Elazer. On top of that, only one day later, it was announced that ShoWTime and Team Alternate had parted ways.

During this period, ShoWTime once again focused on the ESL Meisterschaft (formerly ESL Pro Series), after not participating in the Spring Season. In the Summer season, he was not able to repeat his 2014 success, losing in the semifinals against HeRoMaRinE. He also was invited to HomeStory Cup XI for the first time, but he dropped out early, in the Ro32.

After his disappointing WCS Season 2 finish, ShoWTimE was eager to repeat his Season 1 success. In his Challenger match, he had to play NaNiwa, whom he defeated in a close 3-2 series. In the Ro32, ShoWTime was seeded into a tough group with Jaedong, Sen and EPS rival HeRoMaRinE. Despite initially winning against Sen, ShoWTimE was not able to advance as he finished third in his group, while HeRoMaRinE finished last. This was ShoWTime's last appearance in a premier HotS tournament and he started practicing for Legacy of the Void around this time.

ShoWTimE qualified for the first LotV premier tournament, the DreamHack ROCCAT LotV Championship. He advanced as second of his group, only losing against PartinG and Bly. In the playoffs, he went on to beat three Zerg players, Elazer, Bly and Nerchio, in a row before losing to PartinG. ShoWTimE finished fourth overall, earning himself $3,000.

About one week later, ShoWTime faced HeRoMaRinE in the finals of the ESL Meisterschaft: Winter Season 2015. This marked the third time these two players met in a final of an EPS/ESL Meisterschaft. Having split the first two finals meeting, ShoWTimE closely won 3-2 this time, winning his third EPS/ESL Meisterschaft championship almost exactly one year after his second.

ShoWTime's success was not unrecognized and thus he was finally picked up by a team again. He joined Millenium on 11 December 2015.[7] Six days later, he made his debut for Millenium by participating in the HomeStory Cup XII. He was able to reach the quarter-finals, where he lost to FireCake 0-3.

Despite not being able to succeed in the qualifiers, ShoWTimE participated in the 2016 DreamHack Open: Leipzig. He easily advanced in the group stage beating Beastyqt and ZhuGeLiang. In the Ro16, ShoWTimE faced his teammate MarineLorD, whom he defeated closely 3-2. In the next round, he once again faced a teammate in Lilbow. ShoWTimE won 3-1 and thus moved on to the quarterfinals. There, he met the last remaining Terran player, uThermal. uThermal showed unique strategies, surprising ShoWTimE with a one-base cloaked ghost rush on the first map. ShoWTimE was not able to comeback and lost the series 1-3, ending his Dreamhack run in the Ro8.

In Tours, France, for the Spring WCS Spring Circuit Championship, ShoWTimE defeated Nerchio, 4-3 in the grand finals to win $35,000 and garner 3,000 WCS Circuit points, making the jump from rank 20 to rank 2 in the WCS Standings. As a result, ShoWTimE secured the second of three automatic seeds to the 2016 WCS Global Playoffs.

This PvZ matchup was a rematch from the Round of 32 at the WCS Winter Championship in which Nerchio defeated ShoWTimE, 3-2. On stage before the matchup, Nerchio stated that, "We both showed which region is the best outside of Korea, now I'm going to show you who is the best in Europe". ShoWTimE responded by saying, "I know you think you are better than me, but today you can't stop me and I'm taking home that trophy".

On his way to his Championship in Tours, ShoWTimE faced four Zerg opponents. He did dodge playing Snute in the Round of 16 as Guru knocked the Norwegian Zerg player out in the Round of 32. Being known for his solid defensive play in PvZ, he included early aggression timings to be less predictable.[8]

On January 1, 2017 it was announced that he had joind the newly formed ArmaTeam founded by Millenium's former manager Llewellys. The WESG 2016 Main Event was the first tournament he played under ArmaTeam's banner. In the group stage he placed second only losing to TY. His first playoff match was against Elazer. ShoWTimE defeated him 3-0. The next opponent was the Chinese Terran XY. As in the first playoff match ShoWtimE was once again able to beat his opponent 3-0. In the semifinal he faced Maru, one of the favourites to win this tournament. At this point both had a multi map win streak in this tournament, ShoWTimE winning the last 14 maps and Maru winning 13, not dropping a single map so far. But like the other players, SHoWTimE was not able to take away a map of Maru losing 3-0 and dropping down to the 3rd place match. There he faced Neeb who had lost against the other Korean Terran in the tournament, TY, in his semifinal. SHoWTimE lost once again and placed fourth in the end.