Siege Tank (Heart of the Swarm) 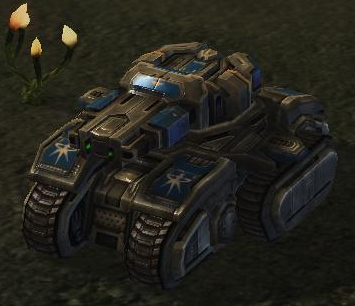 A Mechanical unit from the Factory with an attached Tech Lab. The Siege Tank itself has a high rate of fire and high damage versus Armored. In addition, it can switch to a Stationary Artillery unit that deals Splash damage over a large range and area.

While the Siege Tank is not as powerful as its Brood War counterpart. This Bulwark of the Terran army is mainly used for its Range and Splash Damage to effectively control the space around one's own base or around one's opponent's.

The Siege Tank's greatest asset is its range of 13. This is 2 matrices greater than the Tank's vision, so maximization of tank effectiveness requires a spotter, such as a Viking, Reaper or Xel'Naga Tower (or sacrificing Orbital Command energy for a Scanner Sweep). Placing Siege Tanks behind obstructing terrain will make opposing armies have to move around and give Siege Tanks more time to deal damage; cliffs an winding paths being the most obvious examples.

Defensively, Siege Tanks are at their best when used with wall-ins. Their range allows well placed tanks to rain down fire on enemy units trying to destroy the wall from well out of enemy range. Structures tend to have very high HP:resource ratios and are quickly repaired by SCVs, which means a few Siege Tanks behind a good wall can hold out against much larger armies.

Can be incorporated into a defensive opening to defeat against mass-Gateway pushes on two or three bases by Protoss, but are extremely fragile in TvP. Only effective against Stalkers and Colossi. All other high health Protoss units are a one-sided engagement that makes massing up a large Siege Tank count pointless as it does not give Terrans enough survivability while massing Tanks or pushing against Protoss. Most of this is also applicable to the Thor as well.

Siege Tanks and Vikings (to spot for the Tanks and control the air) remains the standard late game composition, using either Reactor-Hellion opening or 3 Barracks opening for a Mineral-based defense. Crucial at containment, holding ground in TvT to starve the opposing army to death.

One shotting Zerglings (assuming upgrades are even) and Banelings (regardless of upgrades) in siege mode, and being highly effective against Roaches giving Marines a strong buffer against these cheap and expendable Zerg units, before Mutalisks or Infestors can be produced in high numbers, this gives the popular Marine-Tank composition all its stopping power against Zerg.

Previously Mutalisks were the most popular choice for sniping tanks, which would leave Marines and Medivacs to fend for themselves, but Infestors are chosen to stop the Marines (the massing unit in this case) that leaves only a few Tanks to mop-up. In the late-game, Broodlords will hard-counter this composition, thus Vikings are required to gain air superiority.

The Tank is not as effective in the Bio-Mech composition now due to the introduction of the Widow Mine.