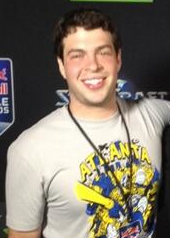 Robbie Switts is an upcoming professional gamer from Atlanta, GA. His alias "SirRobin" was inspired by the character in his favorite comedy, Monty Python and the Holy Grail. Robbie began his competitive Starcraft II career the summer of 2011. He attended Georgia Southern University throughout most of his gaming career. SirRobin is the founder of the Georgia Southern Starcraft II Club, eSports Club, and their CSL team.