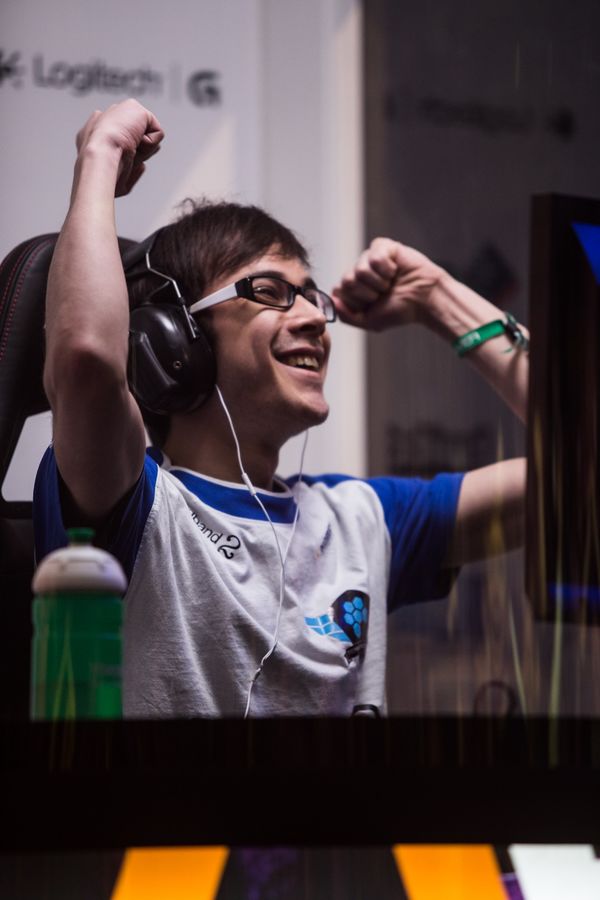 He now plays Hearthstone.[1] Before retiring, he played for team prOperty.[2] SjoW briefly switched his race to Protoss back in December 2013,[3] but announced 13 days later that he would be switching back to Terran.[4]

SjoW made a name for himself in the Warcraft III scene as a top tier 2v2 player with old teammate Delicato. After his transition to StarCraft II and a successful few weeks after launch, SjoW was signed by Team Dignitas as a sponsored player.[5]

- "I'm very happy to join up with Team Dignitas. They have warmly welcomed me into their family and everyone I talked to so far seems like great guys," says SjoW. "I will be representing Team Dignitas in the big online and offline events in StarCraft II. With this co-operation I will be able to make a name of myself and make Team Dignitas even more famous in the StarCraft II scene as well as improving my skills."

SjoW was known for his lack of scouting early game. At the time he stated that early scouting did not give him enough valuable information. He elaborated further by claiming scouting would only enable him to spot cheese which wouldn't change his build anyway.[6] By opting to not scout with workers SjoW would gain a better economy, enabling him to use safer builds. However, by the summer of 2011 he had started incorporating early game scouting.

SjoW is also known for having significantly lower APM than most of his opponents, but employs intelligent strategies and tactics to compensate for this.

SjoW exploded onto the scene after launch, winning the Inferno Online SC2 Cup 1, by beating MorroW in the finals.[7] This being Sweden's first big Wings of Liberty tournament, many of the country's top gamers had gathered, including HayprO, Jinro and MaDFroG. Shortly after, SjoW won ZOTAC Cup #17 defeating Socke in the finals. Since his first victories, SjoW has scored victory after victory in weekly cups, including CraftCup and Go4SC2 ESL events. Due to high playing activity and consistent results he was rated 1st on both GosuGamer's and TLPD international's rating lists longer than anyone else during 2010.

He stated in an August 2010 interview that he was going to leave Shark Gaming Systems[8] but did not confirm where he will be going. There were many rumours suggesting SjoW would join MyM. This was fueled by a previous MyM announcement that NaNiwa and ClouD would be joining MyM, which contained SjoW's ID tagged under the heading.[9] Surprisingly, he eventually joined Team Dignitas. SjoW later confirmed that he had been in talks with both teams, stating that an unfavourable contract from MyM as the reason for joining Team Dignitas instead.

Dignitas's first act after sponsoring SjoW was to send him to the MLG Raleigh event in America as one of the few invited players in the event. In this event he finished 5th, winning $500. In late October, SjoW together with Socke and Naama dominated DS Rack LAN by taking top three in the LANs two main events. Together with MaDFroG, Naama and ThorZaIN, SjoW qualified for the Nordic ESL Pro Series playoffs, to be played at DreamHack Winter 2010. All four contestants also made it into DreamHack's main attraction; the Steelseries LAN tournament where SjoW was considered one of the front-runners.

At DreamHack Winter 2010, SjoW was met with an early exit in the main event. The Swede went 1-2 in the group stages, losing to MorroW and ServaNT. His Nordic rival Naama went on to win the tournament and it's 100 000 SEK grand prize, MaNa took second and South American player Fenix finished third. SjoW got his redemption later the same evening when he won the Nordic ESL Pro Series finals against MaDFroG. ThorZaIN managed to beat Naama to claim a Bronze medal.

SjoW cemented his place as one of the best players in Europe after winning $7,500 in the IEM Season V - European Championships with a first place finish over White-Ra. SjoW dominated his opponents throughout the event and dropped only two maps on his way to the title, one to Socke in group stages and one to White-Ra in the best of five finals. SjoW didn't lose a single game to a Terran opponent during the event and ended up with a 16-2 record.

SjoW was one of the 50 players invited to participate in the North American Starleague. He was placed into Division B. SjoW finished the competition with a 6-3 record and progressed to the playoff bracket. SjoW lost 1-2 to DarKFoRcE in bracket four of the playoffs.

On August 19, 2011, it was announced that SjoW would join fellow Dignitas teammate and countryman NaNiwa in Korea for "GSL September".[10]

In late August 2011 SjoW showed some good results in the MLG Raleigh finishing 8th and receiving $400. On his way he defeated strong players such as Rain, IdrA and his teammate NaNiwa 2-0. On top of this he also managed to take games off of both Bomber and HerO. He was defeated in the match for 7th/8th place against HuK who was also the only other foreigner to place well in the tournament. This also meant that he received a seed into Code A in GSL October as HuK had already secured his spot in Code S.

Due to getting a Code A spot from the GSL-MLG Exchange Program, SjoW played in Code A of GSL October. He managed to beat Maka 2-1 in the first round before falling to Curious 2-0, therefore ending his run but retaining his Code A spot. In spite of retaining his Code A spot, SjoW announced that he would not be participating in the next GSL and would be returning home instead.[11]

On March 1, 2012, SjoW's contract with Team Dignitas came to its end and wasn't renewed, hence making SjoW a free agent.[12]

SjoW had a unique IPL Fight Club experience. He played an interim match against Socke and then had an official match against Polt.

On May 11, 2012, SjoW was invited to participate in the IPL Fight Club. This match was a unique match as it was not the next official match but circumstances changed the course of the tournament and SjoW and Socke volunteered to play for that week.[15] SjoW defeated Socke by a score of 5-4 and earned the spot to face Polt next.