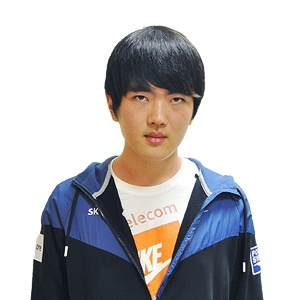 Sorry played in the 2012-2013 Proleague season, representing his team SK Telecom T1. He played only one match, where he lost to STX Soul's INnoVation in Round 3 Week 4

Sorry participated in GSL Season 3 getting as far as the Ro32 in Challenger League. He knocked out Symbol 2-1 but was then defeated by Savage 0-2.

Sorry qualified for the KeSPA Cup but lost to herO(jOin) 1-3 in the first Round.

Sorry was able to qualify for the 2015 Global StarCraft II League Season 2 Code A where he beat TaeJa to make his first Code S appearance. In the Round of 32, Sorry was seeded into a group with Solar, Rain and GuMiho. After beating Solar 2-0, Sorry lost to Rain 0-2. In the decider match, he fell 1-2 to GuMiho in a close series, thus finishing 17-24th in his first Code S. Due to his Code S run, Sorry was seeded into Code A in the 2015 Global StarCraft II League Season 3. There, he met Dear in a Best of 5. Despite winning the first two maps, Sorry was unable to beat Dear.

In addition to his improving individual results, Sorry was fielded more often in 2015 Proleague. He went 4-4 over the whole season. He was also the starting player in the finals for SK Telecom T1 against Jin Air Green Wings' Cure. Sorry played a proxy tank build, which was successfully defended by Cure, giving Jin Air the lead. In the end, SKT still won 4-2, making Sorry a Proleague champion.

On December 8, 2015, it was reported that Sorry's contract with SK Telecom T1 was renewed. A few days later, he qualified for the 2016 Global StarCraft II League Pre-Season, the first Korean LotV event. There he meet Symbol in the Ro16, whom he beat convincingly with a 2-0 score. Unfortunately, Sorry lost to herO in the next round 0-2.

Shortly before the year ended Sorry was able to qualify for the 2016 Global StarCraft II League Season 1 Code A.

In his Code A match, Sorry faced Cure. He was clearly beaten 0-3 and thus was already eliminated and sent back to Code B.

Sorry wasn't listed in the SK Telecom T1 roster for Round 3 of 2016 Proleague but he was still part of the team. When it was announced in October 2016 that the team would disband, it was mentioned that he retired.[1]