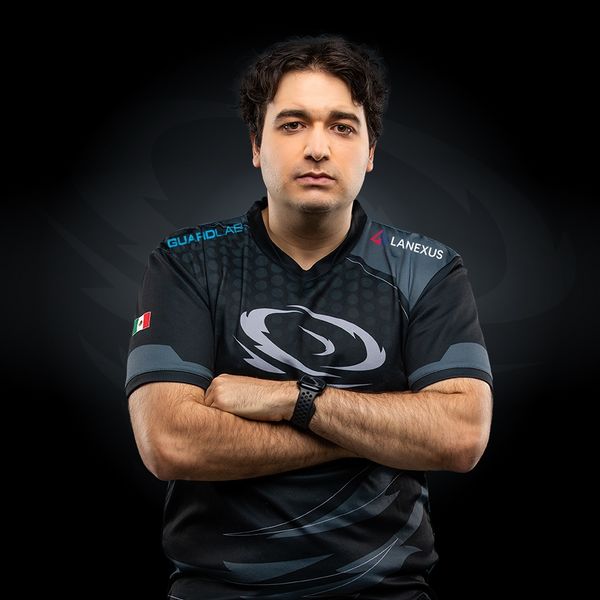 Juan "SpeCial" Lopez (born May 20, 1993) is a Mexican Terran player who is currently playing for PSISTORM Gaming.

He was previously known as MajOr.

SpeCial is known for his aggressive style of play, even during the mid and late-game, used in tandem with strong mechanics and multi-tasking. He usually prefers to use as much Bio and infantry as he can, taking full advantage of the mobility, using multi-pronged drops, attacks and pokes to beat his opponents into submission while he macros and multi-tasks more effectively. His early-game aggression is usually centered around the 2 Rax.

MajOr has played under a number of different IDs in the past including MajOr, Princess, Kitty, Terran, WinDy and SpeCial. As a Brood War player he was reputed to be incredibly gifted at the game considering his age. The well-known commentator Artosis stated that he was the next foreign player in line to move to Korea just before the release of StarCraft II. Being part of the GoSI clan, as, for example, the Woongjin Stars A-teamer Flying and playing in tryout matches against eSTRO-players confirm this impression. However, he was also known for frequently switching teams and said to suffer from a lack of respect and bad manners.

MajOr switched over to StarCraft II at fairly late point of time, well after Wings of Liberty was released. His potential was quickly realized and he was picked up by the team ROOT Gaming. However, due to disputes purportedly surrounding funding and maturity, he and ROOT Gaming parted ways after a period of roughly two months. On April 10, 2011 Artosis, newly appointed as the leader of Sixjax, recruited MajOr to play for Sixjax Gaming, where he continued to develop his knowledge of the game.[1]

In May 2011, MajOr played in the team Complexity showmatch (The "V") against popular Zerg player Spanishiwa, taking the series 4-1.[2]

In June, he participated in MLG Columbus 2011, fighting his way through the open bracket defeating Axslav 2-0 [3] and going into pool play, emerging with a final score of 2-3 after defeating such players as TLO and iNcontroL, but losing to LosirA, HayprO and Machine.[4] He then made it into the championship bracket, beating Tyler 2-1 but falling to Ret 0-2, which ended his run in the tournament, placing 16th.[5]

He was caught using another player's account to compete in Dox's SEA tournament, which was restricted only to those with SEA citizenship. MajOr used the account of an SEA diamond-level player named "sayfT", but this aroused the suspicions of mOOnGlaDe who was casting his tournament matches—noticing the Terran's unusually high-level play that was above and beyond the supposed diamond level of the account. "sayFT" continued to deny accusations of smurfing, but evidence was found on MajOr's own stream. This scandal has since created more problems for MajOr's reputation.[6]

Sixjax Gaming captain Dan "Artosis" Stemkoski provided a more sympathetic view to MajOr's behaviour, stating that 'he was a total kid', and that his age meant bouts of immaturity would be a given, comparing the Terran player to his own attitude in the past, and that he was continuing to help him along with his attitude. However. Artosis stated that he could not reveal Sixjax's official action against MajOr.[7]

MajOr made another showing at MLG Anaheim 2011, competing in the open bracket and defeating players such as Skew. He was stopped by wbc, who dropped him into the Loser's Bracket. He fought his way back up but was swept 2-0 by White-Ra.

He was one of the invitees to the 2011 Latin American Battle.net Invitational where he claimed first place, defeating Reason, CatZ and KiLLeR with a prize of $10,000 and a spot at BlizzCon.[8]

On September 2, 2011, MajOr was released from Sixjax. Team manager Evoli announced the release on September 4, citing MajOr's continued poor behavior and lack of professionalism despite repeated warnings.[9] In response to this, MajOr stated that Sixjax failed to comply with the promise to sponsor a stay in Korea, even after he himself had arranged one with team New Star HoSeo, which, along with not sending any team players to the 2011 MLG Raleigh, led him to quit the team.[10]

This led to another statement from the team, claiming that they had indeed made plans to send MajOr to Korea, but reconsidered after he lied to management about not wearing the official team jersey at 2011 MLG Anaheim, and having bad conduct with wbc after their match. Also, they claim that he swore against a teammate dde in a streamed online tournament in the course of several games.[11] On September 20 it was announced that he would be training with TSL[12] in their team house and his experiences would be documented by Artosis.[13]

MajOr played in Blizzcon 2011 where he lost to NaNiwa in the first round. He would then be taken out by JazBas in his first match of the lower bracket, 0-2.

On November 3, CheckSix Gaming announced that they signed MajOr, who also switch his handle to WinDy. Moreover, WinDy will participate in 2011 MLG Providence, and then will be staying for at least 4 months in Korea in order to focus on obtaining a Code A spot.[14]

On February 27, 2012, it was announced that MajOr had left CheckSix Gaming, after potentially receiving an offer from an as yet undisclosed team.[15]

MajOr participated in the IPL 5 North American Satellite Qualifiers. He received a BYE in round one and then went on to take down xOCHL and Navilo, and then went on to advance in to the finals to face Machine. In the finals, MajOr defeated Machine by a score of 2-1 and was able to take first place. His first place finish qualified him for the IGN ProLeague Season 5.

MajOr participated in the World Championship Series 2012 Mexico and was able to grab first place after overcoming Kukulkan, Cham, iTiLoVeYoU, Maker, JimRising, and Maker again in the finals with a score of 2-0.

On August 6, 2012, ROOT Gaming announced that MajOr had re-joined after winning WCS Mexico without dropping a map the entire tournament [16]

On August 14, 2012, MajOr was invited to participate in the IPL Fight Club. His first opponent was HyuN, although his debut was cut short as he was knocked out in his very first match up by a score of 1-5, and was not able to dethrone HyuN.

On November 26, 2012, it was announced by ROOT Gaming that MajOr had left the team, wishing to join a KeSPA team.[17] He rejoined the team about a month later, but with a clause in his contract stating that if the opportunity to join a KeSPA team did arise, he would be allowed to take it.[18]

Finally on January 2, 2013, MajOr would achieve his dream, as it was announced by ROOT that MajOr had exercised the option in his contract, joining KeSPA's 8th Team.[19] MajOr became the first non-Korean StarCraft II player to join a KeSPA team.

On March 24, 2013, MajOr played in the Proleague Special against his regular teammate, Terminator and lost.

MajOr was one of the twenty-four players invited to WCS America 2013 Season 1 Premier League.[21] He lost in the Round of 32 against HerO and aLive and fell into Challenger League. After losing to viOLet in the bracket stage, he defeated KiLLeR and Bails to requalify for Premier League.

It was announced on June 17, 2013, that he would be leaving the 8th Team due to Kespa cutting some of their players.

On June 23, 2013, MajOr played in his first regular season Proleague game, where he played against Flash of KT Rolster. He lost to the proxy Marauder build from his opponent.

In WCS America 2013 Season 2 Premier League, MajOr again fell in the Round of 32, but was able to take a 2-0 victory over Ryung in the first match before losing to him in the final match. He lost to ByuL in the bracket stage of Challenger League and fell to the group stage.