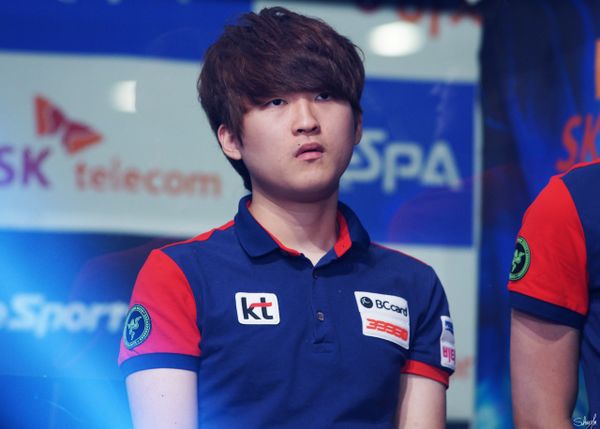 He played for Samsung Galaxy and SK Telecom T1 as a B-Teamer and eventually retired.[1] However, he returned to playing StarCraft II and joined KT Rolster on 8 May 2015.[2] He played for KT Rolster until May 2016 being listed as a teamless player when the schedule for 2016 GSL Season 2 Code A was announced.[3] SpeeD later stated that he had left KT Rolster to focus on his studies.[4]

SpeeD was in KT Rolster Roster for 2015 Proleague since Round 3, but never played a single game in Proleague in this year. He played the 2015 SSL Season 3 Qualifier and dropped out losing his first match against DeParture 1-2. SpeeD also tried to qualify for 2015 GSL Season 3, but lost against skyhigh in the first round.

SpeeD tried to qualify for both SSL seasons in 2016, but both times failed to advance out of the qualifier. In Season 1, he won his first match against DRGLing and had to face INnoVation next. Unfortunately, SpeeD lost this series 1-2 and dropped out of the qualifier. It did not get better in the Season 2 Qualifier which was held in mid-May 2016. After winning against the rather unknown Terran ArcLiTe, he lost against Super in the upper and against MyuNgSiK in the lower bracket and was once again not able make it out of the qualifier.

He qualified for 2016 GSL Season 1 Code A by beating eMotion in the third place match of his bracket. He faced Reality in his Code A match. SpeeD won the first two matches quite convincingly. In the third match, he opened with proxy two-rax reaper after doing the same thing in the first match. But Reality was prepared and was able to win this map, he also secured the win on the fourth map, tying the score at 2-2. But the final map went in SpeeD's favour and he advanced to 2016 GSL Season 1 Code S beating Reality 3-2.

He got seeded into a tough Code S Round of 32 group consisting of Solar, Creator and Classic. SpeeD's first match was against Solar. The first map was a close one with constant harassing on both sides, but SpeeD fell apart as soon as Solar started making ultralisks, and as a consequence lost the first map. On Dusk Towers, which was the second map, SpeeD constantly harassed Solar's eco with liberators and drops and got a good lead out of this, therefore winning the map. The last map was not as close as the other two games and Solar took a pretty convincing victory, meaning SpeeD would drop down to the losers match. After being up 1-0 in the losers match against Creator, he tried to proxy a factory and a starport but this was scouted before the starport was even finished. As a result, he was not able to do any damage. From this point on, he was behind and died to the first big push of Creator. On the last map, he opened three command center and dealt well with Creator's harassment, so he was able to defeat the Jin Air Protoss 2-1. In the deciders match, he faced Classic who had lost his match against Solar. On the first map, Dusk Towers, SpeeD tried to defeat Classic with a timing attack, but while he was not able to break Classic's defence, he lost more than 30 workers at his bases and had to give this map to the Protoss player. In the midgame of the second map, SpeeD took quite a bit damage to Classic's initial attack, which led to him deciding to SCV pull. He was able to deal enough damage to win the game tying the score 1-1. The third and final game was a pretty close macro game in which SpeeD was able to take the victory in the end, to move on to the round of 16.

His round of 16 group consisted of herO, Trap and TaeJa, while SpeeD had to face herO, who was the favourite in this group[5] first. He lost the first map to herO's Adept and Phoenix push after only seven minutes. The second game was even shorter, as SpeeD was not prepared for herO's proxy Oracle and had to tap out of the game after four minutes. Losing the first series 0-2 meant he would drop down to the losers match, where he had to play against TaeJa who lost his first series against Trap. The second series did not go in SpeeD's favour either. After losing the first game, a long macro game in which TaeJa claimed victory in the end, he also lost the second map as his opponent was able to siege and destroy his third base. Dropping both matches 0-2 meant he would end the tournament in last place in his round of 16 group.

In 2016 Proleague Round 1, KT Rolster had already qualified for the playoffs after five matches. In their sixth match against CJ Entus, SpeeD got his chance to play his first Proleague game for KT Rolster. He was fielded on Lerilak Crest, on which he defeated Classic ten days before, to advance to the round of 16 of 2016 GSL Season 1 Code S. But this time his opponent was not a Protoss player, but the Zerg player ByuL. Unfortunately, SpeeD lost his game which meant KT Rolster was down 0-2. They lost the match 1-3 and placed third in 2016 Proleague Round 1 Round Robin.

SpeeD left KT Rolster during Round 2 and was not picked up by a team before the start of Round 3, which means he will not be able to play another game in 2016 Proleague. As a result he will end the 2016 season with an 0-1 record, losing his only match to ByuL.

SpeeD played in Code S in Season 1, so he was already qualified for Code A of Season 2. He had to play against one of the players who advanced out of the qualifier. When the matches were announced SpeeD appeared as a teamless player, which meant he had left KT Rolster. However his opponent was his former team mate Trust who qualified for both GSL Code A and SSL Challange in Season 2. SpeeD's form against Protoss players was not that good going into this match. He lost against Super and MyuNgSiK in the 2016 SSL Season 2 Qualifier, while Trust won two out of three matches against notable Terran players, winning against Apocalypse and BrAvO and losing against GuMiho. But despite his form against Protoss looking bad, SpeeD was able to take the first two maps off of Trust. The next two maps which were Orbital Shipyard and Lerilak Crest did not went that well and as in his Season 1 Code A match his opponent was able to tie the score at 2-2. The last map was Frozen Temple and SpeeD was able to close the series 3-2. This meant he would once again advance to 2016 GSL Season 2 Code S. In his Code A interview SpeeD stated that he had left KT Rolster to focus on his studies.[4]

At the end of June 2016 the round of 32 groups of Code S were announced. SpeeD was seeded in group H which was played on 29 July 2016. The other players on this group were Dear, Patience and ByuL, with SpeeD facing ByuL first. The last time SpeeD face ByuL before this match was during 2016 Proleague Round 1 when ByuL defeated SpeeD to gain a 2-0 lead for CJ Entus in their match against KT Rolster. As last time SpeeD was not able to defeat ByuL and had to play against Patience in the losers match. While being able to tie the match at 1-1 on the second map, SpeeD did lose in the end dropping out of Code S.

SpeeD is considered to be retired as he stated in his Code A interview that he would like focus on his studies and has not be practising that much.[4] He also has not played any games, online nor offline, since his Code S group in July 2016.[6]

SpeeD attended the offline qualifier for 2017 GSL Code S Season 2. He lost his first match against Rogue, but was able to defeat the rather unknown Terran Sia. In the deciding game in which he had to face Rogue once again he lost 1-2 and was eliminated from the qualifier. It is uncertain if he wants to return to playing StarCraft after more than half a year or if his participation in the qualifier was a one time thing.