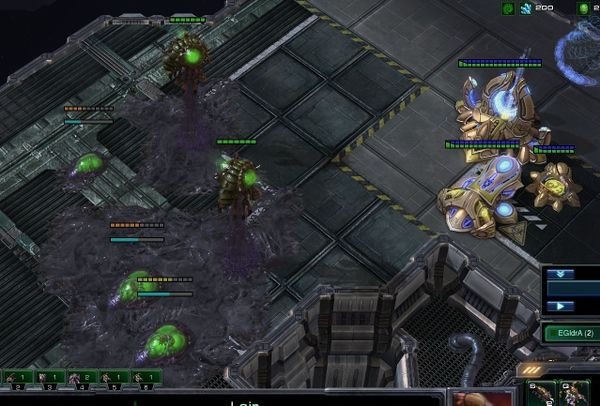 This build is essentially an all-in as the Zerg's economy does suffer due to getting a late 1st Queen, and if little or no damage is done and the Zerg went with an expansion-less opening he is miles behind the Protoss economically. You may wish to follow-up with an all-in involving any of the following: Zergling, Baneling, Roach or Hydralisk depending on if the opponent has opened Stargate or not; or continue the game as normal.

Since you get a very fast Lair, you will only have 1 Queen.

Make sure you have 2 Overlords in position and 300

outside of your opponent's base when the Lair finishes. Move your 3 Drones when Lair is about 75% complete.

As soon as Lair completes, start generating creep with your Overlords and place your Spine Crawlers as soon as possible.

This build should only be used against a Forge Fast Expand opening, so make sure you scout this opening before using this build. Otherwise, you need to watch for scouting Probes and kill them before they see a fast Lair.

Place the Spine Crawlers a bit outside of the vision of the Protoss base, that way your opponent cannot immediately see that you are building Spine Crawlers unless he scouts with a Probe or other unit. As soon as you kill the Forge or Gateway, try to run in with your Zerglings. Move your Spine Crawlers forward once you destroy the wall.

Since this is an all-in, there is little room for adaptation provided your Protoss opponent is able to hold without sustaining too much damage. If there is a second entrance via rocks (such as on Terminus SE), you can begin destroying it while your Spine Crawlers complete or while you're attacking. Otherwise, you are looking to end the game with your Zerglings as soon as you break the wall with your Spine Crawlers.

Since this relies on Protoss using a Forge Fast Expand opening, this works best on maps that favor such openings, however it will work on any map. The Zerg's goals with the rush can also affect good/bad map features, for instance if you simply want to attempt to snipe a Nexus, maps with wide open naturals such as Dual Sight and Xel Naga Caverns are preferable, whereas if you are backing up the rush with many Zerglings a map where a wall (and therefore the cannons it includes) is placed in a choke "ahead" of the expanding Protoss Nexus may be preferable, such as on Terminus RE.