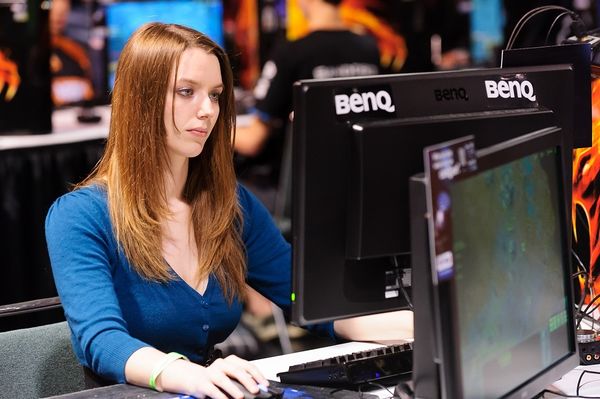 She is also known as "MsSpyte".

She has been playing StarCraft II since Wings of Liberty and although she does not have any prestigious wins under her belt, she has become a very popular streamer and she has been among the top 50 streamers since March 2013.[1] Late July, she got featured on TL.net, at which point she had almost reached the top 10.[2]

In November 2011, MsSpyte competed in Iron Lady Champion Cup 5, defeating Chicks 2-0, but losing to CadenZa 0-2 in the winners' bracket. She fell down to the losers' bracket and defeated Nattkatt 2-1, but was eliminated from the tournament by KTdonut after a 2-1 loss.

In the next Iron Lady, in January 2012, MsSpyte advanced to the semi-finals after defeating Silvare and Gully before being knocked down to losers' bracket by DaSakura, who took second place that tournament. In the losers' bracket, she won 2-0 over Navi, but lost 2-1 to AuRora, thus being eliminated.

In 2012, MsSpyte began competing in MLG. Her first MLG was the 2012 MLG Winter Championship in which she defeated colin21684 2-0 in the first round of winners' bracket, but lost to NamespaceSTD 0-2 in the second round. She then continued on in the loser's bracket from round two, defeating WronchiAnimation 2-0, but losing 0-2 to Attero in the third round.

In April, MsSpyte competed in the final Iron Lady cup, the Leetgion Tournament. There she once again defeated Chicks 2-0, but lost 0-2 to Aphrodite who subsequently came second overall. In the losers' bracket, she 2-0'ed Sunlily and Pandil, but was defeated 0-2 by flo, taking 5-6th place overall.

MsSpyte's next MLG was the 2012 MLG Spring Championship. This MLG ended fairly quickle with a 0-2 loss to Siphonn in winner's bracket and another 0-2 to Perfect. At her third MLG, the 2012 MLG Summer Championship, she fared a little better. After an initial 0-2 loss to asd, she defeated Gojira 2-0, but lost to LOZKev in the second round of loser's bracket.

In December, MsSpyte's stream showed up in Conti's monthly list of the top 50 streamers, in 43rd place in the category of viewers*hours. She was also in 42nd place for the whole year based on viewers*hours.[3] The next month, January 2013, she also showed up in the top 50 streamers based on average viewers, with an average of 434 viewers and a peak of 1037[4](although her peak record for 2012 was 1653). The next months, however, her viewership fell slightly.

After the release of Heart of the Swarm, MsSpytes viewership increased steadily and in May 2013 she broke the 2000 peak viewers threshold[5] and in June the 1000 average viewers threshold and landed on an 11th place in viewers*hours.[6] In July, as a consequence of TL.net's altered criteria, she became a featured streamer.