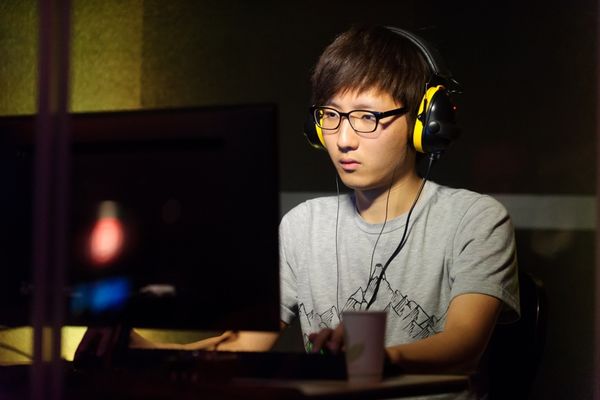 Squirtle entered military service starting from September 7, 2015.[1] He was dispatched from the military on June 6, 2017 and has started to stream.[2]

Squirtle is a former B-teamer on the team WeMade Fox where he played under the ID "Sea.hyun".[3] The coach of WeMade Fox would go on to create StarTale eSports Club, of which Squirtle was an original member along with many of his WeMade teammates.[4]

After leaving StarTale, along with his Protoss teammate PartinG,[5] Squirtle went through some time competing as a teamless player, and after much speculation, joined LG-IM.[6]

Squirtle was confirmed to be retired on December 1, 2014.[7] In June of 2017, he has finished his military service and begun streaming.

Squirtle arrived on the scene during the GSL Open Season 3, where he made a run through to the Round of 16 before being ousted 1-2 by the tournament's runner-up, Rain. Although not qualifying for the preceding seasons, his effort was enough to secure him Code A status for the first tournament of 2011. Squirtle, alongside teammate AcE, were 2 of the 4 South Korean invites announced for the IEM Season V - World Championship in March, 2011. This was Squirtle's first offline tournament outside of Korea. Unlike AcE, who dominated his group, Squirtle struggled in the group stage, eventually scraping out a 2-3 score. This ended up forcing a 3-way tie break with SjoW and Socke, who also finished 2-3. The 3 players were very evenly matched, and the series went into a total of four tiebreakers until the two Europeans finally fell to Squirtle. After taking out IdrA 3-2 in the quarterfinals, he was defeated by Moon and relegated to the consolation finals. He ultimately finished third, 3-2 over the Australian Zerg mOOnGLaDe.

Squirtle was invited to play in the first season of the NASL where he placed second in his group with a record of 7-2. He defeated Sheth in the first round, but was bested by PuMa in the quarterfinals.

September 14, 2011, Squirtle participated in the ESV TV Korean Weekly Season 1 Weekly 9. After taking down cOre, Shine, TREME, and Life, Squirtle went on to face TaeJa. He was not able to advance any further after he lost to TaeJa by a score of 2-3 and fell in to the 3rd/4th place match. Squirtle once again wasn't able to grab any more victories and had to settle for fourth place after losing to Creator by a score of 0-W.

From October 19 to October 25, 2011, Squirtle participated in the ESV TV Korean Weekly Season 1 Finals 3. To start off the tournament Squirtle was placed in Group B. After advancing through his group with a score of 2-1, Squirtle advanced in to the playoffs. In the playoffs, Squirtle took down Life and BBoongBBoong in order to advance in to the finals to face Tassadar. After defeating Tassadar by a score of 4-1, Squirtle grabbed first place.

From July 16 to July 28, 2012, Squirtle participated in the ESV TV Korean Weekly Season 3 Grand Prix #2. To start off the tournament, Squirtle started off immediately in the championship bracket. Squirtle defeated Tree, jjakji, and CoCa in order to advance in to the finals to face TaeJa. He wasn't able to take down TaeJa and had to settle for second place after losing by score of 1-4.

Squirtle was brought out as the ace player for StarTale in their match against Incredible Miracle in the February 2011 GSTL season. Down 3-4, he was brought out to play against GSL Code S January champion Mvp. He had an amazing game against Mvp on the map Terminus RE. The game was incredibly long and featured many unique strategies from both players. From unit compositions as varied as DTs to High Templar/Stalker/Zealot/Archon/Mothership to pure Stalker/(10+)Immortal, Mvp's tank lines eventually crumbled as he was starved out of his bases. Squirtle was eventually defeated by Season 2 champion, NesTea, bringing the overall score to 5-4 and giving the GSTL victory to Incredible Miracle.

In the proceeding GSTL seasons, although Squirtle has seen play often, he has not captured the same success he saw in the original season. Despite middling success, Squirtle and AcE are both heavily utilized as starters or snipers for StarTale.

In the 2011 GSL January Tournament, Squirtle was defeated 1-2 by sC, but not before reaching the Round of 16 to retain his status in the following season. After his inspiring GSTL performance against IM, Squirtle was disappointingly knocked out of Code A in the next season. Squirtle managed to secure another spot in Code A for the GSL May but was again eliminated in the first round. Squirtle would once again qualify for Code A for the GSL November as he was the top placing non Code S/A player in the ESV TV Korean Weekly/Finals 3. He managed to stay in Code A after beating Check in the Ro 48, but was unable to make it further after losing to SuperNova 2-0 in the next round.

In the 2012 GSL Season 1, Squirtle secured his Code A spot with a 2-1 win over Seal. He then defeated InCa 2-1 in the Ro 32, but fell to TaeJa 2-0 in the final round. He proceeded to go undefeated in his group in the Up & Down Matches with a final score of 4-0, defeating the likes of YugiOh, BBoongBBoong, KeeN and Avenge to finally secure his spot in Code S for the GSL Season 2.

In the 2012 GSL Season 3, Squirtle secured Code S status for the next season by beating GuMiho 2-0.

In the 2012 GSL Season 4, Squirtle secured Code S status for the next season by beating Hack 2-0, with both games having a two barracks proxy.

In the 2012 GSL Season 5, Squirtle secured his spot in Code A by beating Miya 2-0. In the second round, Squirtle lost 2-1 to YongHwa, falling down to the Up & Down Matches for the first GSL season in 2013.

After achieving first place in his Up&Down group, Squirtle was seeded into Group F alongside Leenock, MMA, and NaDa. He took first in the group only dropping a single game to MMA. In the Round of 16, he was placed into Group D with Maru, MC, and Oz. Squirtle defeated Oz and Maru 2-0 and advanced to the Round of 8. There he would have to face Team Liquid's TaeJa, who had previously defeated him in last GSL Code A Round of 24 0-2. He convincingly took the series 3-0 and qualified to the semifinals extending his win streak in the tournament to 11 games, having not lost since the opening game against MMA. He faced Team Liquid's HerO in the semifinals where Squirtle took him down 3-0 as well, advancing to the finals against four-time champion Mvp. There, Squirtle would fall behind 0-3 to the Terran player, only to stage one of the greatest comebacks in GSL history, including an epic game 5 on Metropolis featuring an Archon Toilet that wiped out Mvp's Battlecruiser fleet, to even up the score 3-3. In the final game however, Squirtle was unable to take down Mvp after deflecting a two barracks proxy and ended his run in second place.[8]

Squirtle, alongside ThorZaIN, KeeN and GuMiho were placed into Group C of Code S. Squirtle defeated ThorZaIN 2-0, but lost 1-2 to KeeN, falling twice to two barracks proxies. In the final match, Squirtle defeated ThorZaIN 2-0 once again to advance in second place to the Round of 16. In Group B, the "Group of Death", Squirtle was placed with Symbol, MarineKing and MC. Squirtle beat Symbol 2-0, but lost 1-2 to MC in the winner's match. The final match saw Symbol defeating Squirtle 2-0, knocking him down to Code A Round of 24.

Squirtle was placed into Group E alongside NaNiwa, Heart and Sniper. He defeated Sniper 2-1, and Heart 2-0 to advance to his third straight Round of 16. He chose Heart once again for his group, alongside HerO and Leenock. Squirtle beat Heart 2-0 once again, but despite an undefeated record against the other two players, lost 0-2 to Leenock and HerO, falling to the Round of 24 of Code A once more.

Squirtle was placed alongside Leenock, Bogus and KeeN in Group G. Despite having cheesed twice against Squirtle in the past, KeeN dominated Squirtle 2-0 with standard play. Squirtle then lost to another two barracks proxy and an allin to Bogus, meaning a 4th-place finish for Squirtle and failing to advance for the first time ever, dropping him to the first round of Code A. He later attributed his poor performance to a lack of practice.[9]

Squirtle qualified for the 4th season of the IPL through the Open Bracket, defeating Demonlord, ToD, ByuN, SaSe and AcE in the third bracket. In the Group Stage, Squirtle went 3-1, defeating PuMa, MC and Creator, only losing to Polt to advance in second place. The Championship Bracket saw NesTea defeating Squirtle 2-1, knocking him down into the loser's bracket. There, he proceeded to defeat Bomber, MarineKing and MMA, all 2-0, before facing NesTea once again in the Loser's Finals. Squirtle got his revenge as he defeated NesTea 3-2, securing a spot in the Grand Finals against aLive. Having to win two Best of 5s, Squirtle took the first series 3-2, but ultimately lost 0-3 in the second series, taking second place.

On July 9, 2012, Squirtle was invited to participate in the IPL Fight Club. His first opponent was CoCa. Squirtle defeated CoCa by a score of 5-3 and took his rightful seat at top of the throne.

On July 16, 2012, Squirtle faced his next opponent for the IPL Fight Club, VortiX. Squirtle defeated VortiX by a score of 5-3 and remained at the top of the throne.

On July 30, 2012, Squirtle faced his next opponent for the IPL Fight Club, Illusion. Squirtle defeated Illusion by a score of 5-0 and remained at the top of the throne.

On August 6, 2012, Squirtle faced his next opponent for the IPL Fight Club, HyuN. He lost to HyuN by a score of 3-5 and allowed HyuN to overthrow him.