Stalker (Heart of the Swarm) 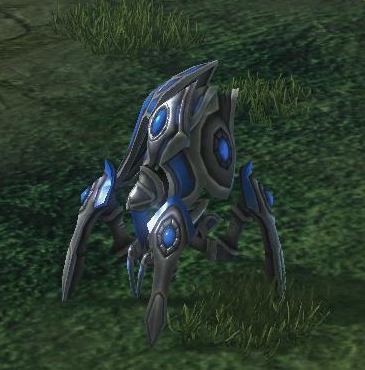 The Stalker is a fast-moving, ranged Protoss ground unit, capable of hitting both air and ground targets. They are warped in at the Gateway, and require a Cybernetics Core.

The Stalker's name is indicative of its hit-and-run capabilities: they have a relatively high movement speed, and after the Blink upgrade has been researched at the Twilight Council, they can advance or retreat literally in a flash, bypassing rocks and hopping up and down cliffs.

Blink is one of the most versatile upgrades in the game. It can be used for harassment, quick defense against drops or air units, and chasing down retreating units.

Blink requires vision of the area Stalkers are trying to reach. This means you will often need air units or Hallucinated Phoenixes to Blink into the enemy base. Using Blink is very micro intensive but can be extremely powerful on certain maps.

Additional details of the Blink ability can be found on the Blink main page.

The Stalker is a key component of ground armies due to its range, damage output, ability to counter air units, and attack bonus towards armored units such as Marauders and Roaches; however, Stalkers are relatively fragile units. As an armored unit, they are particularly weak to Marauders and Immortals. Generally speaking, a critical mass of 8-12 Stalkers, supported by 2-3 Sentries and 2-3 Immortals (Terran) or 2-3 Zealots (Zerg) will do extremely well against the Marine/Marauder/Siege Tank builds that are popular in TvP as well as the Roach/Hydra combo or Mutalisk/Zergling prominently used in ZvP. A large enough ball of Stalkers (in excess of 15-18) can hold its own against most mid-game builds and provides the player with a highly mobile army, capable of hit-and-run tactics. Stalkers can evade established defensive positions or abuse cliffs to get away from any pursuers. Against highly mobile harassment such as upgraded Reapers or Mutalisks, jumping in to engage with the Blink upgrade can help secure kills. Stalkers also augment any Protoss army since they have one more range than Sentries, allowing them to easily form a line behind Sentries to attack an enemy army.

An early swarm of Stalkers is the goal of most 4-Gate Rushes strategies in PvP. A mass of Stalkers that attacks early, around 6:30 or even earlier, can be extremely difficult for a Protoss opponent to deal with. In later stages of the game, Stalkers with Blink can provide additional mobility and harassment, but they struggle against the almost inevitable Colossus-based army in the Protoss mirror match-up. However, the anti-air capabilities of the Stalker can prove critical when dealing with alternative PvP strategies including Phoenix harassment and Void Ray rushes.

Before getting Blink, Stalkers are difficult to use in the early game because of the Marauder's Concussive Shells ability, which slows Stalkers to a crawl and makes them easy prey. However, Stalkers are essential for preventing any early Reaper or Hellion harassment. In the later stages of the game, Stalkers often prove critical for defending Colossi from Vikings. The general response to a large number of Stalkers is to produce Marauders without the anti-air capabilities of Marines, so a transition to Void Rays can be effective. Stalkers with Blink can be used to harass an enemy Terran and bypass a Bunker-heavy fast expansion. Stalkers can also effectively force an opponent to waste a Stimpack by engaging an enemy Terran infantry army and then Blinking and running away, effectively reducing the hitpoints of the Terran army while taking little damage in return.

Stalkers cannot be considered fragile units since they have the potential to out tank Zealots, however against Zerglings or Roaches one should add Zealots for damage support. They also fare well against Mutalisks, especially with the Sentry's Guardian Shield. It is also good to get some Stalkers to defend Colossi from Corruptors due to the bonus damage Stalkers deal to the armored Zerg air-superiority fighter.

Stalkers can be effective in the early game against Roaches because of their higher mobility, longer range, and attack bonus against armored units. While the Stalker should not be considered the hard counter to early Roaches, they can be helpful in keeping an aggressive Zerg player at bay by using proper micro. Stalkers are also useful late game against Broodlord armies, especially when combined with High Templar support. Blink can be used to easily pick off Broodlords one at a time, thus avoiding the Broodlings that keep most ground units from approaching the Broodlords. Using Blink against Zerg also allows Stalkers to escape Zergling surrounds, chase Mutalisks and quickly move weakened Stalkers away from the front of an army.

Stalker micro usually involves using Blink to climb cliffs, stutter stepping to use the Stalker's fast speed compared to most T1 units, and using blink to recharge the shields of stalkers at the front of the battle by blinking behind the army and losing attack priority.