Stalker (Legacy of the Void)

This article covers the current multiplayer version of this unit. For other versions see Stalker (Heart of the Swarm), Stalker (Wings of Liberty) and Stalker (Legacy of the Void Campaign). 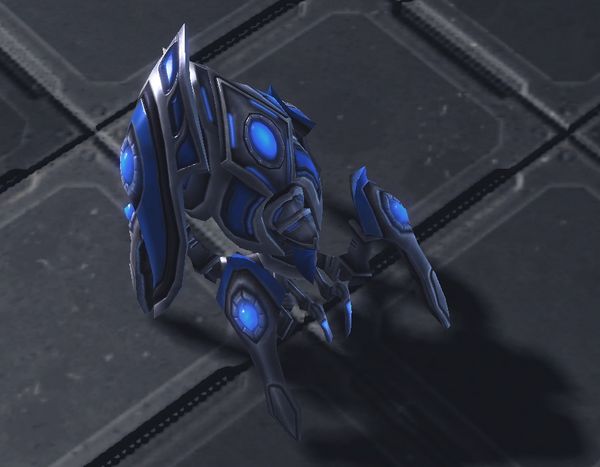 The Stalker is a fast-moving, ranged Protoss ground unit, capable of hitting both air and ground targets. They are warped in at the Gateway, and require a Cybernetics Core.

The Stalker's name is indicative of its hit-and-run capabilities: they have a relatively high movement speed, and after the Blink upgrade has been researched at the Twilight Council, they can advance or retreat literally in a flash, bypassing rocks and hopping up and down cliffs.

Stalkers have more health (160 vs 150), but deal less damage than zealots.

Blink is one of the most versatile upgrades in the game. It can be used for harassment, quick defense against drops or air units, and chasing down retreating units.

Blink requires vision of the area Stalkers are trying to reach. This means you will often need air units or Hallucinated Phoenixes to Blink into the enemy base. Using Blink is very micro intensive but can be extremely powerful on certain maps.

Additional details of the Blink ability can be found on the Blink main page.

The Stalker is a key component of early ground armies due to its ranged damage, speed, ability to counter air units, and early access to an attack bonus towards armored units (such as Marauders and Roaches). In Legacy of the Void, it is overall a very flexible unit. However, Stalkers are relatively gas inefficient units, particularly as an armored unit because this makes them weak to Marauders and Immortals, and Stalkers may get phased out towards the end game as more specialised units are unlocked in the tech tree.

Blink extends the flexibility of this unit in the midgame. Blink Stalkers can evade established defensive positions or abuse cliffs to get away from any pursuers. Against highly mobile harassment such as upgraded Reapers or Mutalisks, jumping in to engage with the Blink upgrade can help secure kills.

In LotV the Adept is another ranged option at the Gateway. It fills a similar role to the Stalker, as a fast and ranged unit with a movement micro ability, but is more tuned towards the early game as its Psionic Transfer ("Shade") movement ability comes pre-unlocked and it costs less gas than the Stalker. The Stalker is more favoured in the midgame it has higher stats and more general flexibility. Either of these ranged units may form part of a 4 Warpgate Rush.

Stalkers are generally strong in the PvP matchup due to their speed, durability, and micro capability compared to other Gateway units. An early swarm of Stalkers is the goal of most Gateway heavy openers in PvP. A mass of offensive Stalkers in an early attack, around 4:00 or even earlier, can be extremely difficult for a Protoss opponent to deal with provided they do not open with a Robotics Facility.

Stalkers are also highly favoured against harassment, particularly against Adepts due to their armored tag and higher ranged damage, even though the Stalkers do not gain their movement ability until the Twilight Council is constructed. Additionally, the anti-air capabilities of the Stalker can prove critical when dealing with Stargate strategies including Phoenix and Oracle harassment as well as Void Ray rushes. Blink and Shield Batteries can help enhance Stalker survivability against Void Rays as required.

However, for all their advantages Stalkers cost a significant amount of gas and delay tech rushes: even 2-3 Stalkers will cost as much as a tech structure and delay construction by up to a minute, and sustained Stalker production will effectively lock the player out of gas-heavy Stargate compositions. It may be worth considering spending the Warpgate cycles on Zealots or Adepts instead to simply save gas, ensuring that tech structures can be obtained on time.

In later stages of the game, Stalkers with Blink can provide additional mobility and harassment, but they will struggle against the almost inevitable Immortal-based army in the Protoss mirror match-up. Immortals fire faster and have higher bonus damage against armored, dealing about three times the damage for only twice the gas cost. If the enemy Protoss has +1 Ground Attack, it will let the Immortals kill Stalkers in 3 shots.

Stalkers are useful for preventing any early Reaper or Hellion harassment. However before getting Blink towards the midgame, Stalkers can be difficult to use in the because of the Marauder's Concussive Shells ability, which slows Stalkers to a crawl and makes them easy prey. Stalkers with Blink can be used to harass an enemy Terran if taken early such as bypassing a Bunker-heavy fast expansion, or alternatively access the main base high ground on some maps (an Observer or Sentry Hallucination will be required to gain vision, depending on intended followup to the timing attack).

However in Legacy of the Void in particular, Stalkers tend to fall off past the Blink timing, where late in the matchup their Armored tag becomes a hinderance rather than an advantage. Blink can help Stalkers blink in to remove a few early Tanks, but multiple Tanks are very strong against Stalkers – which with the type bonus, take a total of 70 damage per siege shot fired. Secondly, the need for Protoss Ground to Air is currently somewhat reduced as Terrans rarely need to use Vikings.[1] Although on the other hand, Stalkers still make excellent units for defending against Terran air harassment units such as Medivac drops, and Liberators, particularly with their ability to Blink past the Defender Mode attack zones, or to negate the Terran's use of cliffs.

It should be noted that when playing a Blink Stalker Disruptor style the goal for the Protoss player is to maintain as much distance as possible and use long range aoe splash to deter the Terran bio ball.

Finally, as with other matchups, Blink can be used to feint and bait the opponent into overresponding. Stalkers can also effectively force an opponent to waste a Stimpack by engaging an enemy Terran infantry army and then Blinking and running away, forcing the Terran commander to waste hitpoints and medivac energy, while taking little damage in return.

The Immortal Archon Chargelot army composition has become the most prominent in the matchup since the release of Legacy of the Void, due to the massive nerfs to the Colossus as well as the addition of the Lurker. These changes have made using large masses of Stalkers obsolete in favor of the beefier IAC composition. That said, when dealing with roaches, Overlord scouts, or air based tech switches they are competent all-rounders but outclassed by specialist units from the Robotics Facility and Stargate (against roaches and zerg air, respectively). Immortals in particular are far more cost efficient against enemy armored ground composition.

With respect to air, the speed boost from Blink is useful at chasing down small flocks of Mutalisks, however a large amount of Mutas can be very difficult to defend against without the help of Phoenix or Psionic Storm. Lategame a way to use Stalkers is as anti Broodlord units. One has to be careful of Lurkers on the ground nonetheless as blinking under Broodlords over Lurkers will result in losing the Stalkers for little to no gain.

In recent years Blink + Robo bay based builds have risen to prominence again as a timing oriented style that aims to hit the Zerg with an attack before more enough Lurkers or more advanced Hive tech units are out. This is opposite of the Chargelot Immortal Archon style which usually aims to scale into the late game. This comp is very effective against ling bane centric comps as the Colossus murders the ling bane, the Stalkers can soak up quite a decent chunk of banes and good forcefields can make it difficult or even impossible for the Zerg to get a surround on your army.

Stalker micro usually involves using Blink to climb cliffs, stutter stepping to use the Stalker's fast speed compared to most T1 units, and using blink to recharge the shields of stalkers at the front of the battle by blinking behind the army and losing attack priority.