Stargate (Legacy of the Void)

This article covers the current multiplayer version of this building. For other versions see Stargate (Heart of the Swarm) and Stargate (Wings of Liberty). 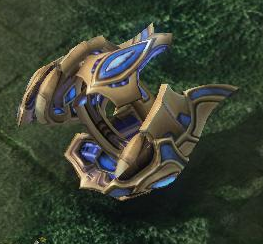 The Stargate is a unit producing structure for the Protoss, responsible for producing most of the Protoss air units. It requires a Cybernetics Core before it can be warped in. The Stargate produces the Phoenix, Oracle and the Void Ray, and after the Fleet Beacon is completed, the Stargate can also warp in the Carrier and the Tempest. The Stargate is one of very few structures that displays a distinctive animation depending on which unit is currently under production -- this means that enemy scouts are able to see what type of unit is about to appear.

Like most Protoss structures, the Stargate can only be warped in at a location powered by the Psionic Matrix. It can only produce units while it remains within the Matrix, otherwise it becomes unpowered and cannot function.

Stargate-based play is an option at all stages of competitive matchups. Phoenixes and Void Rays are used in several rush strategies, for example. The Void Ray is often deployed alongside a Colossus-based army to provide additional anti-air support along with helping the Colossus to destroy enemy structures in the later stages of the game.

Still, Stargate units are considered slightly riskier to deploy when compared to Robotics Facility units. In part, the lack of a mobile detector unit at the Stargate restricts the viability of early- or mid-game armies centered around Stargate units. Additionally, the Carrier is considered too slow and expensive to be a viable alternative to the Colossus in most matchups.

However, due to the expectation that a Robotics Facility is the likely Protoss option in the early- and mid-game, a Protoss player can sometimes gain the element of surprise by instead choosing to use the Stargate (especially if the Stargate is hidden from enemy scouts).

In Heart of the Swarm, Stargate openers are much more common and can in turn go into a completely new unit composition. In 2013 WCS Korea Season 1 Code S Round of 32, Creator used a Stargate Protoss composition against his Zerg opponent, Crazy. In 2012–2013 Proleague: Round 4, Stork uses almost exclusively Stargate units against another Zerg player, hyvaa.[1] Airtoss was also favored as a response to Swarm Hosts. In the end of Heart of the Swarm, after nerfs to the Swarm Host, the focus came back to Immortal/Sentry/Colossus based armies.

Oracles are commonly used in openings against both Terran and Protoss and can be effective harassment due to their high damage output, sometimes being proxied to be close to the opponent's base.

Legacy of the Void beta[edit]

In Legacy of the Void, Stargate openings gained focus again. Air Units are important in PvT to counter early Liberators, and the Carriers are more used as a result of their lower warp-in time, and of their new ability, Release Interceptors.