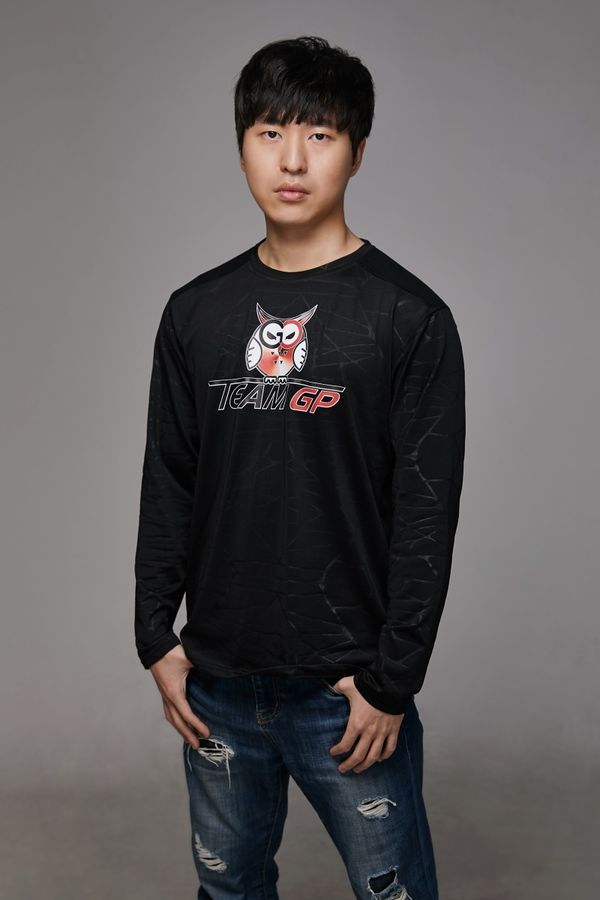 He was formerly known as "Vampire".

Super participated in the Korean StarLeague Daily where he managed to finish second 2 times. In the KSL Week 3 Day 6 he lost only to YongHwa and in the KSL Week 4 Day 3 to PartinG.

In 2011 Super tried to qualify for the GSL Code A tournaments. His closest attempt was in September where he made it to the Ro 4 of the 2011 GSL October Preliminaries where he lost 2-1 to Cezanne.

In 2012 Super finally qualified for Code A defeating MacSed 2-1 in the final round of the 2012 GSL Season 2 Preliminaries and made his Code A debut.

In the 2012 Global StarCraft II League Season 4, Super defeated HyuN in the Code A Round of 24 to secure a place in Code S for the first time.

In 2011 Super made the debut for his team MVP in the 2011 GSTL Season 1 in the match against Team SCV Life but lost to Clide in the 3rd set. He also played for MVP in the Grand Final against Prime. He played in the 1st set and lost to his opponent Check.

In the 2012 GSTL Season 1 Super played in the match vs Old Generations where he lost to TheStC in the 1st set.

In 2012 Super known as Vampire at the time participated in his first foreign event which was DreamHack 2012 Summer. He played in the first Group Stage and was placed into group 23 with Cytoplasm, Raest, and Slicer, Vampire didn't drop a map meaning he advanced into the next group stage. He was placed in a group with HuK, HayprO, and elfi he defeated HayprO and elfi but lost to HuK meaning he would advance in 2nd place to the next group stage. In the third group stage he would be placed with PuMa, Cytoplasm, and fraer, Vampire would lose to fraer and Puma but win vs Cytoplasm which would put him in third place and therefore was knocked out of the tournament. Super also played in the Acer TeamStory Cup his overall season stats are 13-7. In the offline finals he played vs Millenium where he all killed defeating ForGG, ToD, Goswser, Dayshi, and ForGG again. He played three more times, losing once vs Nerchio & Scarlett and winning once vs Nerchio.

In HotS, Super took his current name and took the GSTL by storm for team MVP in March-July 2013, earning a 9-1 record. In addition to all-killing FXO, he closed out matches against StarTale and Prime in order to earn the best record on his team, which brought team MVP to first place in the rankings. In the grand finals against Incredible Miracle, Super was brought out as the ace player against YoDa when his team was down 2-4. While he managed to defeat YoDa, IM's next player, Squirtle, closed out the series 5-3 for IM, marking Super's only loss in the entire GSTL season.

Super additionally played for MVP in the 2014 Proleague. In addition to being a regular on the lineup, he was frequently set out as the ace player. However, he was unable to close many of these ace matches out, eventually going 2-3, although he managed to help MVP make the Round 2 finals with an ace match win against CJ_herO. Despite finishing Proleague with a 14-12 record, MVP finished in 7th place, above Prime.

Although Super had been hovering between Code A and low Code S for a year, the arrival of WCS did not change anything for him. In the first WCS Korea 2013 season, Super defeated Kop 2-0 in the first round of Challenger League, but lost 2-1 to Hurricane, which qualified him for the Up & Downs for next season. While he did ByuN and ParalyzE, Super lost to Curious and EffOrt and finished in third place. This allowed him to play in the OSL Challenger League, where he defeated CoCa 2-0 before being set to the Up & Downs by another Korean Protoss in YongHwa. This time, however, he defeated Flying and YoDa to advance into Premier League. In the WCS Season 3 Premier, Super found himself in a difficult group with soO, Bomber, and YongHwa again. Although he didn't get the chance to take revenge on YongHwa, Super advanced in first place with a 4-1 score. However, his RO16 group of INnoVation, jjakji, and soO proved to be too much, and Super was eliminated from his group in last place.

His making of the RO16 of Premier League suggested that Super could become a regular Code S player, but he was relegated to Code A for the entire year of 2014. In Season 1, he was eliminated by Bbyong and Solar despite defeating FanTaSy. During Season 2, Super was defeated 2-1 twice by YongHwa again as was denied a code S spot again. Although he tried a third time in Season 3, he again got third place, beating herO before being defeated 2-1 by sOs and Reality.

Super has managed to qualify for both the 2015 GSL and the 2015 Starcraft II StarLeague in the first season of next year's WCS. In the SSL, he defeated ByuL 3-0 in order to qualify for the Group Stages.

Super joined Invasion eSport, which has since made an effort to send Super to international tournaments, on October 12, 2014. Because of this, he participated in IEM Season IX - San Jose, finishing 9th-12th. After making his way through the open bracket, Super found himself in a group with herO, Bomber, and qxc. Although he defeated qxc 2-0 in the losers' match, Super could not defeat either herO or Bomber and finished in third place.

On April 10, 2015, it was reported that Super and Invasion eSport had parted ways. Less than 3 weeks later, Korean Proleague giant KT Rolster announced that they had signed him.[1] After joining the team, unfortunately Super's individual results did not improve and he failed to qualify for GSL and the StarCraft II Starleague main tournaments, as well as any other individual tournaments, for the rest of 2015. He was fielded once in Proleague during the playoffs, where he defeated Jin Air's Cure.

He joined SBENU on December 1, 2015, as part of a player trade, with jjakji joining KT in return.

In November, 2016, Super was listed as part of team afnikka in the VSL Team League. In the first match versus TRAIN TO BUSAN he defeated Ryung and TRUE, then lost to ByuN. In the lower bracket match versus No Toss, he was sent in the last game to face Solar but was defeated by the Zerg and team afnikka was eliminated.