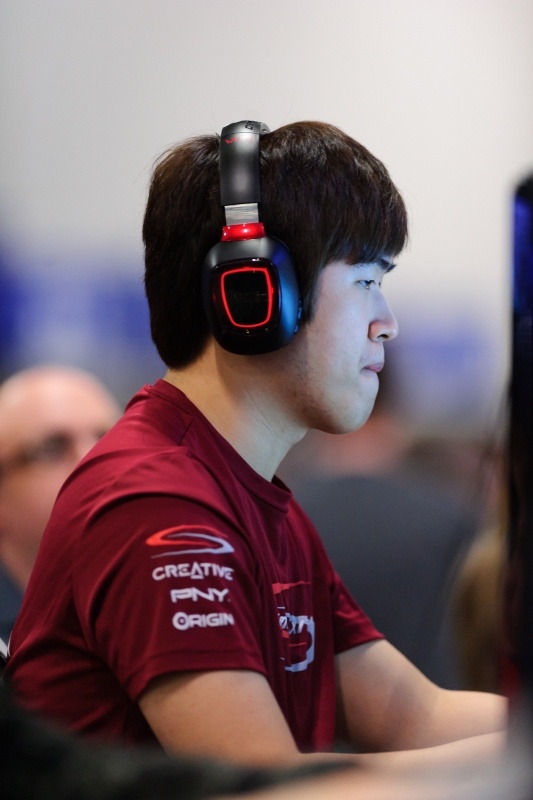 He was formerly known as "Killer".

In Brood War, SangHo was on team eSTRO before being accused during the Match Fixing Scandal of 2010 where he was found innocent. However, the fact that he was accused combined with his father falling ill made him retire. He currently writes a column called "Sangho's Viewpoint" on dailyesports.[1]

SangHo returned to progaming under the ID BabyByeBye when he qualified for the GOMTV GSL Open Season 2. He would win 2-1 against German TLO in the Round of 64 in his first televised match since retirement. He eventually reached the Round of 16 where he lost to MarineKing. After the season ended, he was invited along with 15 others to the GOM TV All-Stars Invitational 2010 where he was defeated by SlayerS_BoxeR 2-1. Despite failing to qualify for season 3, his placement would be enough to secure an A-Class spots for the GSL 2011 tournaments.

In the first tournament of 2011, Swagger would take out Gilja 2-1 but be defeated cleanly 0-2 by ByuN. Swagger managed to reach the Round of 8 in the second tournament of 2011 before being ousted by SuperNoVa. He would defeat Zenio 2-0 to secure Code S for the first time.

Swagger will be back in Code A in the first 2012 GSL season.

Swagger made a strong debut in GSL May where he would end up in the quarterfinals before being swept 0-3 by InCa. In GSL October, Swagger managed to barely make it out of his group with a score of 2-1, being the only Protoss player to make it out of the group stages of that GSL. This would not last long however, as he was eliminated 2-0 by CoCa in the following round, therefore ending all Protoss hope of that GSL.

In GSL November, Swagger was placed in group G for the Round of 32, where he displayed strong PvT. He scored 2-0 in his group by defeating jjakji and Virus. His next opponent was aLive in the Round of 16, who he lost to. He would then win the Loser's Match versus Happy and lose the final match to Oz. With the score of 1-2, he would fall down to the Round of 24 in Code A. There, he would make it into the Up and Down Matches and end up tied for fourth in his group, only beating MorroW.

On February 9, 2011, for the 2011 GSTL February, Team SCV Life sent out Swagger as their fourth player against StarTale. The score was in favor for StarTale at 3-0 at that point. Swagger was able to defeat AcE gave TSL their first victory of the night. StarTale sent out July next and Swagger wasn't able to defeat him. Swagger's loss allowed StarTale to increase the score to 4-1 and take the set.

On June 30, 2011, for the 2011 GSTL Season 1 Group A, Team SCV Life sent out Swagger as their starting player against Prime. Swagger took out Nettie and put TSL in the lead by a score of 1-0. Prime sent out BBoongBBoong next and Swagger wasn't able to defeat him. Swagger's loss allowed Prime to tie up the score at 1-1.

On July 14, 2011, for the 2011 GSTL Season 1 Group A, Team SCV Life sent out Swagger as their third player against SlayerS. The score was in favor for SlayerS at 2-1 at that point. Swagger was able win three games in a row and defeated Ryung, Min, and GanZi and gave TSL the victory against SlayerS by a score of 4-2.

It was announced on August 10 that Swagger was invited and would be participating in IEM Global Challenge Cologne. He finished third in his group, therefore not making it into the playoffs. Swagger later participated in IEM New York as one of the South Korean invites. He placed first in his group going into the playoff bracket, only to be defeated by his ex-Teammate FruitDealer 1-3, finishing 5-8th.

On July 23, 2012, Swagger participated in the 2012 South Korea WCS Preliminaries. Swagger received a BYE in round one and then took down EffOrt, Supreme, Avenge, and faced Leenock in the finals. He was not able to advance any further as he lost to Leenock by a score of 0:2 and took 2nd place.