Swarm Host (Legacy of the Void) 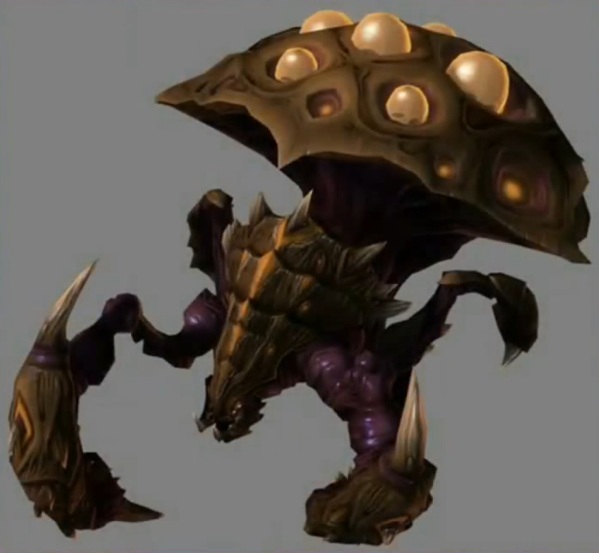 The Swarm Host is a Zerg siege unit that requires an Infestation Pit. It attacks in the form of spawning a pair of Locusts with an activated ability. The Locusts are slow-moving ground-to-ground units with a timed life that nonetheless extend the range of the Swarm Host beyond that of any other unit. Although the Locusts spawn as flying units, they are unable to attack in the air. They are able to fly over terrain and use the Swoop ability to land and begin their attack.

Spawn Locusts: Births 2 Locusts which deal damage instead of the Swarm Host. Locusts last 18 seconds and the Spawn ability has a 43-second cooldown. This is a manually activated ability and the direction the Locusts move after spawning is controlled by the player.

The Swarm Host has no upgrades in Legacy of the Void.

It is common to pair Swarm Hosts with Nydus Worms by having them exit a Nydus deployed near an enemy base only long enough to spawn the Locusts, and then escape via the Nydus.

Swarm Hosts can be very powerful against Protoss. Typically Nydus Worms are paired with the Swarm Hosts to give them added mobility while the Zerg player plays defensively at first. They can also be played with a more Map Presence focused style, complemented by Roach/Ravager groups looking for positional plays.

The first target of a Swarm Host player will usually be a Nexus, often in the opponent's Main Base. If caught off guard by the attack, the Protoss may got for an all-in attack while the Locusts are on cool down and the cost of the investment (especially supply wise) into the Swarm Hosts cannot help on defense. If a Locust wave is forced to be used defensively, the Protoss will likely back off until the Swarm Hosts are on cool-down again and continue applying pressure in an effort to stop the damage at home. It is unusual for a Protoss to sit back and not try to get counter damage, even if they have not taken major damage right away, as the Locust waves cost nothing but any potential Nydus Worms and will not stop until the Swarm Hosts are killed or rendered ineffective.

This strategy is especially effective against an opponent who has opened up without a Stargate. Almost all defenses against Nydus/Swarm Host play will require the mobility of flying units to push away spotters/deny Nydus Worms and minimize the damage from the endless waves of locusts. Oracles offer a very strong tool against the Locusts' short life in the form of Stasis Wards; once caught, every locust will expire before the trap wears off. Micro against this is very important, since any locust wave that does not do major damage to the Protoss economy, production, or army (especially more technical units) leaves the Zerg player vulnerable to a counter-attack. Sending in a few Locusts in advance to trigger any potential stasis wards can aide in reducing the threat, but may be killed by the defending Protoss army before they can Swoop. Overseers may prove invaluable since their Changeling ability can trigger stasis traps for only the cost of energy if dropped on top of active traps (which they would be able to see), or else simply verify the existence and position of any traps guarding a base. The Pulsar Beam of a single Oracle is also enough to kill a Nydus worm if caught early enough. If the Swarm Host player opts against using Nydus Worms, Revelations can be used to keep tabs on the Swarm Host group.

Aside from the benefits from Oracles, the Roach melting ability of Void Rays, and the raw power of Carriers, the Stargate allows for perhaps the most useful tool against Locust waves: the Mothership. Without sacrificing many Overseers, the Locusts will have no recourse against a fully cloaked base (unless the Mothership is by itself, covering a base while the army protects another). The Mothership may be rushed to before any other Fleet Beacon tech in order to gain this defensive tool. By this point, the Protoss player should be able to whether most Locust waves without too much trouble, and Swarm Host play will slowly taper off as the Zerg gets less and less from their supply in the Zerg army.

A crucial step in reaching the relatively safe (though the Zerg should have a well-developed ground and air army by this point) Late Game Mothership phase is the use of High Templar in the form of Psionic Storm and Archons. Storm should be researched right away after warping in some Templar to start gathering energy. When a Locust wave approaches, the Protoss will want to pull their Probes away and cast Storm(s) on the Locusts. Some static defenses should be able to clean up the remaining Locusts and will not be damaged from the Storm(s) like any army units would be (Stasis Wards are also considered buildings and will not be affected). With Energy expended, Templar can morph into Archons, which deal massive splash to the often stacked Locusts. Effective Storm/Stasis usage can mitigate much Locust damage on its own, and allows for simple resource spending: Minerals on remaking any lost Nexus/Probes and building up some static while Vespene is dumped into Templar. If the Protoss can effectively stop the bleeding, they will likely let the Swarm Hosts take on a lesser role and focus on getting Chip Damage (small damage over time that adds up) rather than committing to killing bases, while improving their army quality and teching up. A Templar/Archon/Air army should be sufficient to take additional bases and normalize into a typical Late Game with no more need to turtle on a low base count.

Massed Phoenixes can potentially kill locusts before they land if the air travel time is long enough, but their inability to deal with the worms themselves, as well as their weakness against the Swarm Hosts themselves means they should not be used unless the Swarm Hosts are added on after the Protoss has already gone 2 Stargate Phoenix and committed to some already. Once the Swarm Hosts are identified, Oracles should be made. Any Phoenixes made can aide in pushing away Overlords, and a small number may be made for this purpose, but Void Rays will make faster kills, threaten Worms on their own, and be more useful later on against an eventual Corruptor Transition.

The Protoss' necessary defenses against Swarm Hosts will naturally usher them into a strong, standard Late Game composition, but the Zerg will not be in a great long-term position tech and army-wise (aside from having the Infestation Pit already, in order to go up to Hive. If the Protoss player does not take decisive action, the game can end very or relatively quickly, with no need for the Zerg to tech beyond a Lair. It is typical for the Zerg to stay on Lair tech for a longer time than usual as they build their Swarm Host count and apply heavy pressure using Locust waves combining with Roach/Ravager attacks, either splitting the Protoss' focus in multiple locations or hitting together in order to wipe the field. The Zerg should have dominant map control and be able to take plenty of bases, but because Roach/Ravager/Swarm Host is so costly in terms of supply (but inexpensive in terms of Minerals/Gas, as Roaches are cheap and Locusts are free), it can be difficult to also have a high drone count. An important feature of this playstyle is managing how heavily the Zerg can lean on their opponent; it is crucial to either try to end the game on Lair tech or have a well planned and executed transition once the Locusts stop seeing big returns.

A strategy that has seen some play against Terran is the deployment of a small Swarm Host hit squad (usually four) that snipes the Terran's add-ons or harasses the enemy worker line. These Swarm Hosts may be paired with a Nydus Worm or Overlords to allow them to escape sticky situations.

Because the Zerg vs Zerg match-up is mostly about Roach wars (which consists of trading and counter-attacking), there is little use for the immobile and expensive Swarm Host, since a group of Roaches can do what it does but better. When besieging an opponent (say, attacking a wall of Spine Crawlers and Lurkers), Swarm Hosts are usually inferior to Vipers and Ravagers which are more mobile, powerful and practical. Roaches can generally just dodge the Locust wave and attack while it is on cooldown if Swarm Hosts are used aggressively.