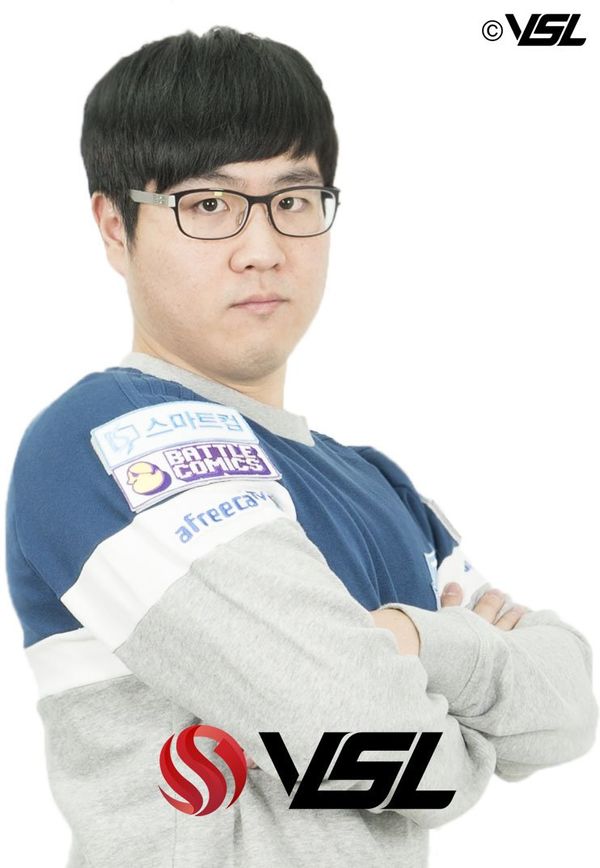 Symbol, who was reported to have switched from Brood War to StarCraft II in May 2011, remained a little-known player until the end of the year, making a single appearance in Code A.[1] He eventually rose to prominence from March to May 2012, placing second in both the Iron Squid – Chapter I and the MLG Spring Arena 2, and earning a spot in GSL Code S. A few weeks after these achievements, he became the first player to perform a reverse all-kill in GSTL.[2]

Prior to his StarCraft II career, Symbol (who was known as "NeeL" back then) was a Brood War progamer, a B-teamer in Hwaseung OZ. He never managed to qualify for a Starleague, nor was used in Proleague, but still attended GOM Classic Season 2 and 3, with little success though (quite interestingly, the first official match he ever played pitted him against another eventual successful SC2 player, IdrA).[3]

In May 2011, Symbol was reported to have switched to StarCraft II,[1] and was recruited by Team SCV Life at an unknown date in the following weeks.[Citation needed] He cut his teeth in ESV TV Korean Weekly online events, placing second in the Korean Weekly Season 1 #10 and winning the Korean Weekly Season 1 #16 without dropping a single set. Symbol's first attempts to qualify for the Code A weren't successful, as he failed twice to earn a spot the league (in the GSL October Preliminaries and in the ESV TV Korean Weekly Finals #3. He eventually earned a spot in the GSL November Code A (through the preliminaries), only to fall back immediately in Code B as Genius eliminated him in the first round. Symbol's misfortune continued in January 2012, with a failure to get a Code A spot in the 2012 GSL Season 1.

Symbol's career was about to take a turn for the better though: on January 22, he won the first Iron Squid – Chapter I qualifier (beating his teammates Polt and Shine), meaning that he would finally have the opportunity to compete in a premier event. On March 10, he also recovered his Code A status, qualifying for the GSL Season 2. At the end of the month, Symbol travelled overseas to attend the 2012 MLG Winter Championship, where he entered the open bracket for his first participation in a live foreign event. He was eliminated by Golden one step away from the championship bracket, and knocked-out Killer.

From April to May, Symbol started to rise to prominence; he had a successful run in the GSL Season 2 Code A, defeating sC, Seed, and ultimately the Terran-versus-Zerg specialist and former GSL champion jjakji, thus earning a spot in the Season 3 Code S. Simultaneously, Symbol battled in the Iron Squid – Chapter I group stage, where he found himself in a tied situation. He indeed lost to MC and Mvp, but defeated IdrA and ThorZaIN and eventually proceeded to the playoffs due a better map score. His opponent in quarterfinals was MarineKing, who had just won both 2012 MLG Winter Arena and Championship at the expense of DongRaeGu, considered to be the best Zerg player at the time. Symbol nonetheless beat the odds and inflicted a severe 3-0 defeat to his opponent, hence earning his ticket for the offline final four in Paris. On May 5, Symbol headed into the semifinals as the underdog once again as his opponent was the three-time GSL champion NesTea, regarded as a Zerg-versus-Zerg mastermind. Symbol pulled another upset, defeating NesTea 3-1 and proceeding to the finals. He would eventually have to settle with the silver medal, as he couldn't take the upper hand on MMA in this last match.

Two weeks later, Symbol attended the MLG Spring Arena 2, where he defeated Dream and Socke before losing to Polt. He made his way through the loser's bracket, kocking-out Alicia, Dream again, Heart, and finally MC in order to proceed to the loser's finals, where he faced Stephano. He overcame the French player 2-0, and met viOLet in the grand finals. Symbol eventually had to be content with the second place again, as he lost 1-3 to his opponent. With this second major achievement, Symbol had earned more than $12,000 in prize money in May 2012.

In June, Team SCV Life entered the 2012 GSTL Season 2. Symbol, who had already be used a few times by his team before (in the previous GSTL season and in the IPL Team Arena Challenge 2, where he displayed average showings[4][5]), carried his team in the first round as he delivered an outstanding performance. On June 4, when Team SCV Life faced Fnatic, Symbol was called by his coach as Fnatic was leading 3-1. He defeated Moon, Oz, ByuL and aLive, therefore securing a 5-3 victory for his team. The next day, Team SCV Life was pitted against Incredible Miracle for a place in the second round. The encounter took a dreadful start for TSL, which was soon led 0-4 by IM as LosirA almost performed an all-kill. Symbol was called as the team ace and made an improbable comeback, beating LosirA, YoDa, Happy, and the GSL champions Mvp and NesTea, therefore realising the first reverse all-kill of the history of the GSTL and sending his team in the next round.[2]

Two weeks later, Symbol made his debut in the GSL Code S, in the 2012 GSL Season 3. He convincingly took the first place of his round of 32 group, beating PartinG and MarineKing, and proceeded to the round of 16 where he was put into a tough group, with MarineKing again, MC, and Squirtle. Symbol lost his first match to Squirtle, but defeated MarineKing and took revenge on the StarTale's player, hence proceeding to the playoffs. Symbol faced Seed in the quarterfinals, and seemed to be on his way to the final four after he took an early lead 2-0. The Protoss player nonetheless made a comeback and won 3-2, hence ending Symbol's run in the GSL Season 3 (he still retained his Code S seed for the next season).

In 2012 GSL Season 4 Symbol placed second in his Ro32 group, beating YoDa 2-1, then losing to HerO 0-2, before clinching the qualifying spot, once again taking out YoDa, this time 2-0 and advancing into the Ro16. His Ro16 group consisted of Life, Seed, and Happy. All the players were good, with Seed being the winner of the previous GSL. Symbol got off to a shaky start, losing 1-2 to Seed. But he managed beat Happy 2-1, then Seed 2-1. clinching second in his group once again, and advancing to the Ro8. Here his opponent was Mvp a fearsome adversary, especially in TvZ. Symbol only took one set off Mvp, losing 3-1 and getting knocked out of the tournament. However he guaranteed his spot in next seasons Code S Ro32.

On September 27, 2011, Symbol participated in the ESV TV Korean Weekly Season 1 Weekly 10. After taking down Min, Jinro, finale, Nettie, and BBoongBBoong, he advanced in to the finals to face TaeJa. He was not able to advance any further and lost to TaeJa by a score of 3-4 and ended up taking second place.

On December 9, 2011, Symbol participated in the ESV TV Korean Weekly Season 1 Weekly 16. After taking down Tear, YangSongE, Tassadar, and TaeJa, Symbol advanced in to the finals to face Revival. In the finals, Symbol defeated Revival by a score of 4-0 and grabbed first place.

On July 2, 2012, Symbol participated in the 2012 OSL Non-KeSPA Preliminaries. Symbol received a BYE in round one and then took down 박진혁, TREME, Creator, and faced TOP in the finals. After taking down TOP by a score of 2:0, Symbol advanced in to the 2012 OSL Non-KeSPA Dual Tournament. There he was eliminated with a 1-2 record with losses coming from DongRaeGu and San.

On July 20, 2012, Symbol participated in the 2012 MLG Spring Arena. Symbol took down Dream and Socke before falling in to the losers bracket after losing to Polt. In the losers bracket, Symbol defeated Alicia, grabbed his revenge against Dream, and then Heart to advance in to the final bracket. After taking down MC and Stephano, Symbol went on to face viOLet in the finals. He wasn't able to defeat viOLet and had to take second place after losing to him by a score of 1-3.