This article is about the website TL.net. For the professional SC2 team, see Team Liquid. 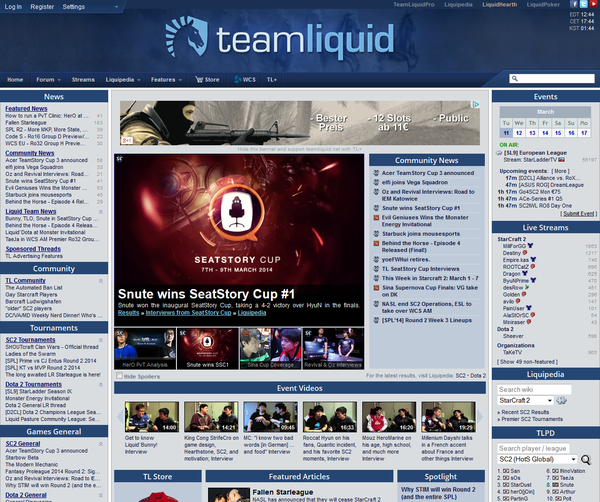 TL.net is the very website that is hosting Liquipedia!

Team Liquid started as a StarCraft clan that was founded by Liquid`Nazgul around the end of 2000. After leaving [i'm], he spent about 3 months thinking about what to do next, before making the decision to start his own clan, which held 4 members for the first months and slowly grew to 8 players a year later.

The website was later founded, on May 1st 2001, by Liquid`Nazgul and Liquid`Meat with the name teamliquid.cjb.net and some pages of this first website have luckily been preserved and can still be seen. On September 22nd 2002, the website then moved to the now known address, with this post as the grand opening and a day later the very first poll in which there even was the danger the site would have gotten the name of likwit.com

TL.net would attract StarCraft players from all over the world, even Korean players would come and report about the emerging Korean professional BW scene. Over the years TL.net grew and grew and expanded with new concepts.

On November 24th 2010, it was announced in this post that TL.net would have two full-time staff members, Hot_Bid and R1CH, who would be living and working together at the new headquarters in New York City.

During the summer of 2011, TL.net got an unofficial mascot, Elly the ESPORTS Elephant, which was drawn by HawaiianPig and which accompanied some of the error messages on the site and later also the adblock banner.

On August 31st 2012, it was announced that TL.net would cover Dota 2 as well as Brood War and StarCraft 2. The Dota 2 news would be intersped along with the other news and Dota 2 would have its own section on Liquipedia.[1]

August 27th, Nazgul announced through his blog that TL.net would move its headquarters from New York City to the Netherlands, into his old apartment there. The staff that would live in the new headquarters would be Hot_Bid, R1CH and disciple, while Nazgul himself would commute there. WaxAngel and Heyoka, who previously worked at the NY headquarters remained in the US and continued their work from there.

The picture on top of Team Liquid is from a painting done by Jim Warren called Avalanche. Contrary to popular belief, it is not from Lord of The Rings, though the scene from LotR where the Nazgul are overtaken by the river did influence the choice to use this banner. The original design was done by Smorrie. In January 2008, Team Liquid was contacted by the creators of the artwork, with the message that they loved the banner, also asking to get properly credited for it. Since then, a link to Jim Warren's website can be found in the footer of tl.net.

The new banner, used since August 22, 2010, still include the horses in the background.

Team Liquid as a gaming clan[edit]

Team Liquid was, of course, a clan as well as a site. Some of its members even went to play in Korea for a while. The history of Team Liquid, the Brood War clan, can be found over at its Liquipedia Broodwar page

Team Liquid also moved on to StarCraft 2 and 13th of August 2010, it was announced that they would send three initial players, Nazgul, TLO and Jinro to Korea to compete in the upcoming GSL. They got sponsorship from The Little App Factory and you can read all about it on their Liquipedia page.

On February 25th, 2003, the TeamLiquid "SC:BW theorycraft ladder" Liquibet was announced.[2] The first Liquibet season started on March 4th, 2003. Each season winner is given a special icon, displayed next to the user name in forum posts.

On October 15th, 2010, Liquibet 2 was launched[3] to provide Liquibet for Starcraft II leagues.

On November 22nd 2006, it was announced that TL.net would have a new site feature called the Power Rank.[4] It would be DJEtterStyle's subjective view of Korean progamers, described as: "This list consists entirely of my picks of who is hot right now". It would be a monthly write-up of with a good reasoning for every one who got placed on the list. In time, there developed a CBNC - Close But No Cigar - list as well, for those players who almost, but not quite got on the list.

On November 1st 2007, FakeSteve announced that he would be taking over the Power Rank as DJEtterStyle couldn't find the time anymore.[5] September, October and November saw one Power Rank write-up by DeadVessel and two by OneOther, respectively, before FakeSteve got back to writing them until May 2009, when JWD took over. After that, it quickly turned to riptide in October 2009, and then to Plexa in 2010, with occasional write-ups by earlier writers and Waxangel and finally flamewheel took over in November 2010.

There are also plans for a StarCraft 2 Power Rank, but seeing as the game still hasn't settled, those plans have yet to come to fruition.

On July 18th, 2007, a post announced a new site feature called Teamliquid: Final Edits.[6] It would be a series of articles of very high quality spanning a large range of StarCraft and eSports related topics. The articles would be written by the regular staff members as well as pro-gamers or anyone who would submit an article for review by the staff.

From the beginning of the Final Edits in summer 2007 to the end of 2009, there were 75 Final Edits, but after that, they have been occurring only sporadically, although still remaining a feature of the site. The entire list of Final Edits can be found here.

The TLPD data are used in:

On February 24th, 2008, the first episode of TeamLiquid Attack was produced. Team Liquid Attack is a direct ripoff of the Korean show Battle.net Attack!, where Korean pro gamers would play against opponents on Battle.net, while talking to the commentators beside them. The show starts off with the hosts announcing the channel that they and the player will sit in. The people in the channel are encouraged to convince the player that they are worthy of a game with the pro. Sometimes, the hosts would set up other top foreigners to play against that episodes player and on some occasions hide the players identity to make it even harder.

The first two seasons of the show ran from February 24th to March 30th 2008 and the episodes can be found at Team Liquid Attack page in Liquipedia 1. Each season featured five episodes for a total of 10 episodes and a total of 9 players (with NonY, who is known as Tyler in SC2, playing in two episodes).

The third season transitioned to StarCraft 2 and started off August 7th 2010 with another episode August 21st. Unfortunately, no third episode was made because "every weekend someone [was] busy".[1]. 2011, however, saw the return of Teamliquid Attack, with a special 3v3 show during a break in TSL3 and regular episodes airing from May and onwards. The episodes and additional info can be found at the TeamLiquid Attack! page.

On March 31st, 2008, TeamLiquid announced that it was going to hold an international StarCraft tournament, the TeamLiquid Star League, TSL. It had a prize pool of 10,000$ and was sponsored by Razer.

After the highly successful Razer TSL the fans screamed for another season. 1 year and 5 months after the finals were done their cry for more was met. TeamLiquid announced another season of TSL, with PokerStrategy.com as the sponsor.

On September 7th, 2010, TeamLiquid announced a new series of tournaments: The TL Open, 512 player open registration Starcraft 2 tournaments run entirely through the website and sponsored by Altitude, BattleDex, but mostly by TeamSpeak 3.0.

On the first day of 2011, TL.net finally announced the Pokerstrategy.com TSL3 and the remaining TL Open's turned into qualifiers for TSL3.

On August 5th 2008, the first steps to what would become a fully incorporated site feature was taken when semioldguy announced in this thread that he would hold a Fantasy League for the 2008 Club Day Online MSL. The concept was that people would choose certain players that they thought would do well and then gather them into an imaginery team and get points when the players actually did well. It was all organized via the forums and PM's. In November the same year a similar Fantasy League, this time for the second round of 2008-2009 Shinhan Bank Proleague, was held, again by semioldguy through the forums.[8] HotBid helped out with statistics and update threads,[9] and it was eventually considered the very first FPL - Fantasy ProLeague. For the second Fantasy MSL League, there was an automated entry functionality added to teamliquid,[10] and by the third season of Fantasy ProLeague, the FPL had become an integrated part of TL.net.

Although the Fantasy MSL's ceased after just two iterations, the Fantasy ProLeagues continued on and June 20th 2011, a Fantasy GSTL was announced in this thread. However, the subsequent change in format for GSTL did not lend itself to a Fantasy League,[11] and as of December 2012, no new Fantasy GSTL has been held. However, with Proleague's switch from Brood War to SC2, the 13th season of FPL was announced on December 7th 2012,[12] coinciding with the first round of 2012-2013 Proleague.

On June 6th, 2009, Liquipedia was announced,[13] but only the Brood War section, Liquipedia 1, since StarCraft 2 had not yet been released.

On April 7th, 2010, Liquipedia TV: Strategy Hour was announced[15]. It was a show dedicated to looking at certain strategies in StarCraft 2 and analyze why they would work or not work, also helping new players to get into the game. The first episode featured LaLuSh who inspected a zerg opening. 22nd of August 2010 a second episode was streamed [2], this time featuring qxc looking at a terran build.

On August 31st 2012, Liquipedia opened its Dota 2 section as well, coinciding with its announcement that it would add Dota 2 as its third game to officially cover.[16]

On May 11th, 2011, the website TeamLiquidPRO was officially launched. It was created to focus on coverage of the Liquid Team, leaving TL.net become more of a news and community website. The site features provides TeamLiquid-specific content like:

June 22nd 2013, Hot_Bid announced in this post a new feature for the TeamLiquid site; TL+. TL+ is a feature where users can pay a monthly fee to get access to a special TL+ forum, get to see the site without ads and several other features pertaining to viewing and sorting posts and PM's. It's possible to gift TL+ to other people based on a post they write and new icons showing whether a member is a TL+ member or a TL+ gifter (or both) were introduced.

Although not an "official" tl.net project, the TeamLiquid Fansub Team is a loose coalition of people who happen to sub (translate and make subtitles) eSports programs, clips or shows and present them on the TL.net forums as a product of the Teamliquid Fansub Team. Among the things that have been translated are:

Another unofficial project is the TL.net census. Although at first, it was done sporadically by random posters and only asked for the age of the members, it has grown and been done yearly in April since 2010, asking for much more information, like location and ethnicity.