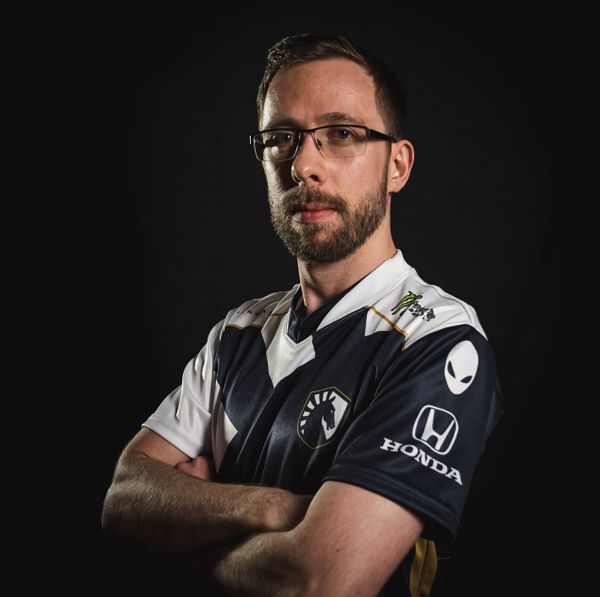 TLO is a former Brood War and Supreme Commander player. Known for his happy and carefree demeanor, as well as his unique strategies, TLO is a favorite of fans worldwide.

He played Random during the Beta, switched to Terran after launch, and again to Zerg around BlizzCon 2010. In early 2011, he announced returning to Random after a period of relative inactivity due to injury, but then switched back to Terran in March 2011. More recently, TLO has gone back to playing Zerg, starting during Battle in Berlin.

TLO's tactics became very popular during GSL when he used Nuclear launches to confuse his enemy while he dropped marines in his opponent's main base or to move his enemy's army where he wanted to ambush them. TLO's Terran play is overall very solid, strategically flexible, and hard to break.

After seeing his unique play and creative builds during the Team Liquid SC2 Invitational #1, a fan club thread was created on the Team Liquid forums: TLO Fan Club Thread. That same strong play earned him his invitation to join Team Liquid.

TLO enjoyed a very successful beta period with two Go4SC2 ESL cup victories, a ZOTAC win and second place in the International PLU.cn Kaspersky Cup. Due to his popularity and success, he was invited to Day[9]'s King of the Beta tournament.

TLO kicked off Wings Of Liberty with two live events. He won a Best of 5 showmatch against MaDFroG at the European Warcraft Regionals[2] before heading to the IEM Global Challenge Cologne to play in the live $15,000 tournament.

On August 13, 2010, it was announced that TLO was heading to Korea with other Liquid` members: Nazgul and Jinro in preparation for the GOMTV Global StarCraft II League. They stayed in the oGs House with players like Ensnare and TheStC and competed in South Korean live events, as well as online events from around the world. On the 28th of August, TLO qualified for the GOMTV StarCraft II Open 1 after going through Group B1.[3] He advanced to the Round of 32 before losing to house mate oGsHyperdub 1-2. TLO's victory in the first set became one of the most viewed VoDs on GOMTV.[4] TLO qualified yet again for GSL Season 2 where he encountered former Brood War player SangHo in the Round of 64. He ultimately lost 1-2 in what was his final televised match as a Terran player.

TLO was one of the 2 representatives of Europe for Blizzcon 2010. He later competed with the entire Team Liquid roster at the MLG Dallas National Championships where he placed 5th.

In early November, it was announced that for unspecified personal reasons, TLO was returning to his home in Leipzig after the MLG Dallas event and competing in the foreign scene. Speaking in the Liquid Weekly #14, TLO said that "due to a number of reasons I do not wish to go into at this time, living and playing in Germany is what will benefit both me and my team the most right now."[5] Although his results in the previous 2 GSLs qualified him for Code A for the 2011 January Tournament, TLO chose to remain in Germany instead. He has since participated in the DreamHack SteelSeries LAN-Tournament as one of the 16 invitees where he was upset in the group stages by MaNa and LaLuSh.

On May 22, TLO streamed StarCraft for 24 hours straight in order to raise money for Doctors Without Borders. The charity marathon, dubbed "Starcraft Without Borders", proved to be an enormous success, raising over $2487 in ad revenue and earning him the nickname "Dr. Dario". The stream for this event peaked at 26,000 live viewers, overtaking the official NASL stream which was also live during this period.[6]

TLO was one of the 50 players invited to participate in the North American Starleague and was placed into Division 1. He ended the season with a record of 10-11 in his group, with four series wins and five series losses, placing sixth in the division and 28th overall, qualifying for Season Two. However, he relinquished his spot in the tournament.[7]

At MLG Columbus 2011, TLO went 1-4 in Pool D, winning against Machine, but losing to HayprO, iNcontroL, LosirA, and MajOr. He lost to ViBE in the Championship Bracket knocking him from the tournament.

On June 10, 2011, TLO announced he was taking a break from playing SC2 due to the Carpal Tunnel Syndrome he experiences in both hands. He will continue to be involved in the E-sports scene during that time, whether it be casting or some other organizational role.[8] On July 18, it was announced that TLO has been recovering well, and managed to qualify for Germany's WCG Playoffs.[9]

At MLG Anaheim 2011, TLO went 1-4 in Pool A, winning against Tyler, but losing to DongRaeGu, HayprO, HuK, and NaNiwa. He lost to his teammate Sheth in the Championship Bracket, after beating iNcontroL, knocking him from the tournament.

TLO saw a modest run at MLG Raleigh 2011 where he found himself in Pool C. He finished 1-4, falling to SeleCT, Slush, teammate HerO and DongRaeGu, although he managed to defeat TricKsteR 2-1.[10] His run in the championship bracket was short-lived as he was knocked out by DeMusliM 2-0. TLO finished 25th in the tournament.[11]

On September 10, TLO competed in The SHOUTcraft Invitational #3 and placed in a tournament for the first time since January 2011. He lost to White-Ra 3-0 in the third place match, finishing 4th overall.

On September 14, he defeated GoOdy 3-1 in a best of 5 showmatch, organized by the German community.[12]

TLO played in MLG Orlando where he was seeded into Group A. TLO managed to beat Drewbie in group play, but lost all of his other matches, therefore placing second last in his group. In the Championship Bracket, he would lose in his first match to Polt 0-2, ending his run in the tournament in 22nd place behind his teammate Tyler.[13]

For Battle in Berlin and 2011 MLG Providence TLO chose to again switch race and play Zerg.

TLO's most recent placing in 2012 was at the ASUS ROG The GD Invitational he was placed in group B with Kas, elfi, & MaNa going 3-0 in series and only dropping 1 map to MaNa which placed him straight into the Semifinals he then went up against elfi, losing 1-3 which gave him a final placing of 3rd/4th in the ASUS ROG The GD Invitational. TLO also participated in 2012 DreamHack Open/Bucharest where he was able to go through the group stages and reach the quarterfinals, beating notable players, such as Ziktomini, Beastyqt, and Harstem, before ultimately losing 0-2 against Nerchio, who ended up winning the tournament.

Made the Ro32 at HSC 5, meaning he was not able to attend group stages at TaKe's place, having fallen short in the online qualifiers.

TLO did much better at DreamHack Bucharest only losing in the Ro8. In his run he took out Harstem 2-1 but the lost to Nerchio 0-2. This would be one of his best result for 2012.

He finished in the Ro12 for DreamHack Winter. Finishing third in his group stage going 9-6, he then have to face Snute. He loses with a score of 1-3.

The last event of 2012 for TLO would beHSC 6. He would top his group in group stage 2 over MC, Grubby and Kas going 4-1 in matches. In the playoffs, he faced the Korean Zerg player Symbol, in a close series TLO ends up losing 2-3 in the Bo5. This would conclude 2012 for TLO.

Starting the year off strong, TLO reached the Ro8 at IEM Season VII Katowice. In the group stage round robin style, TLO placed second over Grubby, mOOnGlaDe, Snute and Tarson. In the Ro12, he defeated MaNa 3-2 to face First. First proved to be too strong and 3-0'ed TLO.

At IEM Season VII World Championship TLO placed 21-24th. He lost in the round robin group stage with a 2-8 record, his group contained Mvp, Dream, Stephano, Golden and Grubby.

In the first season of WCS Europe, TLO finished in 5th place taking out Shuttle, Kas, Strelok, MMA but ultimately losing to Mvp 0-3, the eventual champion of Season 1.

At DreamHack Stockholm, TLO got as far as the Ro16 losing to NaNiwa 1-2.

At WCS Season 1 finals TLO placed in the Ro16, finishing third on his group, winning against Stephano 2-1, but ultimately losing to Soulkey and aLive without taking a map. He finished with a record of 2-5.

Making it as far as the Ro8 at DreamHack Open Summer, he took out Squirtle in the Ro16, but lost to TaeJa 0-2.

His highest finish of the year happened at HomeStory Cup 7, where he finished third overall. In group stage 1, he placed second within his group over Dragon and Harstem, with Seed taking first, he went 5-2 in the group. In group stage 2, TLO placed first overall over MC, Bunny and NightEnD with a record of 4-2. Bunny and MC each took a game off him. In the playoffs, he would 3-1 Violet, but fall 2-3 against TaeJa. He ultimately won 3-2 over HyuN and took third place.

Season 3 of WCS Europe would be same as Season 2. His group consisted of Happy, duckdeok and SaSe. He went 3-4 in games and 1-2 in series.

At DreamHack Bucharest TLO made it as far as the Ro32, getting knocked out by Nerchio and elfi.

At HomeStory Cup VIII, TLO went as far as the Ro32, getting knocked out by MC and HeRoMaRinE.

For the last tournament of 2013, TLO attended DreamHack Winter. He ended up placing in the top 13-16th, barely advancing in the group stage to play JYP in Losers round 1. He got 2-0'd by the Korean Protoss player and his run ended there.

The first event TLO attended was WCS Europe. He made it as far as the Ro16 before getting knocked out of a group containing BabyKnight, Welmu and StarDust. He finished 1-4 in maps, losing 0-2 to StarDust and 1-2 to Welmu.

His best result so far was at IEM Sao Paulo in which he placed 3rd-4th. He qualified online taking out StarDust, Kane, Snute and MaNa. In stage 2 of the offline event, he finished second taking out Shakti and hellokitty. He went 4-2 in games losing only to MC. In stage 3, TLO upset Bomber 3-2 but fell to herO 1-4.

He requalified for Premier League in WCS Europe Season 3 by defeating Namshar 3-2 in Challenger League, despite losing the first two maps. In Premier League, he was placed in a group with Welmu, uThermal and LiveZerg. He was able to advance from his group in first place, beating both LiveZerg and uThermal. In the Round of 16, he faced VortiX and the two Koreans YoDa and San. He lost to YoDa in the opening match, then defeated VortiX in the losers match. Unfortunately, he fell to San in the decider match and did not advance to the Round of 8.

TLO started of 2015 by narrowly qualifying for WCS Season 1 by defeating Miniraser 2-1 in the last European qualifier. He went on to defeat Ret 3-1 in Challenger League, to qualify for Premier League. In the Round of 32, he was placed into a group with Polt, Kelazhur and Jim. After suffering a surprising 0-2 defeat against the relatively inexperienced Kelazhur, he managed to come back and defeat Jim 2-0. In the deciding match, he faced Kelazhur again. This time, he got the better end of their encounter, winning 2-1 and advancing to the Round of 16. In the Round of 16, he lost to ForGG in the opening match but managed to defeat XiGua and Serral in order to advance to his first WCS Round of 8 since 2013 WCS Season 1 Europe.

Heart Of The Swarm Beta[edit] 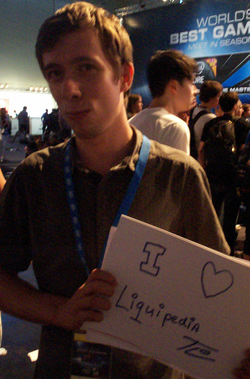