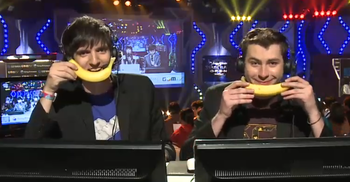 Tastosis, the casting Archon, is the self-given nickname for the broadcasting team of Dan "Artosis" Stemkoski and Nicolas "Tasteless" Plott. They are the primary English-language broadcasters for the GOMTV Global Starcraft II League and have been featured in many tournaments worldwide.

Tastosis' synergy, analytical skills and humor have largely contributed to their widespread popularity. As a result they are highly respected and possibly the most beloved English casting duo in Starcraft II.

In September 2011, a documentary was announced, with its central focus on Artosis and Tasteless in Starcraft II.

Both Artosis and Tasteless began as Brood War pro-gamers, rivals and friends. They began casting together at BlizzCon in 2008, as well as the WCG 2009 Grand Finals in China. Later they would cast Season 2 of the Team Liquid Starleague, and their highly positive reception resulted in the coining of their moniker, Tastosis. -- the Casting Archon.

In 2010 they would be picked up by GOMTV to host the GSL, and continue to do so.