The three seeds in the TeamLiquid StarLeague 4 will be the final three from the previous edition, ThorZaIN, NaNiwa and Kas.

Marcus "ThorZaIN" Eklöf is a Swedish Terran player from team Evil Geniuses. His return in the TeamLiquid StarLeague 4 will be a special moment for him, as his victory in the 2011 edition was his big break in the StarCraft II scene. Since then, the "Spoon Killer" has become one of the most successful foreign Terran players.

ThorZaIN entered the Starleague as a relatively unknown player, and most of viewers would've bet against his chances of proceeding to the second round. His first opponent was none other than FruitDealer, winner of the first GSL and regarded as one of the best Zerg players in the world. ThorZaIN, surprisingly, knocked him out 2-0, and faced Tyler in the next round. The reigning champion of the TSL couldn't identify the Achilles' heel in ThorZaIN's playstyle, and the Swedish player swept him aside 3-0.

In quarterfinals, ThorZaIN met the heavily favored MC, at that moment two-time champion of the GSL. ThorZaIN took an early lead 2-0, but MC managed to tie up the series and came back at 2-2. The Swedish player finally earned his spot in the final four by winning the last game with a heavy use of Thors. ThorZaIN faced Kas in the semifinals, and despite Terran vs Terran being his worst match-up at the time, he was able to eliminate the Ukrainian player, and proceeding to the finals. His final adversary was his compatriot NaNiwa, who outmatched him during the first games, eventually leading the series 3-1. However, ThorZaIN managed to win the three last games in a row in order to win the tournament.

Now he is one of the most famous foreign players. ThorZaIN, who had joined the prestigious team mousesports after his victory against MC, had a well-rounded career; he spent some time in Korea and competed in the 2011 GSL August Code A with little success, as he was eliminated in the first round, but still lived up to his fans expectations in GSTL, winning three games against MVP's players. ThorZaIN was also highlighted in the 2011 DreamHack Valencia Invitational, where he defeated HuK and HerO before facing the Zerg vs Terran mastermind DongRaeGu in a series that ended in the favor of the Korean player. In December 2011, the Swedish player failed at the foot of the podium of the North American Star League Season 2, still taking home almost $10,000.

ThorZaIN's crowning achievement in his homeland occurred in April 2012, in the 2012 DreamHack Open Stokholm. Despite a rocky start, he flawlessly made his way to the finals (losing only one game from the last group stage to the final match) where he overwhelmed Polt, hence laying the best possible foundations for his participation in the TSL 4.

Johan "NaNiwa" Lucchesi is a Swedish Protoss player from team Quantic Gaming. He is returning in one of the competition that made him famous. 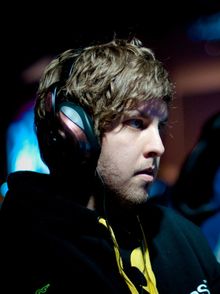 When he qualified for the TSL 3 in January 2011, NaNiwa was already a well-known player in Europe, for his in-game skills (he was the first player world-wide to reach a score of over 4000 points on the ladder, and was the runner-up of the HomeStory Cup II), and above all for his reputation as a controversial player (earned because of his behavior that led him to be banned from both the ESL Pro Series Germany 17 and the IEM Season V, and to be forced to switch teams frequently).

NaNiwa nonetheless quickly proved that he would be a force to be reckoned with in this TSL; he indeed knocked-out Ret in the first round, and won the 2011 MLG Dallas in a dominating fashion a week later, losing only two games in the entire tournament. He comfortably defeated the Panzer General GoOdy 3-1, and went on facing CrunCher in quarterfinals. The American player, who had eliminated the crowd's favourite IdrA in the first round, put in quite a fight and was able to tie up the series 2-2, but NaNiwa won the deciding game and made it to the final four. A broad victory 4-1 against HasuObs opened the way to the grand finals, where he faced his compatriot ThorZaIN. In spite of a large early lead, NaNiwa was unable of preventing his opponent's irresistible march toward the title, and had to settle with the silver.

NaNiwa had moved from being the black sheep of the European scene to being one of the best foreign players. Thanks to his achievements in the TSL 3 and in the 2011_MLG_Pro_Circuit/Dallas event, he was able to pursue his career in South Korea. He was seeded in the 2011 GSL August Code A alongside ThorZaIN, and wasn't more successful than his rival for the TSL 3 title, as they were both eliminated in the first round. But while ThorZaIN headed back to Europe after a few weeks, NaNiwa stayed in the MVP training house and continued to compete in GSL with little success.

NaNiwa remained one of the most feared competitors in the foreign scene, taking fourth place at the BlizzCon 2011 and second place in the MLG Providence. In this event, concluding the 2011 MLG Pro Circuit, the Swedish player made an astonishing run, defeating NesTea, HuK and DongRaeGu on his way to the grand finals, where he lost to Leenock. On top of his second place in the championship, he won the MLG Global Invitational, at the expense of the three-times GSL winners Mvp and NesTea.

NaNiwa's old demons struck again in the Blizzard Cup, as his behavior came under scrutiny after an infamous probe rush which cost him his Code S seed. He eventually returned to the prestigious league in the 2012 GSL Season 2, where he upset the odds by proceeding to the playoffs, without losing a single match.

Mihaylo "Kas" Hayda is a Ukrainian player from Team Empire. His third place in the TSL 3 awarded him a seed in the fourth season of the StarLeague.

Before the TSL 3 kicked off Kas had already made a name for himself as a very successful player in online tournaments. He was the first player to qualify for the StarLeague through his victory in the TeamSpeak TL Open 8.

After he defeated HayprO in the first round, Kas met NaDa. He took the audience by surprise, crushing the Korean player 3-0 and proceeding to the quarterfinals. His opponent there was Adelscott, who looked very strong against Terran according to his previous victories against Mvp and qxc. Kas did beat the French player, during the night after his second place in the Copenhagen Games Spring 2011, and faced ThorZaIN in the semifinals. The eventual winner of the StarLeague outmatched Kas 4-1, sending the latter into the bronze match. Kas here gained the upper hand on HasuObs, taking home the bronze medal as well as $3,000.

In the months following the TSL 3 Kas had mixed results; he kept performing very well in online events, but he had more trouble in offline tournament. He was indeed eliminated early in both DreamHack Summer and Winter and in the ASUS ROG Summer at Assembly as well. Kas eventually managed to live up to the expectations in live events at the end of the year and in the beginning of 2012, taking the third place of the World Cyber Games 2011 and of the IEM VI - Global Challenge Kiev. This was followed, unfortunately for the Ukrainian player, by two disappointing performances in the ASUS ROG Winter 2012 and in the IEM VI - World Championship. Kas will be eager to show the world a great run in the TSL 4.