Templar Archives (Legacy of the Void)

This article covers the current multiplayer version of this building. For another version see Templar Archives (Wings of Liberty and Heart of the Swarm). 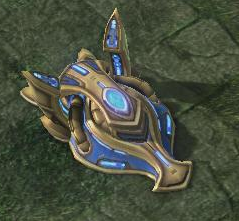 Like most Protoss structures, the Templar Archives can only be warped in at a location powered by the Psionic Matrix. It can only research upgrades while it remains within the Matrix, otherwise it becomes unpowered and cannot function. However, even an unpowered Templar Archives still allows the creation of High Templar.

Getting the Templar Archives on time is important, as even though the High Templar units can be warped in immediately, they will lack their signature Psionic Storm ability until it finishes researching at this structure. Therefore the sooner that the structure is warped in, the sooner that ability can start its research and becomes available to the Protoss player. As this structure is late in the tech tree, this will depend on the construction timings of all of the Gateway, Cybernetics Core, and Twilight Council before it. Disregarding minerals and the unit cost, the whole package from structure warp-in start to ability ready will take a total investment of at least 115 seconds and 400 gas before it can start paying off.