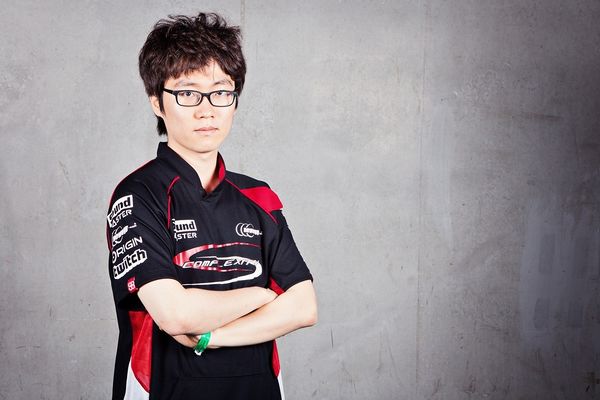 He has since started streaming Legacy of the Void on his Twitch channel.

TheStC used to play for STX SouL during his Brood War career. TheWinD was his sunbae (senior player). When he first started playing in Beta, he had a very hard time. TheWinD invited him to join oGs, which was more of a clan than a pro-team back then.

TheStC was one of the biggest stars during the Beta. Although he was unable to participate in any live events as he was serving in the army, he would occasionally participate in online tournaments. After finishing his military service in May 2011,[1] he began training at the oGs team house again and attempted to make it through the GSL Qualifiers. When oGs disbanded, TheStC was taken in by Quantic, and for a time lived and practiced at the StarTale team house in Korea.

He would be left teamless following Quantic Gaming disbanding on December 4, 2012.

On January 1, 2014, compLexity announced that they had parted ways with TheStC.[4]

TheStC was one of strongest Terrans during Beta, but was unable to expand on his Beta success after launch due to having to leave for mandatory military service.

Despite being in the military, TheStC was able to compete in a few FXOpen Invitationals and Opens, managing to get top placements several times. Recently, TheStC's military service completed, and he has rejoined oGs in the team house. He was fielded a few times in the GSTL, and but did not qualify for the GSL until November 2011.

On January 18, 2012, TheStC participated in the ESV TV Korean Weekly Season 2 Weekly 1. After taking down row, MarineKing, Tassadar, Squirtle, and jjakji to advance in to the finals to face Leenock. He was not able to advance any further and lost to Leenock by a score of 2-4 and ended up taking second place.

On May 3, 2012, TheStC participated in the ESV TV Korean Weekly Season 3 Weekly 3. After taking down RagnaroK, Mentalist, GuMiho, Choya, and Whale, TheStC advanced in to the finals to face TheBest. He wasn't able to grab first place after losing to TheBest by a score of 2-3 and took second place.

On November 28, 2011, TheStC participated in the KSL Daily Week 1 Day 1. TheStC started off from the quarterfinals. TheStC took down Life and Choya in order to advance to the finals. In the finals, TheStC defeated Monster by a score of 2-1 and grabbed first place.

On December 16, 2011, TheStC participated in the KSL Daily Week 3 Day 5. TheStC started off from the quarterfinals. TheStC took down finale and True in order to advance to the finals. In the finals, TheStC defeated AcE by a score of 2-0 and grabbed first place.

On December 19, 2011, TheStC participated in the KSL Daily Week 4 Day 1. TheStC started off from the quarterfinals. TheStC took down cOre and Seal in order to advance to the finals. In the finals, TheStC defeated Choya by a score of 2-0 and grabbed first place.

TheStC qualified for Code S in 2012 Global StarCraft II League Season 2 through the Up&Down matches, where he made his debut on March 29. He got first place in his group upsetting Season 1's champion DongRaeGu 2-1 and beating TaeJa 2-0. In the following round he got two consecutive 0-2 against PartinG and TaeJa, falling back to Code A.

After a successful run through Code A, he earned his Code S spot in the upcoming 2012 Global StarCraft II League Season 3.

After failing to get a Code S seed in MLG Orlando TheStC qualified to Code A where he made his individual league debut against Curious in the first round, and was ultimately defeated 1-2 and fell out of the tournament.

He qualified again for Code A in the 2012 Global StarCraft II League Season 1, where he would defeat LosirA and ForGG in the ro48 and ro32, respectively. However, he would lose to StarTale's Curious once again.

However, in the Up&Down matches he would qualify for Code S 5-2, winning a tense tie-breaking round robin between him, sC and Alicia.

He fell back to Code A after his run through Code S in 2012 Global StarCraft II League Season 2. By beating ByuN 2-1, he earned his Code S spot for the next season.

Though he might not be having the best time in Korea, TheStC competed in the IGN ProLeague 3 after winning the IGN ProLeague Season 3/Qualifier 4 defeating players like Killer and Strelok. He managed to place first in his group stages by defeating White-Ra, MMA and IdrA to advance into the playoffs where he defeated CatZ, SeleCT and IdrA (Again) to lose to the eventual champion, Stephano in the semifinals.

TheStC played in the MLG Orlando where he dominated the Open Bracket, making it into pool play. There, he would get first in his group, dropping only one game to Rain. He would beat Bomber 2-1 in the Winner's Bracket of the Championship Bracket before falling to HuK 1-2 in the following round. He would then lose once again to MC in the Loser's Finals to secure third place.

TheStC participated in the 2012 DreamHack Open: Valencia, placing 3rd/4th after losing to ForGG in the semifinals. In the first group stage, he placed first in his group 3-0, beating notable players DeMusliM and PoYo. He advanced into the second group stage, with a group consisting of HerO, JeaL and TLO. Once again he placed first, taking TLO and JeaL out 2-0, while losing to HerO 1-2. This put him into the Round of 16 which was a best of 3 format. His opponent here was elfi, who he beat 2-1. Onwards he went to the quarterfinals, where he was up against VortiX. Despite many people having VortiX down as the favourite, TheStC managed to pull out a 2-1 victory. This put him against ForGG in the semifinals, who was known for 1 and 2 base aggression and all ins. He lost 1-2, putting him 3rd/4th and giving him winnings of $3,000.

From September 17 to September 18, 2011, TheStC participated in the IPL Season 3 Qualifier 4 TheStC started off from the Round of 64. TheStC defeated desRow, ProphecyRH, NamhciR, Killer, and VINES, in order to advance in to the finals to face Strelok. In the finals, TheStC defeated Strelok by a score of 2-0 and was able to grab first place.

From October 6 to October 9, 2011, TheStC participated in the IGN ProLeague Season 3. IPL 3 started off with a Pools play. TheStC started off in Pool D with White-Ra, MMA, and IdrA. TheStC advanced out of his pool with a score of 3-0 in to the championship bracket. In the championship bracket, TheStC took down CatZ, SeleCT, and IdrA, in order to advance in to the semifinals to face Stephano. He wasn't able to defeat Stephano and lost to him by a score of 1-3.

TheStC participated in the IPL 5 Asian Satellite Qualifiers. The tournament started straight off from the semifinals. TheStC defeated Moon by a score of W-0 and was able to advance in to the finals to face Brave. Afterwards, TheStC took down Brave by a score of 2-0 and was able to take first place. His first-place finish qualified him for the IGN ProLeague Season 5.

On March 19, 2012, TheStC was invited to participate in the IPL Fight Club. His first opponent was viOLet. His debut was cut short as he was knocked out in his very first match up by a score of 3-5, and was not able to dethrone viOLet.

On July 22, 2012, TheStC participated in the 2012 South Korea WCS Preliminaries. TheStC received a BYE in round one and then took down 최성일, Stats, Min, and faced BBoongBBoong in the finals. He was not able to advance any further as he lost to BBoongBBoong by a score of 0:2 and took 2nd place.