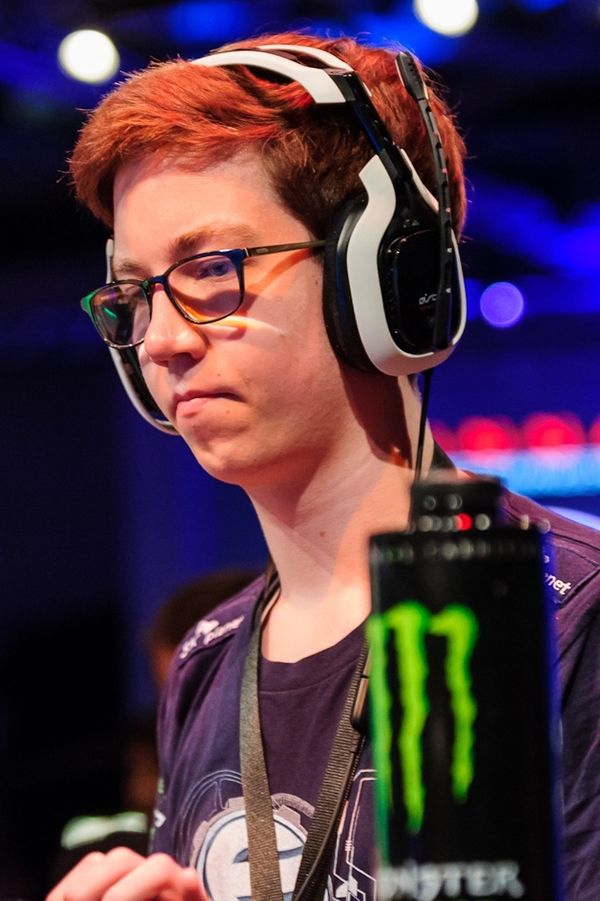 He is a former Warcraft III player.

While originally being a very obscure player who participated in only Nordic tournaments, ThorZaIN gained notable fame and prestige after defeating NaNiwa to win the TSL3.

ThorZaIN is known for his slow, methodical play. His nickname, the Spoon Terran, originated when South Korean netizens remarked that it was as if he was using a spoon to kill his opponent.


After researching everything in his epic game utilizing all units and upgrades culminating in a sky battle featuring Ravens and Battlecruisers against GuMiho, the nickname Scientist Terran was given to him by the casters.

ThorZaIN played for Online Kingdom in the beginning of Wings of Liberty.[1] He did not make a big name for himself in the early stages of Wings of Liberty, only taking part in a few Nordic competitions. One reason for this might be due to ThorZaIN opting to continue his parallel Warcraft III career instead of fully devoting himself to StarCraft II. Nevertheless, the Swedish player managed to win the ESL Viking Cup #9 and continually ranked in the top 40 of the European ladder from late August through early November.[2][3][4][5][6]

On the 3rd of November 2010, ThorZaIN left his old team, Online Kingdom, to team up with the Dutch organization Praetoriani, signaling a definite switch to StarCraft II.[7][8]

"I will from today be a part of team Praetoriani. A newly founded team with some up and coming players. Some of you may know me from WC3 and some of you don't. I haven't really accomplished anything "big" in SC2 yet but that's mostly because I haven't really played any tournament except for the EPS.Nordic (Where I'm doing quite well). Instead I've been practising and improving. I feel that I'm doing great lately and therefore decided to try to get "more serious" with my team and therefore joining up with my old friend and managers from WC3. People who followed WC3 may know that Lloth can be a pain in the ass but one thing is certain: He takes good care of his players and gets things done. It will be a pleasure to once again play in his team."

Breakthrough on the European scene[edit]

Still a relatively discrete player, ThorZaIN managed to qualify for TeamLiquid StarLeague 3 through TeamSpeak TL Open 12. His first opponent in the event was the first champion of GSL, the South Korean Zerg progamer FruitDealer. Despite being the underdog of the match, ThorZaIN eventually defeated his adversary 2-0, showing great patience and good micromanagement. In the next round, he faced the reigning TSL champion (on StarCraft: Brood War), Tyler, and flawlessly knocked him out. He advanced to round of eight, where he was pitted against the heavily favoured MC, twice GSL winner. ThorZaIN soon led 2-0, but MC managed to tie up the series and came back at 2-2. The Swedish player finally earned his spot in the final four by winning the last game with a heavy use of Thors.

A few days after his victory against MC, ThorZaIN was recruited by mousesports, stating that he believed that the German team would become an even bigger name in the StarCraft II scene, and expressing his desire of being a part of it.[10]

Two days after he switched teams, ThorZaIN met Kas in the semifinals of TSL3, and despite TvT being ThorZaIN's worst match-up at the time, he was able to eliminate the Ukrainian player, therefore proceeding to the finals. His final adversary was his compatriot NaNiwa, who outmatched him during the first games, eventually leading the series 3-1. Nevertheless, ThorZaIN managed to win the three last games in a row in order to win the tournament.

Now regarded as one of the strongest European players, ThorZaIN made his first appearance in MLG two weeks after he became the TSL Champion, at MLG Columbus, as a signed-up player. He made his way through the open winner's bracket and eventually earned his spot in Championship Pool Play, where he defeated IdrA 2-0. His run in the championship bracket was however shortened by MC, in a rematch of the TSL3 quarterfinals. ThorZaIN lost 4-2, hence ending at the ninth place of the event, the furthest reaching player from the open bracket.

MLG had the right to grant three Code A spots to top competitors at MLG Columbus. ThorZaIN accepted that offer and participated in GSL August. He also participated in the 2011 Global StarCraft II Team League Season 1 as Mousesports' representative on the combined team F.United.[11] In Code A, his first match was up against YugiOh, who 2 - 1'd ThorZaIN and thus knocked him out of Code A.

However, in his GSTL debut - F.United against MVP in Week 7 of the Jupiter League (Group A) - he showed off his true skills by defeating three Korean opponents who were each playing as different races (NalZa/Won as Protoss, Random player GuineaPig spawning as Zerg and Noblesse as Terran) before finally losing to Genius. F.United still prevailed after NaNiwa beat Genius in the ace match, which meant that F.United became the first team to pull off a GSTL combined European (and Swedish) all-kill and also meant that ThorZaIN was the first European to be named the MVP of a GSTL match. In addition, ThorZaIN tweeted on August 31 that he would be staying at the SlayerS house instead of the WeMade FOX house until he leaves Korea on the 8th, since WMF would be ceasing their progaming operations.[12]

After ThorZaIN fell out of his Code S group, he fell in to Code A to face JYP. On July 17, 2012, ThorZaIN faced JYP to see who would advance to the Ro24 of Code A. He lost to JYP by a score of 1-2 and failed to advance to the next round.

ThorZaIN was initially placed into Group B of the Up and Down Matches of 2012 GSL Season 4. However, due to him wanting to focus on the WCS European Championship as well as other factors, ThorZaIN forfeited his matches.[13]

ThorZaIN was invited to the Dreamhack Valencia Invitational, as announced on September 1.[14] He finished second, losing to DongRaeGu 2-3 in the finals.

ThorZaIN participated in NASL season 2 in the semi-open tournament. He played in the upper bracket -- after defeating a relatively unknown Australian player named Shuffle he would defeat MajOr 2-0, Chinese Zerg Uhen 2-0 and finally CatZ 2-1. His final match in the semi-open would be against Gatored (who had fought through the Loser's Bracket. As a result, their game would be a BO5, with the player in the winners' bracket starting with a 1-0 lead). ThorZaIN would win 2-1 with a final score of 3-2 to enter the Grand Finals at Ontario California. There he would sweep DeMusliM 3-0 in an exciting series and overcome his teammate MorroW 3-1 to enter the semifinals against EG's PuMa. ThorZaIN would ultimately lose 2-4, and would play against Sen in the third place match, where he lost 2-4 taking 4th place. 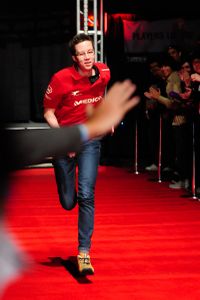 ThorZaIN running to his booth at the NASL Season 2 Finals.

In the mid of December, ThorZaIN was one of eight invites of StarCraft II Across The Galaxy. Taking the Ro16 and Ro8 without dropping maps against Eeel and White-Ra, he lost the first match on Metalopolis against the South Korean Protoss CranK in the Ro4. Coming back from 0-1, ThorZaIN went on to win the next two matches, advancing to the Finals, where he defeated Jim 3-0.

As of March, ThorZaIN was invited to the Iron Squid – Chapter I tournament, playing in Group B against Symbol, Mvp, IdrA and MC, as well as participating in the Red Bull LAN Orlando, an intense training weekend, where he is one of four spotlighted players.[15] After the Red Bull LAN, ThorZaIN participated in the MLG 2012 Winter Championship, where he was seeded into round 5 of the Open Bracket. After victories over NonY and BlinG, the Swedish Terran continued to Pool A, where he went with a 1-4 match score to the second round of the Championship Bracket, where he was eliminated by Golden.

In April 2012, ThorZaIN defeated Polt 3-1 in the grand finals of the Stockholm DreamHack Open. Throughout the entire tournament, he only lost one Bo3 in the second Group Stage to Naugrim and one map to Monster and Polt, with a map score of 21-4 overall. Due to a recent collaboration of MLG and Dreamhack, ThorZaIN also received a paid trip to MLG Spring Arena 2.[16]

On April 26, 2012, it was announced that ThorZaIN was invited to the TSL4 as number 1 seed to defend his title.[17] On the same day, ThorZaIN managed to finally win the MSI Pro Cup. After losing to KeeN 0-3 in MSI Pro Cup 8, he was once again seeded into directly into the Round of 8, where he won over the Russian Protoss TitaN 2-0, before defeating Nerchio 2-0 in the Ro4 and being the sixth time in the finals of the MSI Pro Cup, this time against viOLet. ThorZaIN managed to secure a 3-1 win as well as winning once again another seed into the quarterfinals of the next tournament.

On July 28, 2012, ThorZaIN participated in the World Championship Series 2012 Sweden and ended up in 1st place after overcoming MorroW, Bischu, NaNiwa, Seiplo, and then SortOf in the finals with a score of 1-2, 2-1.

On February 18, 2012, ThorZaIN was invited to participate in the IPL Fight Club. His first opponent was HerO. His debut was cut short as he was knocked out in his very first match up by a score of 3-5, and was not able to dethrone HerO.

On December 4 with the announcement of the Unholy Alliance of EG-TL and their participation in the KeSPA SK Planet Proleague 2012-2013 tournament, Thorzain was listed as one of the participating members.[19] During Round 1 he played 4 excellent games for EG-TL, managing to take a win in his last game of the Round during Week 4 against Classic, being the first foreigner to win a Proleague game in 7 years.[20]

Thorzain has an almost unusually safe and methodical playstyle, owing to his self-confessed fear of counterattacks and base harassment. He largely prefers macro games and is an excellent decision maker, though this may stem from his safe plays - He will back off from a fight unless he's absolutely sure he can press his advantage. Base races are virtually non-existent in his match history and he only very rarely cheeses. Despite the overall slow pace of his play he does not play very defensively, simply preferring a safe, slow offensive push over a quick strike or drop play. A weak point of this style is that ThorZaIN allows his opponent to macro it up as well, sometimes leading to somewhat uneven situations. However, his scouting is decent and he has over time used more and more drop plays to bring his opponent off balance. Despite this, he rarely directly reacts to his opponent's build, instead preferring to push his advantage if ever so slowly with his own current build.