Not to be confused with the American player Titan. 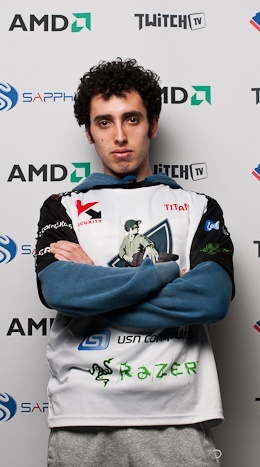 Oleg "TitaN" Kuptsov is a Protoss player from Russia who is currently teamless.

TitaN started playing StarCraft II around June 2011.[1] Before that, he was a Warcraft III Night Elf player.[2]

At DreamHack Winter 2011 TitaN barely advanced from the first group stage, taking second place behind HuK. The second day, he beat NightEnD (who would later advance all the way to the semifinals) 2-1, and Kas 2-0, losing to MaNa 0-2. This put TitaN tied with MaNa for the second place in the group, but MaNa advanced because he won the match between the two players.

At World Cyber Games 2011, TitaN took the professional StarCraft II scene by storm, placing first in his group, ahead of players like IdrA and KiLLeR. In the playoffs, he first defeated KiWiKaKi 2-1 and proceeded to beat the South Korean Terran progamer SuperNova, advancing to the semifinals. There he faced the Chinese Zerg player XiGua, who proved to be too strong for him, sending TitaN to the bronze match. He finally placed fourth, losing 2-0 in the bronze match to another Eastern-European upset, Kas.

On July 2, 2012, TitaN participated in the ZOTAC Cup Monthly Final May 2012. He was able to take down Crane, Revival, Seiplo, and went straight into the finals to face fraer. He took down fraer with a score of 3-0 and easily grabbed 1st place.

TitaN's next premier tournament would be IEM Season VI - Global Challenge Kiev, which he qualified for through beating players like NightEnD and DieStar.[3] However, at the event itself, he was knocked out in group stage, finishing at the last place of his group with a 0-3 record.

From July 21 to July 22, 2012, TitaN participated in the World Championship Series 2012 Russia and went far in the winners' bracket as he took out Creed, LiveZerg, and then sLivko. He fell to Happy in the semifinals and fell to the losers bracket. After he took out sLivko again, he faced Happy again in the finals and won with a score of 2-1, 2-0.