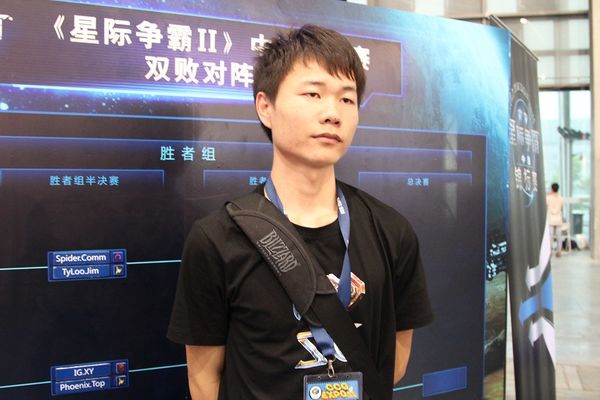 He prefers an aggressive build order and tends to kill his opponents in early games in most of the matches. As a result, he is always compared to HuK among Chinese fans.

From July 2 to July 15, 2012, Top participated in the World Championship Series 2012 China making it all the way to the Winner Bracket Final after overcoming Super, Ezrc, Loner, Jim, XY, He fell to Comm in the winner bracket 0-2 and was subsequently eliminated after losing to TooDming in the Lower Bracket finals with a score of 1-2. Top finished in 3rd place and qualified for World Championship Series 2012 Asia.

Top also competed in the World Championship Series 2012 Asia Finals after defeating Apro 2-0 in the first round, Top went on to face TooDming (The player who eliminated him from the Chinese Nationals), TooDming once again defeated Top 0-2. Top then defeated MacSed 2-1 but was eliminated from the tournament in the following round by Slam. Top finished the tournament in 12th-16th position.

Top qualified for Challenger League in season one through the Invite-Only Qualifier after being controversially left out of the Open Qualifier (along with many other Chinese Professionals). He defeated Fitzyhere before being knocked to the Lower Bracket by Jim. Top then went on to defeat Miya to qualify for 2013 WCS Season 1 Challenger League.

Top was placed in Group F, his first opponent was Minigun who defeated him 0-2. Top would then go on to defeated Xenocider 2-0 and State 2-1 to finish second in his group and qualify for 2013 WCS America Season 2: Premier League.

Top competed Round of 32 of Premier League in Group E. He was defeated by Revival 1-2 and HwangSin 1-2 and fell to Challenger League.

In the Challenger League Bracket Stage, Top defeated 2-0 Capoch, Hack, and Sage to earn himself a spot in the 2013 WCS America Season 3 Premier League.

Top was placed in Group E in Premier League, where he fell 1-2 to HuK and 0-2 to TaeJa, dropping down to Challenger. In the bracket stage, Top defeated mOOnGLaDe 2-1 but lost to Arthur 0-2 in the next round, which placed him in the group stage with MajOr. DeMusliM, and desRow. He first lost to DeMusliM 1-2, but was able to take second in his group after defeating desRow 2-0 and DeMusliM 2-1 in the rematch, which secured him a spot in the WCS America 2014 Season 1 Challenger League.

In the Challenger match, Top faced ViOlet and narrowly defeated the Korean Zerg 3-2, including an unorthodox rubber match, to advance to Premier League. He was not able to move further in the Premier League as he lost to HerO and his Chinese fellow XiGua in Ro32.

Top once again attended the Premier League after a close series against Canadian zerg player, Kane. However, he once again finished bottom place in the Ro32 group stage, getting knocked out from Premier. This was the forth time in a row which saw he qualified to Premier League but finished last place.

Top drew a tough opponent in Seed in his Challenger match and was defeated with relative ease 0-3, unable to qualify for Premier League for the first time since his Premiere appearance in 2013 WCS Season 2.

Although Top was defeated by iAsonu, he still mangaged to get the ticket to Challenger League by beating Ezrc. He didn't return Premier League because he was defeated with 1-3 by MacSed.

Following his joining of Newbee as a Heroes of the Storm player, he stopped practising SC2 until he left this team. Later, it seemed he decided to return to SC2 and played a match against SeRafiNe, where Top lost by 1-2.[1] However, he joined another Heroes of the Storm team, Zero Gaming, on Oct. 15, 2015. He forfeited the SC2 event of NESO 2015. He couldn't return to SC2.