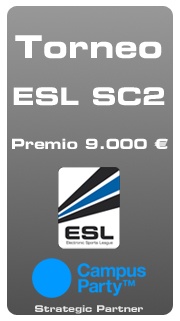 The Torneo ESL Starcraft 2 (In English, ESL Starcraft 2 Tourney, TES for short) is a new Starcraft 2 competition located in Spain, developed by ESL Spain with Campus Party as strategical partner (one of the biggest lanparties in the world and main digital entertainment encounter) that will have 9350 EUR in prizes (approx. $13370).

The first edition of this tournament will take place at the Spanish Campus Party event in Valencia, one of the most beautiful cities in Spain, especially in Summer. This event will be held in Ciudad de las Artes y de las Ciencias, a cute location in this city, near the sea and the city center, with tons of malls and bars where you can enjoy more than just good Starcraft matches.

The tournament will have two stages, Qualifiers and Offline Finals. In order to participate in the Finals, a player must qualify through one of the qualifiers. Winners of each slot will have granted a ticket for the whole lanparty, including camping zone and a camping tent (if they are interested).

There are five qualifiers limited to Spanish players, each qualifier's final two players will participate in the Final Event.

The International Qualifier will be open to 1024 players from all over the world, with the top 3 receiving a spot in the Final Event. Every match must be played on the European Battle.Net server. Matches can not be rescheduled or postponed. Additional rules for this qualifier can be found here and here. Updates regarding rules and dates will be posted on the Qualifier's Main Website

Schedule for this qualifier (CET = GMT+2):

The final qualifier will take place at the event in the Campus Party between July 12 to 14, and the Top 3 players will qualify to the Final Event. As it will be quite hard to get tickets to the event it is not suggested for International players to attempt to qualify via this qualifier.

Final Stage, At Campus Party Valencia, will be held probably on July 14-17. There will be a stadium with PC's and a casting zone to play these finals.