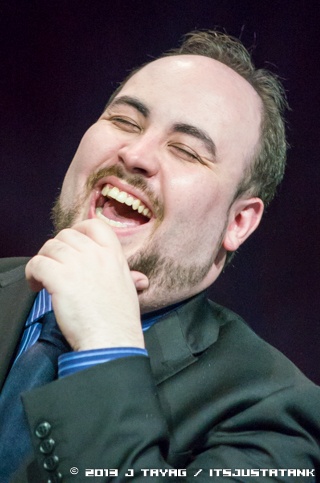 John "TotalBiscuit" Bain was a StarCraft II commentator from the United Kingdom, residing in the United States. He was the manager for team Axiom from 2013 to its disbandment in 2015.[1]
On May 24, 2018, he passed away after struggling back and forth with colon cancer for over four years.[2]

John began his broadcasting career as a DJ at the age of 13, being one of the beta testers for live365, which was one of the first online shoutcast services to become available to the general public. He later went on to manage his university's radio station where he hosted a very popular extreme metal music show. In 2004, TotalBiscuit took his talents from DJ'ing to the world of talk radio, as the owner and operator of WoW Radio. Here, he hosted a variety of radio shows revolving around the MMORPG, World of Warcraft, which ran for 6 years, until 2010, when he stopped creating content for World of Warcraft and started casting StarCraft II matches.[3] In 2005, WoW Radio was invited to Blizzcon in the USA to provide coverage of the event. During Blizzcon, he met Genna, whom he later married. After the wedding, he planned to permanently move to the US, to live with his wife and stepchild. However, the couple ran into problems with the American immigration system and TotalBiscuit was sent back to his home country, the United Kingdom. The family was separated from late 2008 until April 2012, when TotalBiscuit was finally given a permanent visa to live in the US. He reunited with his family on April 28, 2012.[4]

Since the release of StarCraft II, he has become a part-time professional caster, casting various large events such as Assembly and DreamHack. His primary form of income is derived from a YouTube partnership where he operates 2 channels. One large variety-gaming channel with over a million subscribers, and a smaller StarCraft II channel with over 160,000 subscribers (as of July 2014).[5]

TotalBiscuit started playing as Terran, but switched to Zerg after being coached by Sheth on his show, ShoutCraft. After the switch he has found renewed pleasure playing the game.[6] Some time after that, he switched back to Terran.

The majority of his time is spent working on video content for his main channel, with StarCraft II being more of a "passion project" as he describes it, rather than a serious form of income.[7]

On June 4, 2011, TotalBiscuit first announced his SHOUTcraft Invitational, a small invitational tournament, funded out of his own pocket, whose intended purpose is to provided a convenient, lucrative tournament for the professional players, and entertainment for the community.[8] The first tournament took place eight days later, on June 12, followed in the preceding months by three more events, with an ever-increasing prize pool and an ever-evolving format. TotalBiscuit cast the first event himself, with the 2nd, 3rd and 4th events being dual-cast with Apollo.

TotalBiscuit has been streaming his ladder games under the show name "I Suck at Starcraft 2" and starting on the 24th October 2011 he began his new show Showcraft every Monday, Wednesday and Friday at 21.00 CEST which is described as a StarCraft II Variety show, featuring various segments and facets of the game including casting, coaching, custom games and community interaction.[9] Despite the intended schedule, however, TotalBiscuit's other obligations forced the show to go on breaks multiple times, and only 20 episodes have been released by the end of 2012. The money earned from the stream goes towards funding future SHOUTcraft Invitational tournaments.

In February 2012, TotalBiscuit announced a personal, monetary sponsorship of BlinG.[10]

On September 26, 2012, TotalBiscuit and his wife Genna Bain announced the creation of a professional team named Axiom, with CranK as its first player.[12][13]

TotalBiscuit's first significant involvement with Heart of the Swarm came on the 16th of December, 2012, in the form of the continuation of his SHOUTcraft Invitational series, with the production of House of the Swarm, a small tournament involving the three Axiom team members and their two housemates.[14]

In July 2016, TotalBiscuit started SHOUTcraft Kings, a monthly King of the Hill tournament with top players participating. He also was the first announcer to be added into StarCraft II in January 2017.[15]