TotalBiscuit has a long history of creating and funding special events.

The SHOUTcraft Invitational is a series of 1v1 invitational tournaments organized, commentated and sponsored by TotalBiscuit. 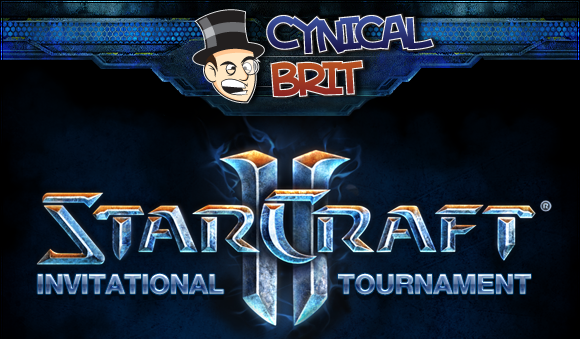 The SHOUTcraft Invitational is a series of 1v1 invitational tournaments organized, commentated and sponsored by TotalBiscuit.

The idea behind the SHOUTcraft invitational was to create a monthly tournament supported entirely by the SC2 community and constructed in such a way as to not encroach on the participants' busy schedules.[1]

8 players are invited to participate in a single-elimination bracket. Matches up to the finals are Bo5 with the final a Bo7. The 1st and 2nd place finishers of each tournament are re-invited to compete in the next one (from the SCI1 and SCI2).

The first round is in a round-robin format, in which each player plays one game against each other player (10 games in total), followed by an FFA (which awards $100 to the winner and has no bearing on the tournament's outcome), and then a BO5 finals between the 1st and 2nd place finishers of the round-robin.

The prize pools for the events, which have increased in every new iteration up to the third event ($1,500, $2,600 and $5,000 for the first, second and third SCI respectively), were financed exclusively through ad revenue from TotalBiscuit's stream and the SCIs themselves, as well as donations from people wishing to support the tournaments.[2]

As mentioned, TotalBiscuit casted each tournament himself, with the first event being a solo cast, and the second, third and fourth being dual casts with his long-time casting partner Apollo. In addition, SCI4 was also casted by ZeratoR, in French, in a separate stream.[3] House of the Swarm was dual casted with TotalBiscuit and Husky.

Upon each event's announcement, the identities of the competitors are released one per day in the TeamLiquid forum thread.

Starting with the third event, TotalBiscuit conceived a new and unique "Tip Jar" feature that allowed spectators and other supporters of the event to donate money directly to their favorite players. In this way, the tournament's participants are able to receive an added cash bonus, which is directly proportionate to their performance and overall popularity.

To eliminate the phenomenon of "meaningless matches", an issue that came to the fore following the controversial incident in the 2011 Blizzard Cup, a "bounty" system was implemented (on a trial basis) in the SCI4. This system entails that should a player find himself in a situation in which he has no possibility of advancement but still has a match to play, that player will be eligible for a $50 "comeback bounty" if he wins the match.

House of the Swarm was unique in that it was a small, friendly HotS tournament between the three Axiom players and their house mates. The prize pool was kept relatively small ($1,000 plus $100 for the FFA) so as to not invest too much prize money into an unfinished game. It was also the first SCI to feature an FFA, with even Husky joining in to duke it out with the five tournament participants. As a way to spice things up, the player who finishes in last place is forced to do the dishes in the house for an entire week. [4]

Best of 5 showmatch for 300$. Sponsored by Club 3D.
The Showmatch was broadcast on December 9th, 2011 by TotalBiscuit.

Best of 7 showmatch for 350$. Sponsored by Club 3D.
The Showmatch was broadcast on January 27th, 2012 by TotalBiscuit.

The showmatch was broadcast on January 30th, 2012 by TotalBiscuit and Apollo. The £1000 prize pool was provided by TotalBiscuit. The match is best of nine, with a map pool determined to be fair in TvP, no vetoes, loser picks the next map.