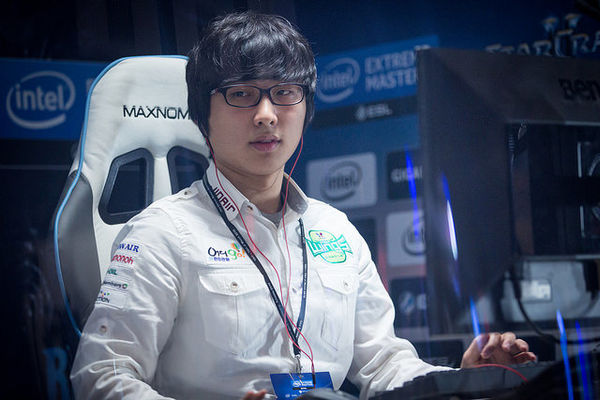 Cho "Trap" Seong-ho (born March 24, 1994) is a Korean Protoss player who is currently playing for Freecs.

Trap played his first official StarCraft II match during the hybrid 2011-2012 Proleague Season 2. With his success in the hybrid Proleague, Trap would be one of the four KeSPA Code A seeds for the 2012 GSL Season 4[1]

Trap proceeded to beat Oz and SuperNova before losing to GuMiho and being eliminated from 2012 GSL Season 5.

Trap was one of the core players for STX SouL in that campaign, holding a 20-17 season record and stepping up in the Playoffs, taking down Bisu, Rain, MyuNgSiK and ZerO. This achievement led to him being named MVP of the Finals, and helped STX SouL win the 2012-2013 Proleague.

Trap played in Challenger League and beat Sniper 2-1, Curious 2-0 and EffOrt 2-1 to be placed into WCS Korea Season 2 OSL. After beating Symbol and Curious, Trap moved on into the Round of 16, where he lost to Maru and SuperNova, won against KangHo and got placed into Challenger League. There, he lost to YongHwa in the Round of 24 and got forced to play in WCS Season 3 Korea GSL Up and Down. Losing to DongRaeGu and beating Squirtle, FanTaSy and YuGiOh was enough to secure spot in WCS Korea Season 3 GSL.

In WCS Season 3 Korea GSL Premier, Trap was placed in Group B, he won his Round of 32 group convincingly by beating KeeN and Reality 2-1 each. In the Round of 16, Trap lost to Rain but was able to win twice against sOs 2-0 and 2-1 and moved into the playoffs. Sadly enough, he met his teammate from SouL, Dear and despite being considered as the favourite, Trap conceded the series 3-0 and was eliminated into Placement matches, where he won against PartinG 2-1 and jjakji 3-1, securing his spot in Season 3 Finals.

In Toronto, Canada, for the 2013 WCS Season 3, Trap got placed into Group B with overwhelming crowd favourites MMA and Jaedong and Genius but was able to sweep his group by winning against MMA and Genius. In the Round of 8, Trap met ByuL and, despite losing the first map, was able to win the series 3-1 and moved to the Round of 4 where he was dismantled by Soulkey 0-3 and lost every chance to qualify for Global Finals.

GSL Season 2 was not pleasant to Trap, and despite winning against RagnaroK, he dropped matches against soO and TRUE in the Round of 32, and being unable to advance into the Round of 16, he fell into Code A again.

Trap played in the Korean Qualifier and after winning against HerO, KeeN, Ruin and StarDust, Trap qualified directly for Pool Play. After dropping series to puCK, Illusion and RagnaroK, he was placed into the Championship Bracket Losers Round 3 and since then, he was able to take down KeeN, HyuN, StarDust, Scarlett, viOLet and win two more series against Polt, finishing the weekend with a 6-0 record over Polt and a 25-12 total map score, to win the first Premier tournament in his career.

Trap was seeded into GSL Season 3 Code S after his performance in Code A where he beat aLive 2-0 and Bbyong 2-0. In Code S, he was placed in Group C with Maru, Reality and Hush. He fell in third place by winning 2-0 over Reality, losing 0-2 to Maru and losing 1-2 in a rematch with Reality.

A few days later, Trap attends Red Bull Battle Grounds: Washington after being invited. In Group A with Bomber, sOs and DongRaeGu he managed to finish in second place winning 2-0 over teammate sOs, losing 0-2 to Bomber and winning 2-0 over sOs once again. In the semi-finals, Trap played against Cure and was shut out 0-3, now in the third place match vs Polt, he ended up losing 1-2 after tapping out of the first match, winning the second, but finally losing on the last map.

Trap was able to participate in the IEM Season IX World Championship by qualifying through the American Qualifier after winning 3-0 over Stats. Trap's run started off with Flash, after a back and forth series, with none of the players taking more than one map in a row, Trap was able to win 3-2. Next, he played against the Korean Terran FanTaSy. He started by winning the first two games, then lost the next two. He took the series 3-2 with a win on Vaani Research Station after holding off some widow mine pressure and pulling himself ahead with some DT/Warp Prism harass. Next he played Dark, although he lost the first game, he was able to win the next three in a row to close the series 3-1. Now in the finals against Zest, Trap started the series by losing the first two games, won the third game on Vaani Research Station, but lost the next two. This concluded the finals with Zest winning it all with a score of 4-1. The longest game of the series was Game 4 where each player made a Mothership and air-based armies.